Stephen Glass was 24 years old when the incident happened. Back then, he was working for The New Republic (TNR) one of the most influential magazines in America. According to him, the work load was gruesome, the pressure tremendous and they are underpaid. But the job was made rewarding by the people he works with and their work, the magazine, was read by the people who matter. So why did the glass shatter? More specifically what made Stephen Glass Break? Long before the actual crack, chipping s from Glass can be noticed.

Don't use plagiarized sources. Get your custom essay on
“ Lies and Truth in Shattered Glass Movie ”
Get custom paper
NEW! smart matching with writer

These chipping as I have called are represented by the words “are you mad at me? ” and “don’t hate me”. These words come out of Stephen whenever he was asked by Michael Kelly or Chuck, the editors of TNR to verify a fact from his story. So why does he say these things? It is because he fears loosing his friends and job. As seen in the movie; Stephen is yearning for acceptance which can be deducted as the primary source of “reward” he gets from his co-workers.

The people in The New Republic find him funny and sweet. They also appreciate the things he says about them and the way he treats them.

Stephen Glass doesn’t want to lose them. Deep inside him is the gnawing fear that his fictitious places, people and events be discovered. If the inevitable occurs; his job and friends will all disappear. The Glass will lose everything. Further chippings. Whenever Stephen wrote/created a story, he would present it to the staff in full color to make each one enjoy the account.

And just when everybody is having such a good time, wrap up by calling the piece “silly”, “stupid” or “not worth writing”. All the time, Stephen knows his stories are incredible.

People even attest to it: A teacher commented that he should write a boring piece once in a while. In these instances, his yearning for acceptance comes out. He wants to ensure that everybody likes his work. Another possible reason is Stephens’ fear of discovery. Almost all his pieces are incredible but he does not know how much incredible is incredible such that people won’t accept it. Most of his stories if read with a clear mind will most certainly be doubted. But the idea alone that he works for a big time magazine company makes it credible.

The topics which he writes about also help in making his pieces credible. The topics he chooses can be considered “secrets” and may seem to be the very types of information to be kept secret from the general public. Most people upon starting a work or job dreams of making it big or garnering success. We’ll never know whether Stephen once dreamt of making it big in the world of journalism. But we do know that he did. We also knew that he lost it: because the cracks appeared. The New York University journalism hand book for students created a list of laws and ethics in order to guide their students in journalism.

Stephen Glass violated three from their list. At the start of the movie glass himself said do not lie about who you are. In order to write one of his pieces, which turned up to be partially fabricated, Stephen masqueraded as member and did not identify himself as a journalist. The second is on quoting which he violated by making up quotes which was not said. It should be pointed out, according to the NYU hand book a quote must be a word for word account of what the interviewee said. The third and greatest violation is on fabrication.

According to the movie 27 out of 41pieces he wrote was either partially of wholly fabricated. Stephen Glass made some mistakes. Major ones. But before we throw stones at him, it must be noted he was still in his early 20’s when the story happened. Just a whelp and somehow the work load and pressure got into him. Glass lied. Someone saw through his veils of fiction and fact, investigated and found out he twisted the truth. The Glass started breaking; small cracks at first. But when it started Caitlin a co-worker saved him or at least tried to.

Chuck the new editor of TNR was bombarding Stephen with questions on facts about a piece called “Hack Heaven”. Caitlin said that Stephen may have made his mistakes due to panic and pressure. While watching the movie, the viewer cannot feel but get angry for Stephen even more because not like Caitlin, I know better. Glass may be just a kid but he can lie his way trough a jurymen without blinking. He admits it. He said during the movie that he knows what moves a person. The Glass breaks. This time long cracks appeared. Chuck found out that Stephen may have lied on more than one occasion.

He comes rushing to Stephen with fury in his eyes and tells him his fired. Stephen never liked Chuck. He may have hated Chuck because the guy replaced Michael Kelly, the editor Glass admires because Kelly fights for his staff. But Chuck also fights for his staff. When the cracks started appearing, the editor was plagued by the idea of the piece being partly fictional. He even tried to protect Stephen from the journalist who found out. But the Glass cracked. And Chuck was the first to see the cracks. One by one he read trough Glass’ articles and realized the incident may have happened before.

Chuck was furious; his fury was fuelled by the discovery of being played as a fool, of reading lines after lines of fiction he will publish as facts, of defending a liar and of hearing and believing Stephen’s lies whenever confronted with the truth. So didn’t he drive Glass to the airport? He is tired of hearing Stephen’s side of the case which always ends up as a lie. Flashes from a class wherein Stephen made a talk as a journalist was seen throughout the movie to explain how far his lies got him. And also to show how much it took away from him once discovered.

And the Glass shatters. You have to know who you’re writing for, and you have to know what you’re good at. I record what people do. I find out what moves them, what scares them. and I write that down. That way they’re the ones telling the story. Everyone lies. But a journalist must not. He cannot. 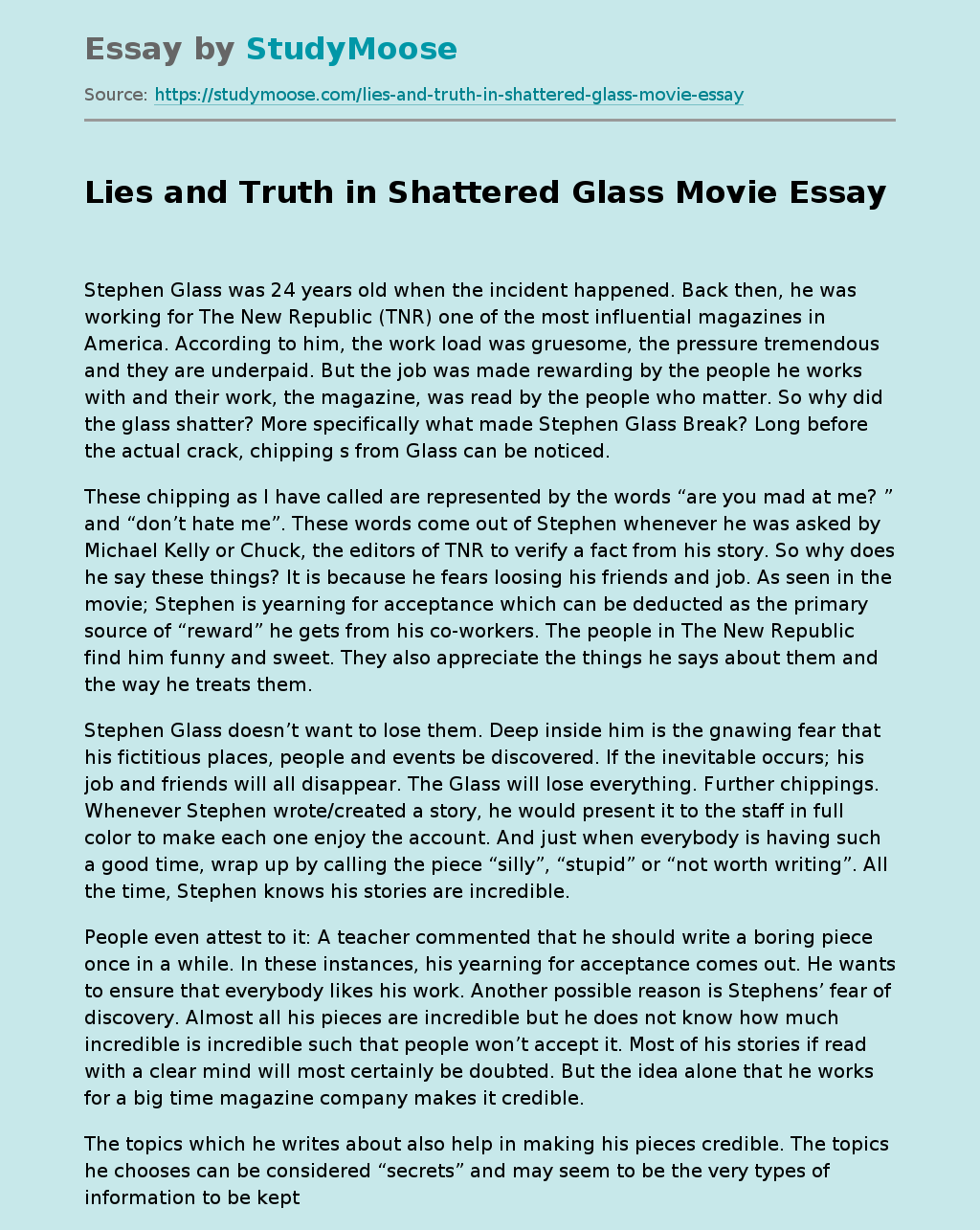