Lies and Truth in A Streetcar Named Desire

Each person has their own perception of reality, that doesn’t always represent what the world really is. Our reality is a blend of attitudes, perceptions and influences from our environment, which is controlled by ourselves. In Tennessee Williams’s play, ‘A Streetcar Named Desire’, all characters create their own reality, through their views on their experiences. It is made very clear that each character has a different reality from one another, emphasizing the fact that everyone constructs their own reality.

Don't use plagiarized sources. Get your custom essay on
“ Lies and Truth in A Streetcar Named Desire ”
Get custom paper
NEW! smart matching with writer

Stanley Kowalski is a very dominating character in the play.

In his reality, he is very powerful, which is evident through his passion for fighting, working and sex. Stanley is not one who can be questioned. He gets what he wants, when he wants it, whether it’s from his mates, or his wife Stella. At the beginning of the play, Stanley is very honest with how he feels to the people he is surrounded by, however, when Blanche enters his family home, Stanley’s honesty becomes deceitful.

We see him ruin Blanches relationship with Mitch, and Stella, as well as send her away. When Stanley rapes Blanche and lies to Stella about it, it is evident that his reality, is not what we as an audience can see.

He is not loyal and honest, he is cruel and shady. At the beginning of the play, Blanche is already seen as a damsel in distress. She has lost her young husband to suicide in earlier years, lost her family fortune and estate, and become a heavy drinker, despite the fact that she attempts to cover that up.

It is evident that Blanche is very insecure about her looks, as well as a fragile individual. It is often that Blanche hides herself from an uncovered bulb, in order to hide particular features she is not fond of.

Blanche relies on male sexual admiration for a sense of self esteem. When she meets Mitch, Blanche sees an opportunity to escape poverty and her bad reputation. She constructs a new identity for herself, to become more appealing to Mitch. Unfortunately, Mitch is not her prince charming, and Stanley once again, ruins a relationship in Blanches life. He sees through her lies, and makes sure that his mate does not get caught up in them. When Stanley rapes Blanche, she becomes very lost within herself, which the other characters in the play, are unaware of.

Stella isn’t feisty like Blanche and Stanley. Her reality is nothing but the one Staley and Blanche have given her. Unfortunately, these two realities are different, tearing her between sister and husband. When Blanche tells Stella that Stanley raped her, Stella choses to believe Stanley, because that is the practical choice out of the two. It is very clear that she is in love with the man Stanley is, when she pleases him. Stella is tolerant of Stanley’s ‘animal-like’ behavior, evident in the scenes where Stanley begins a brawl with his mates and loses his temper quickly.

Stella chooses to believe Stanley’s reality over blanches, and therefore sends Blanche, and reality, away to the asylum. From the first time we are introduced to Mitch, we immediately see that he is more sensitive than Stanley and the rest of the men. He is a lot more mature, possibly due to him attending the constant needs of his sick mother. When Mitch meets Blanche, he sees an opportunity to love again. He wants to play prince charming for her, which he does, through kind gestures such as bringing flowers and Bowing like a gentlemen.

While he does this however, Stanley brings to attention the fact that Mitch is not being his true self. When Stanley tells Mitch about Blanches false identity, he is heartbroken. In the end, he takes reality over fantasy, and let’s Blanche go. In A Streetcar Names Desire, all characters have a different reality to one another. They build these realities through their views on experiences and influences from their surroundings. The book is an excellent reflection of our world. Everyone constructs their own reality, and choses how they look at the world.

Lies and Truth in A Streetcar Named Desire. (2016, Nov 30). Retrieved from http://studymoose.com/lies-and-truth-in-a-streetcar-named-desire-essay 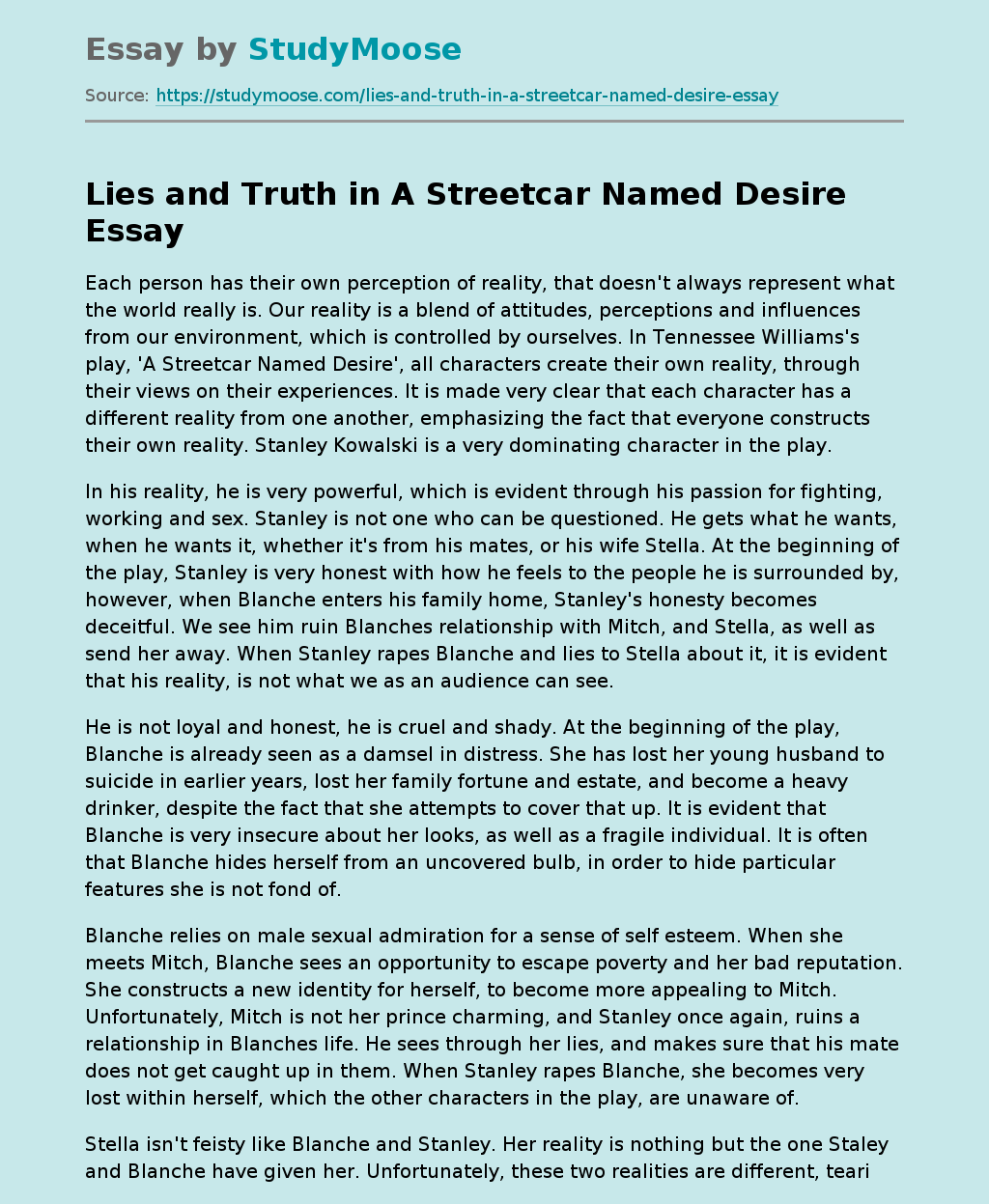