Library and Its Uses

Introduction The root-meaning of the word library is a room or building containing a collection of books for reading. But as there are now circulating or travelling libraries in many countries, the world has undergone a change in its meaning. By the word now indicated a collection of books for reading or reference; Different kinds of libraries: There are kinds of libraries personal, public and institutional. Personal library A personal library is one which belongs to a private person, generally of sufficient means.

Don't use plagiarized sources.
Get Your Custom Essay on Library and Its Uses Just from $13,9/Page

Such libraries grow out of such person’s taste for knowledge and, sometimes, for fashion. There are, of course, small scale private libraries owned by solvent lawyers, educationists and persons of literary taste. But such libraries contain books on some particular subject or subjects chosen according to the taste and interest of their owners. Public library A public library is one which is open to the public. In order to cater to the taste and interest of all classes of people, a public library has to contain books on different subjects and varieties.

Such libraries may be seen in large numbers in every country. Most of these libraries are managed or subsidized by their states. The British Museum library of London and the Central library of Moscow are instances of public libraries. Again, many such libraries have been set up in England and America by philanthropic people like Mr. Carnegie, the American millionaire. Institutional library An institutional library is one which belongs to an institution such as a university, a college, a school, a chamber of commerce, a club or a governmental department.

Such a library is open to the members of the institution concerned and, therefore, generally contains hooks which are needed by them most. Importance of library As acquisition of knowledge depends mostly on reading, man has to read as necessarily as he has to eat. It adds to what he has already learnt and makes him strong and fit for rude battle of life. But for financial difficulties most of the persons who are keen on reading cannot purchase the books they need to read. Hence arises the importance of libraries.

Had there been no libraries, both public and institutional, such persons would have been deprived of their reading. The teachers and the students, in like manner, would be badly affected if their institutions had no libraries of their own. Conclusion Libraries attract people to read and thus create the habit of reading and- stimulate the thirst for more and more knowledge. But for the libraries, there would be no authors, no poets, and no thinkers. The libraries thus help in the advancement of learning and expansion of knowledge.

The library has another very important use. No research work is possible without a well equipped library containing valuable books of all ages, rare manuscripts and old records. A library of this type is thus of incalculable help in throwing light on unearthed subjects. Time passes in an unbroken continuity as does the water of the river. The books of the libraries are a record of this continuity. They thus enable us to know how human society has developed in thought and action step by step.

Library and Its Uses. (2016, Oct 10). Retrieved from https://studymoose.com/library-and-its-uses-essay 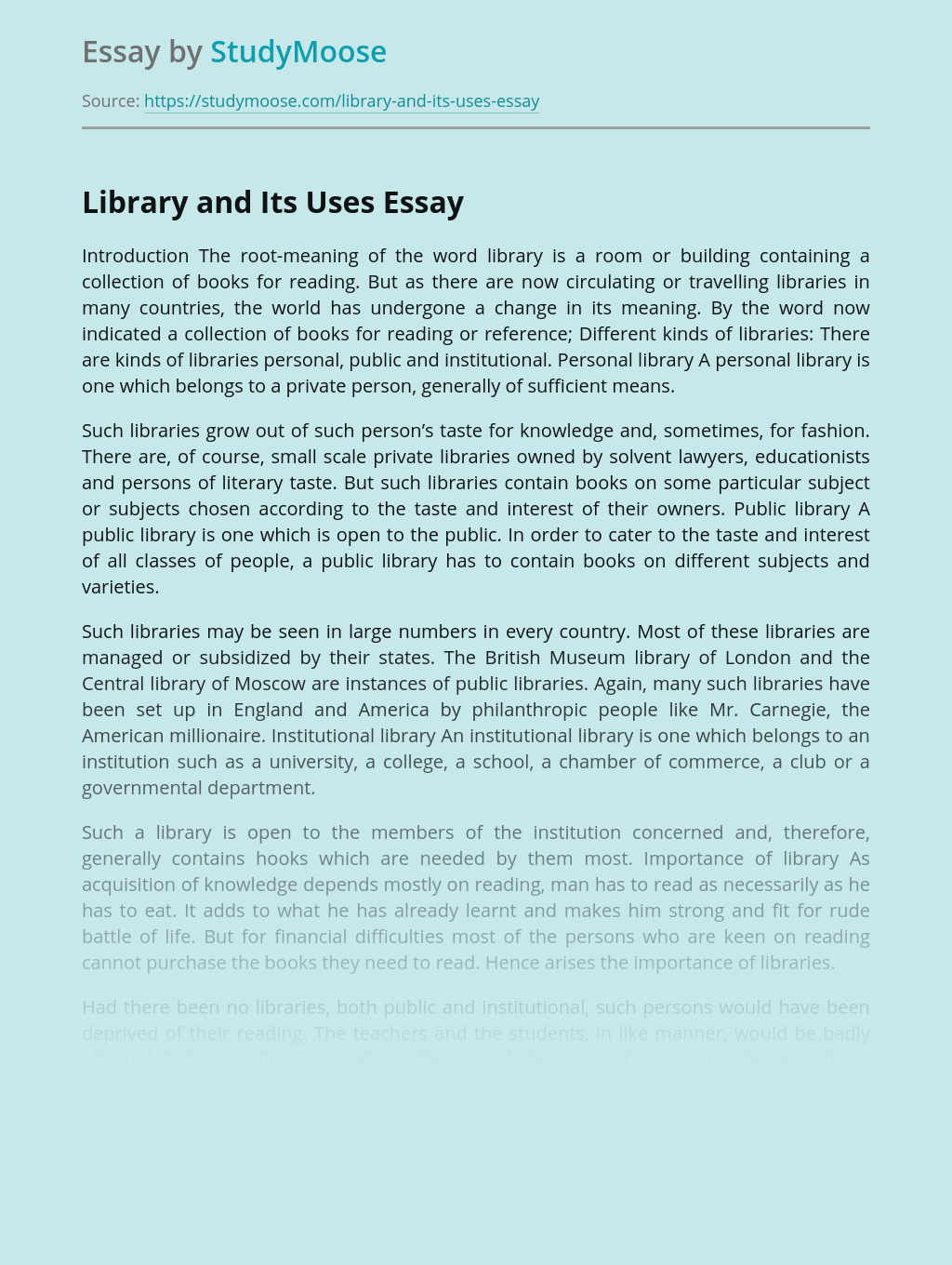 Godot’s 60th: The University of Reading archive reveals the very first night Picture: Roger Photo So why are we still waiting for Godot? How has Samuel Beckett’s play grown from a small avant garde efficiency in Paris to become part of the West End theatre coach celebration circuit? It’s 60 years because Samuel Beckett’s play...

ABSTRACT – In the following essay ,language is explored from its initial stages of development in children. Language can be described in so many formats, due to its diversity and its complexity. One interesting description is from, (Edward Sapir), who sees language as an “art” saying; “Language is an anonymous, collective and unconscious art; the...

View sample
Get Essay
The Postmaster by Rabindranath Tagore

“But Ratan had no such philosophy to console her. All she could do was wander near the post office, weeping copiously. May be a faint hope lingered in her mind that dadababu might return: and this was enough to tie her to the spot, prevent her from going far. Oh poor, unthinking human heart! Error...