When the founding fathers created the government of the United States, they wanted the government not to be so constricting with its rule. In other words, freedom, but freedom in its purest can be dangerous so they had to put some security to their newly made country. They did this by giving the executive branch the power to enforce laws and keep the peace. In the beginning, it was all good but things have changed throughout the years where security had to be increased.

Don't use plagiarized sources. Get your custom essay on
“ Liberty vs Security ”
Get custom paper
NEW! smart matching with writer

Wireless wiretapping also keeps the peace of the United States. As Steven G. Bradbury states in the pro CQR Essay about wiretapping, “taking precautions, such as wiretapping, helps keep America from suffering another 9/11” (Clemmitt). He also brings up another point about the enemies being more sophisticated now because of the “advancements in communication causing and allowing the enemies operate in obscurity” (Clemmitt). This is dangerous for the American public so this wiretapping is necessary but that is not the point the con CQR essay brings up.

Koh, the author of the con essay, mentions that “FASA was made to stop spying on the American public and permit a warrant if surveillance on an American citizen is to be done, it should not be done warrantless” (Clemmitt). Koh doesn’t take into account that the enemy could be an American citizen which would be dangerous to leave unchecked. Koh’s point has been the source of many lawsuits in America but has not gone through thanks to some judges. An issue in San Francisco federal court happened where “a group of AT&T costumers filed a lawsuit against the N.S.A. but the U.S. government stopped them” (Levine). This is necessary so America can keep their security intact.

After 9/11 happened, America was scarred for life. It had cause America do begin a war on terror which were the like no one has seen. “One of the things the military did was hold detainees at Guantanamo Bay to interrogate them. The detainees would be brought to interrogation rooms in shackles and would get extensively questioned” (Kirk). In the pro essay about the CIA amounting to torture Kaye states that “these enhanced interrogation techniques are inhumane and wrong” (Jost). As bad as they may seem, according to CIA veteran John Brennan, during a 2007 CBS television interview, “the enhanced interrogation techniques were able to produce useful information, worked against real hardcore terrorists, and saved lives” (Zakaria and Hosenball). If these techniques got that type of information, then it is keeping the nation safe.

And thusly, America has been kept a safer place. There are still some problems but terrorism has been controlled to not happen often. With the executive branch’s moves to use drones, wiretap, and enhanced interrogation techniques, America is in a necessary state of security. Even though some freedoms don’t seem to be, it is only to keep the peace in the United States and to have a safer nation. 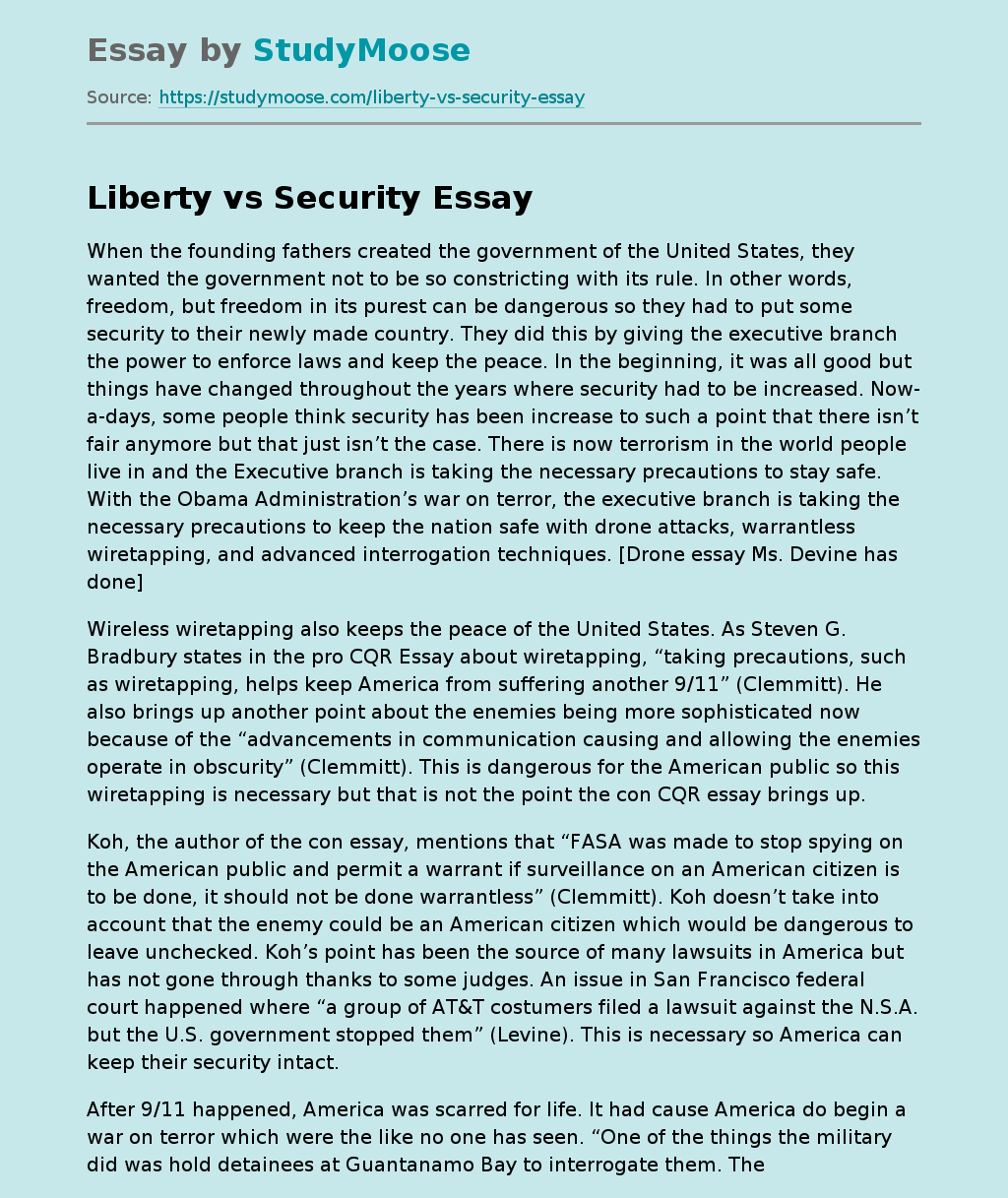