The state is being perceived as an “organised structural and institutional whole” epitomizing the power relations of society. The state in a developing society arise from historical factors and interacts with society through its decisive role in the economic process of the nation.

To study the nature of any particular state, it is necessary to analyse to relation between state, power, and social classes and the purpose of the state. The liberal democratic form stands on the foundation of democracy.

The liberal critique of the Indian state can be read in the writings of Rajni Kothari, Atul Kohli, The Rudolphs, Gunnar Myrdal.

Don't use plagiarized sources.
Get Your Custom Essay on Liberal Nature of Indian State Just from $13,9/Page

The state is associated with modernity. The idea of nation is also linked with the state and is encompassed within it.

The liberal movement did not develop in India, as in Europe, in response to the challenge of aggression of king but after a long anti-colonial struggle against the British Raj which culminated in the Partition of India and its Independence in 1947.

The Constitution which was drawn up shortly after was essentially liberal in character. It was a product of the Western impact through British rule and contributed to India’s constitutional and political development. The constitution declared it as a sovereign socialist republic democratic country. Thus, Indian state is characterized as a liberal democratic model which provides for separation of powers and fundamental rights to the people. Moreover India is a representative form of government, where elections are held on the basis of universal adult franchise.

Ram Mohan Roy, with whom the history of Indian liberalism begins, showed great concern for social reform and the upliftment of women, education as a means of social transformation, freedom of press and no censorship, all of which were inherited by the great liberals of India.

Jawaharlal Nehru, ‘the chief architect’ of the modern Indian State, considered the state to be the ‘trustee and guardian’ of the Indian people by looking after democratic aspirations and providing economic welfare. The influence of Nehru in the Indian state can be seen in the economic front, as it adopted the socialist path of development with a focus on planning for economic development.

India’s liberalism in the modern period may best be described as a re-articulation, a re-articulation that was undoubtedly called forth by the new knowledge, enlightenment, political institutions and social patterns which Britain brought with her.

The liberal view of the state is typically strong. Institutional strength is key in this and state and society remains separate. The state has to remain relatively autonomous from society. Legitimacy is also an important part of the liberal state, and this term started to be used in India especially during the 1975 emergency.

India has been characterised as a ‘soft’ and ‘weak’ state by Gunnar Myrdal. The problem of a soft state is the crisis of legitimacy.

Liberal critics have characterised India as a liberal state with strong institutions of the Parliament, independent judiciary, executive, along with fundamental rights and directive principles of state policy.

Rajni Kothari argued that the Indian state sought to legitimise itself as an order-maintaining institution. The Nehruvian model succeeded during Nehru’s time, but gradually the masses awakened and pressure for redistributive politics grew. Moreover the state was becoming more centralised and lost its mediating structures of the party system.

Ashis Nandy, an Indian political psychologist, envisaged the state as a protector of the interests of the Indian people from outsiders. Although, he noted that the state itself subjected the masses to oppression through institutional structures. He argued that it was preferable as the oppression worked from within and not arbitrarily.

Atul Kohli explains the Indian state through its paradoxical apparatus of state government arising from growth of centralisation and powerlessness at the centre. Centralisation erodes the legitimacy of the state and its developmental power.

Gunnar Myrdal criticized the inability of the state to enforce public policies to eradicate poverty or to enforce laws and dubbed the institutional model of the Indian state as “soft state”. According to Myrdal, the Indian state was soft as it had no power to rectify institutions that stood in the way of reform and development. As a result, it could not tackle the institution of caste directly, take measures of effective land reform, eradicate corruption or enforce ideas of development effectively through the people.

One consequence of this softness has been the growth of left-wing extremism, which Manmohan Singh called the “gravest internal threat” to the country’s security. Myrdal’s ‘hard state’ would have been able to tackle Naxalism which has gravely affected the nation.

The liberal approach focuses on institutions and processes to understand state and political power in India. The state is considered the central instrument of social progress and principal agent of transformation.

According to the Rudolphs, there are two groups characterised in the Indian state, one being the ‘owners of production’ and the other being the ‘labourer’ group. They analysed the state as a mediator between these two conflicting groups, and in doing so, must remain autonomous in order to maintain structural unity of the state. The role of the state would hence be the “third actor”. The Rudolphs believe in the capability of India to become a strong state, unlike the weak state that Myrdal argued.

The bureaucracy played an important role in policy making and reflects good governance. The expertise of the members would provide efficient decision making. Liberal institutionalists believe in strengthening institutions to achive a strong state through legitimacy. This extra autonomy of legitimacy derived from law and ability to rule gets rid of the crisis of legitimacy which is a problem of the Soft State as Myrdal puts it.

Before the emergence period of 1975, India had a paradoxical apparatus of state government. The excess power in the centre made the peripheries unstable, causing the core and periphery to constantly break in tussle. This led to a loss of faith from the people’s side, and re-institutionalising of the state during Indira Gandhi’s time.

The bureaucracy also faces criticisms on account of maintaining neutrality arises if every rule is made by experts. And if the state becomes too reliant on expertise, it becomes idealist in nature.

The Rudolph’s Command Polity talks about the state becoming the utmost power. The Rudolphs pointed out that India is a state that works and derives its legitimacy from demand.This polity in India gave way to crisis. State is not an entity which has always remained stab le. Reflection of individual liberties are a part of democratic liberalism. Demands from the lower class have to be included to maintain stability.

The Marxist view sees the Indian state as a bourgeois state – where the benefits are only with the big industrialists and rich farmers. Though this nature does not completely dominates the state it exercises a powerful influence over the Indian state.

India has a highly plural society marked by various ethnic groups of different language and different religion. After independence India has experienced difficulty to maintain its unity. But growth of violence, regionalism, poverty, slow development of economy has questioned the working of Indian state and its nature.

The impact of social rule is visible in India. Recently, faith in democratic, institution, redistributions, justice and secularism seems to be eroded in Indian state. However, the state continues to solve conflicting interest and development problem.

Threats to individual freedom make it necessary for individuals to organise for civil liberties and constantly explore new realms for free expression. To create stability, the Indian state has to be strong.

Thus today’s India stands as a political and economic paradox of a rich – poor nation with a weak – strong state. 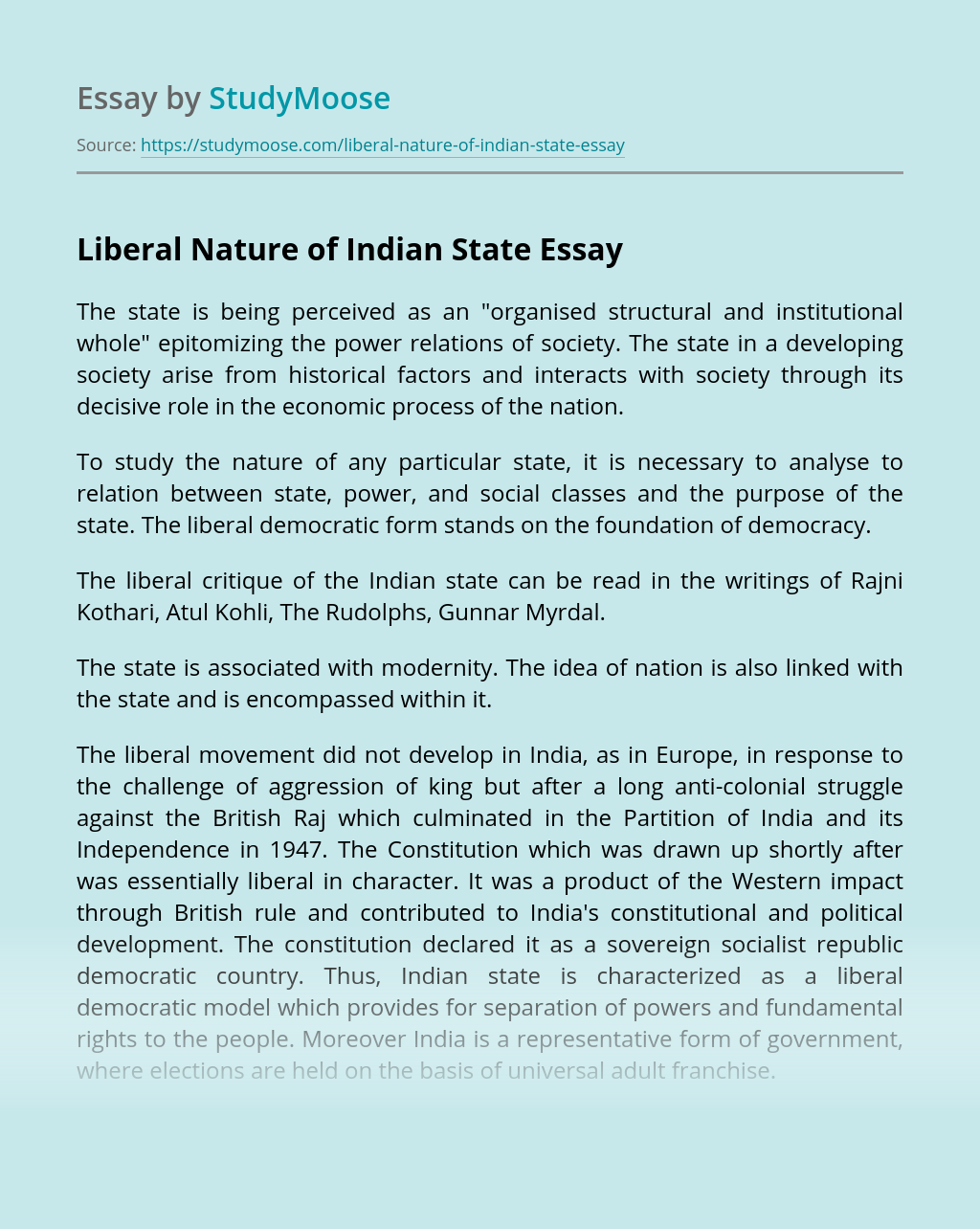 Education is an important tool that is applied in the contemporary world to succeed, as it mitigates the challenges which are faced in life. The knowledge gained through education enables individuals’ potential to be optimally utilized owing to training of the human mind. This opens doors of opportunities enables individual to achieve better prospects in...

View sample
The Impacts of Catherine the Great

In accessing the actual “greatness” attributed to Catherine the Great, Empress of Russia during the European Enlightenment, one must look at all aspects of her rule. Her outgoing personality left her to be described as anything from “terrible” to “great”. She could be deceptive yet honest, humorous yet firm, and light-hearted yet wise. Thus the...

Ideology is a highly contested phenomenon used in politics, social science and philosophical discourse. Heywood (2003, p12) defines ideology as ‘a more or less coherent set of ideas that provides the basis for organised political action whether this is intended to preserve, modify or overthrow the existing system of power.’ According to Freeden (2003) we...

The accomplishment of total liberty can not be achieved without the complete satisfaction of equality. Sir Isaiah Berlin once said “If you have maximum liberty, then the strong can destroy the weak, and if you have absolute equality, you cannot have absolute liberty, because you have to coerce the powerful… if they are not to...

Nationalism is based upon the idea that each individual will be loyal to their nation in which they construct. Nationalists support ‘organic communities’, whereby society is naturally divided, therefore each nation holds their own national identity. ‘Inevitably’ suggests that rivalry and conflict is certain. However, looking at the different branches of Nationalism, the inevitability of...