The Abolition of Man was written by C.S. Lewis in 1943. It was subtitled “Reflections on education with special reference to the teaching of English in the upper forms of schools”. C.S. Lewis was born in 1898 and died in 1963 (same day as Robert F. Kennedy). He was a fiction and non-fiction writer whose most popular non-fiction work was “The Chronicles of Narnia”. Lewis was a Classicist who agreed philosophically with Plato and Aristotle and also considered himself a “Pagan in a World of Apostate Christians”.

Don't use plagiarized sources. Get your custom essay on
“ Lewis’ The Abolition of Man Book Review ”
Get custom paper
NEW! smart matching with writer

Lewis was also a friend of JRR Tolkien. The Abolition of Man is listed as #7 on the top 200 greatest works of the 20th Century. In Abolition Lewis writes of two opposing views: The World off the Green Book vs. the World of the Tao.

“Abolition of Man” is a short philosophical work about moral education. In Chapter 1 “Men Without Chests” the Tao is described as a broad generalization of traditional moralities of the East and West consisting of Buddhist, Hindu, Christian, Confusion, Jewish, Muslim, and Socratic ideologies.

The Tao is the sole source of valued judgments and something we cannot change otherwise the Tao would cease to exist. Within the Tao judgments are either right or they are wrong. Within the “World of the Green Book” all valued judgments and morality are subjective. The green Book itself is really an English textbook used in English upper advance primary schools. The text of the Green book teaches students that sentences containing the predicate of value are not statements about qualities in their subjects but rather unimportant statements about the speakers own feelings.

Lewis believed that this philosophy was out of place in an English text book, regardless of its validity, and proceeds to tear the philosophy apart. The Green book states that objects can merit our approval or disapproval. Lewis describes The Mind of Man in a platonic division of three:

Lewis argues that removing all sentiments from the mind (as rationalists try to do) produces “Men Without Chests”. Lewis believes that making valued judgments are an essential part of clear thinking. In Chapter 2, “The Way”, Lewis hacks away at all other alternative system of values. Lewis goes on to argue that no one can debunk the Tao. To debunk the Tao and have a defensible position against it, one must invoke it. While attempting to debunk the Tao all other systems such as Progressivism, Utilitarianism, and instinct based ethics can be debunked themselves. “Debunking the Tao debunks itself” Lewis write of other systems. Lewis states that all other systems fall apart among further examination and people who try to debunk the Tao are trying to substitute some other system for it. In Chapter 2 arbitrary goals of other systems are described as necessary, progressive, and efficient. Lewis asks of these systems:

What are these goals and why are they desirable? The Tao states that “certain states of affairs are intrinsically meritorious”. To Lewis, Utilitarianism fails because it is a social ethic and that it lacks personal obligation. Instinct based ethics are our moral values that are derived from animal instincts. Lewis asks “Do our animal instincts make our morality?” Concerning ethics Lewis tells us that ethics are not something that tell us what we actually do but rather ethics is about telling us what we OUGHT to do, should do, should have done, ought to have done, and OUGHT to be doing. He goes on to say that basing our ethics on instincts does not make sense and that basing ethics on instincts is basing ethics on what people tell us to do. “People say different things…so do our instincts. Our instincts are at war with each other.” There are times in which we should control and suppress our instincts and that there is no one great instinct we should obey. In summation, ethics cannot be derived from our instincts.

Chapter two ends with Lewis concluding that the Tao is the sole source of all valued judgment and that nothing is intrinsically evil. All evil is the result of twisting something good and that moral progress is “timeless, constant, and unchanging.” Lewis referred to chapter one “Men without Chests” as the present, chapter two “The Way” as the past, and chapter three “The Abolition of Man” as the future. The Abolition of man comes in when one tries to exercise the Tao from humanity, because man cannot be man without it. The Tao is a defining characteristic of man, found in no animals, and nowhere else in the universe that we know of. “To become a race that rejects the Tao is to become something other than human.” I have to admit, “The Abolition of Man” is one of the hardest reads I’ve ever had. I think if there was some way to modernize it and translate some of what Lewis was talking about it could end up being one of the great works of the 21st century. All in all I have probably read this book three times and I’m still a bit confused. My take on it is this; Lewis describes a principle of right and wrong. There is no grey area of the Tao, it is what is intrinsically good in the universe regardless of which philosophy you choose to follow. By trying to discredit what is intrinsically good you are discrediting yourself as any argument that stands against what is all good must contain something that is bad…therefore it is wrong to even try. Ethics are not instinctive and instincts themselves, although natural, are not always good just because they are instinctive. 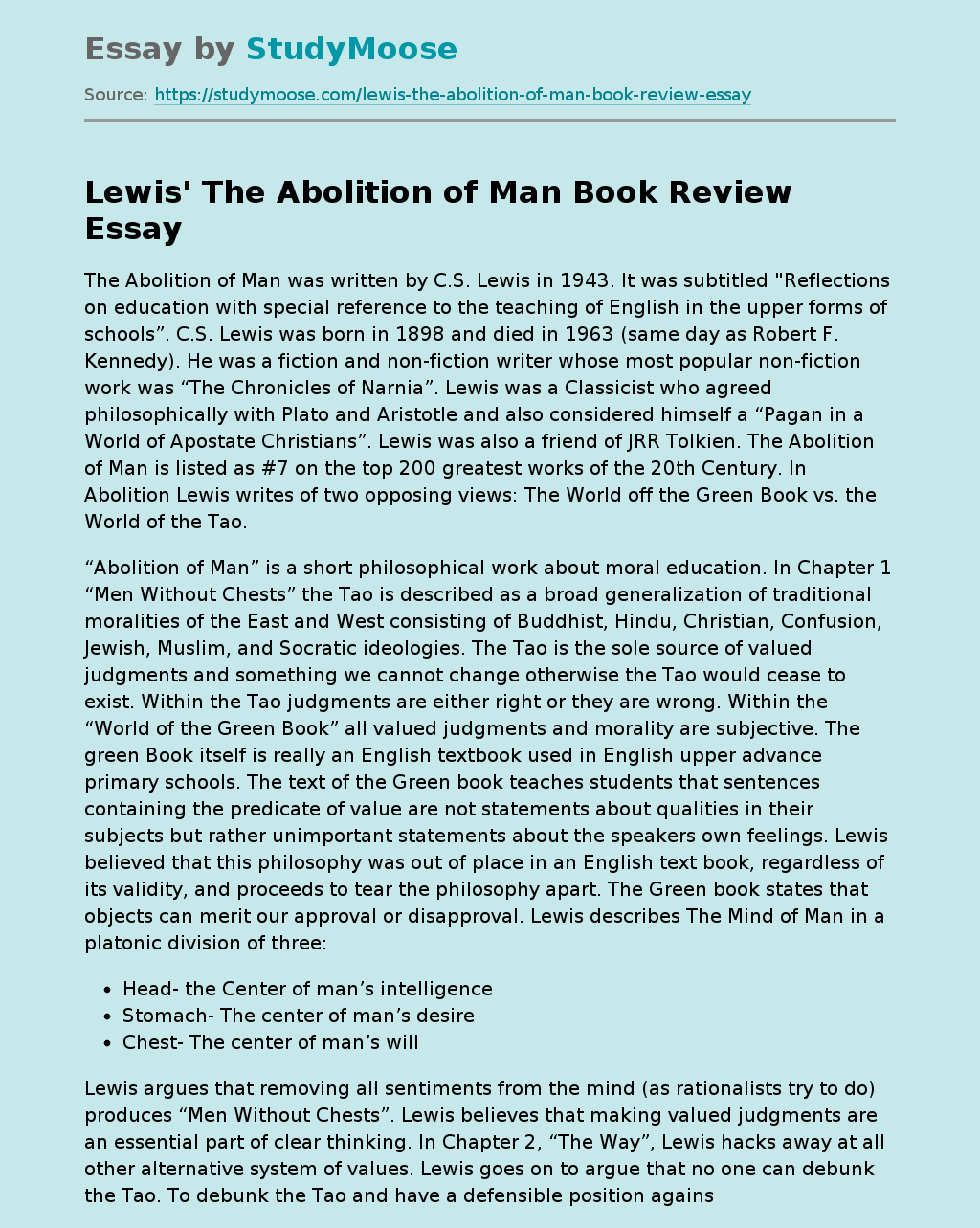