Levi’s Strauss: a case study from an organizational plan point of view

Levis is undoubtedly one of the most recognizes brand of jeans on the planet. The business found by the Strauss family in 1875, initially manufactured jeans for miners out of tent fabric and canvas. However they later shifted to manufacturing jeans from denim which gained popularity amongst miners during the California gold rush.

Strategic elements of an organisational plan

Don't use plagiarized sources. Get your custom essay on
“ Levi’s Strauss: a case study from an organizational plan point of view ”
Get custom paper
NEW! smart matching with writer

This meant evaluation of the current market share and its segmentation, product range of competitors and what the company may want to do about it.

Decision: From the findings of the analysis, the company had to decide on two main factors. What industries to try and expand into and how to be competitive in those industries. As such Levi commissioned market research agencies to carry out survey and research on the habits and attitudes of its customer base.

This was all done with the idea of moving into the higher price clothing market since up until now Levi has mostly produced casual wear of the low price category. After such quantitative surveys the target market was selected.

This target market comprised of Independent consumers with expensive tastes looking for classic designs which are not massed produced and rely on individual styling and fitting. It was then decided by Levi to carry out analysis of its target market in order to study their attitudes and behaviour in details so that further plans to enter the specific market segment can be made.

It was decided by Levi to avoid direct price wars and as a result Levi decided to charge 10% above the prices of it closest competitors. In order to cater to the classic independent nature of the target market segment, Levi also decided to distribute through quality departmental store chains.

The final stage of the decision making process involved carrying out tests for acceptability. This was done through the use of consumer discussion panels led by psychologists and were targeted at seeking out the real motivations behind the way the target market behaved. This led to the understanding that Levi was not just ready to produce classic suits because of the affiliation of its brand identity and value with casual standardised clothes and its strong ties and origins to jeans related clothing. This in turn led to the marketing team to focus on jackets and trousers rather than suits so that it can first overcome its image for casual apparel.

Actions : The final step in the process for developing strategic elements for organisational plan involved the process of bringing all that planning and decision making to reality. The decision was made by levi to emphasise mainly on jackets and trousers in its new Tailored Classics line and so the initial idea of suits was dropped before the new line was launched.

The organisational plan developed by Levi in order to move into new market segments, mainly the higher priced clothing market when put into effect, showed signs of underperformance. This was mainly because of the decision to abandon the manufacturing of suits based on its acceptability test findings. Those findings convinced the marketers in Levi to accept that Levi was too closely associated with casual only wear and customers were not favourable of the idea of Levi producing classic natured suits of non standardised but custom shape and taste. It was later evident that Tailored Classics failed to achieve its sales targets in the consequent months after its launch.

Strategic effects on an organisational plan

The implementation process of the organisational plan drawn up by Levi involved implementing its various quantitative and behavorial reseach findings in its final execution of the organisational plan. This meant moving away from its initial decision to produce what the target customer segment wants and manufacturing jackets and trousers instead. The decision was made on the basis of accpetability test results. In order to overcome the underperformance of the Tailored Classics line in its inital few months prices were reduced to meet sales targets which failed critically. The effects of these on the stakeholders was reduced returns for the investors, and a lack of faith in the brands ability to cater to the custom independent classic demand andconseuquential underperformance of the brand hindering its brand expansion.

To come up with an workable plan, the Levi public relations had to work through a sequence of steps.

The first of such steps was setting out a communication objective. Ideally, whatever the objective is , it is best effective if its specific, measurable,achievable and realistic. The communications objective for Levi was to convey to the customer that levi is able to make a good suit when they put their mind to it despite its origins being in the jeans manufacturing industry and its past history of mostly casual only clothes.

Secondly The Levi staff had to come up with a key message to its stake holders. The most important stakeholders group, the consumers themselves were made aware of the message with the help of the name for the new line “Tailored Classic”. This conveyed the idea that Levi is engaging in the manufacturing of non standardised custom classic wear that were more tailored to the customers individual need.

Having decided upon the overriding key message each seprate group of stakeholders were prioritised and a seperate key message was set for them in order to make sure that most of the stakeholders were addressed and no one felt left out despite the aim of targetting the new line at the higher prices market.

Different communications tactics had to be developed for each of the stake holders groups, ranging from the consumer, the media, the investors and the donors and volunteers involved with Levi.

Finally the budgets and responsibilities were decided upon by the Levi directors based on their surveys and were allocated amongst its different departments and staff.

Following all the steps regarding implementation of the strategic elements of the organisational plan and the process of communicating with the various stakeholders, Levi had to ensure that it was wrking to achieve the objective set. And depending on the results of the various surveys and research, starting from the consumer behaviour patterns and spending habits, the analysis of its target customer segment and finally the acceptability test of its new line before its launch all in term one by one allowed levi to review and change its key messages, communication tactics and finally its objectives. Ths led to the final decision to focus mostly on the jackets and trousers market rather than the tailored suits market because of the lack of the consumer confidence in Levi’s ability to produce tailored suits that meets individual reuqirements. Overall the assessment and evaluation process contributed to a great extent in the final decision to introduce the new line in a much different form than intitally percieved.

Levi’s Strauss: a case study from an organizational plan point of view. (2016, Oct 23). Retrieved from https://studymoose.com/levis-strauss-a-case-study-from-an-organizational-plan-point-of-view-essay 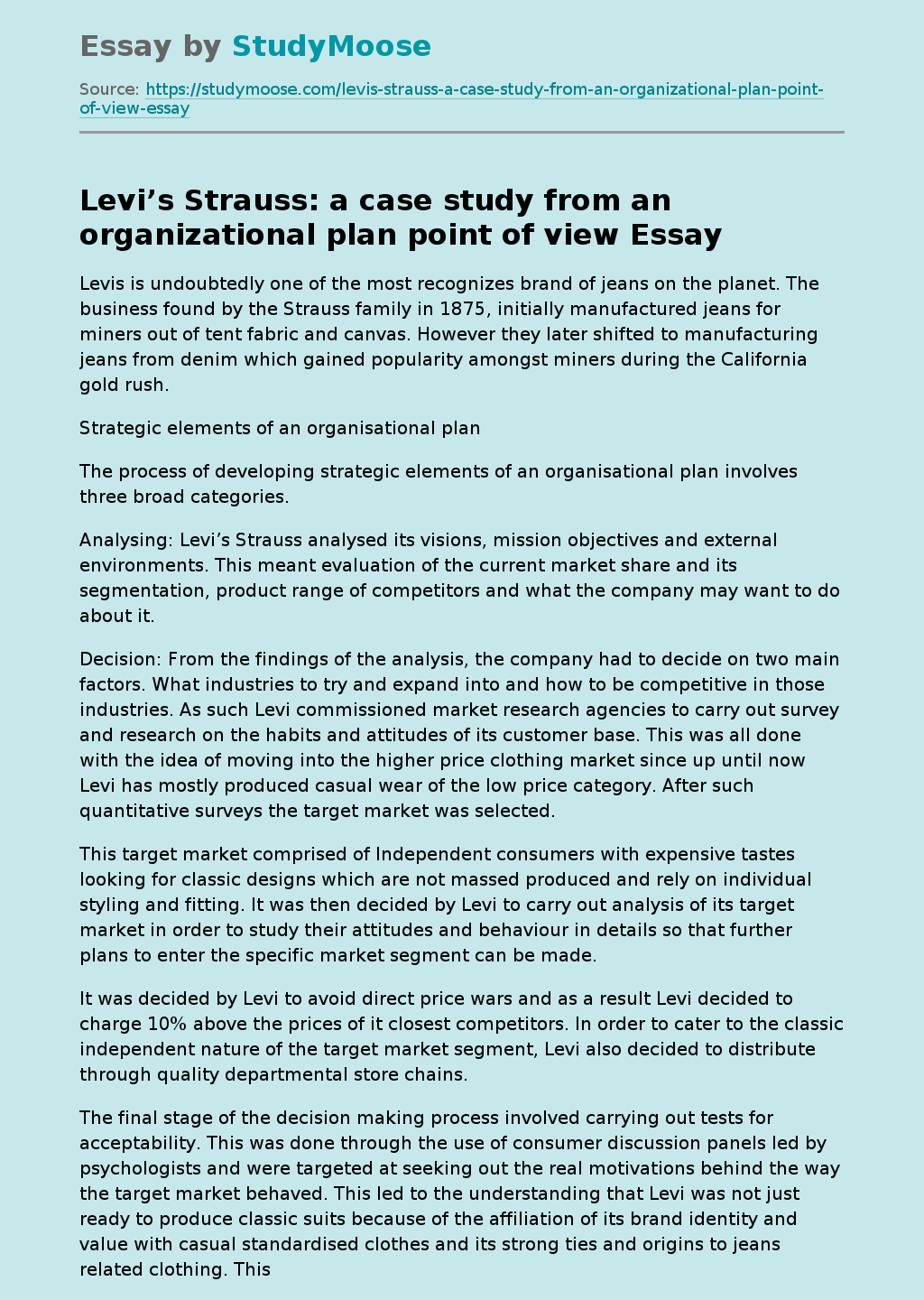