Leticia Servant to Desdemona and Othello

There was great excitement in the household and among the servants when Othello brought his bride home. Othello was a distinguished and capable soldier. He was admired by the people in the senate for his skills as a warrior, but was seen as an outsider and would not have gained acceptance as a person had he not been irreplaceable as a soldier. Desdemona managed to see beyond the armor to the heart of Othello. The love they had for each other was pure.

Don't use plagiarized sources. Get your custom essay on
“ Leticia Servant to Desdemona and Othello ”
Get custom paper
NEW! smart matching with writer

On observing their relationship I believe that Desdemona’s love for Othello was blind, she didn’t allow herself to see his imperfections and ever question his motives and person.

At the same time she was a strong-minded and caring person, who cared more for the well being of others than she did for herself.

In ignoring her own pains she never did strike back at Othello for the way he treated her. When Othello hits her in front of the messengers from Venice, she only stated, “I have not deserved this”. “Some unhatched practice, made demonstrable here in Cyprus to him, hath puddled his clear spirit.

” I have since learned that it was honest Iago that weaved this web of lies and treachery, when he was taken into custody. I believe it was because Othello chose Cassio as lieutenant instead of Iago.

Allegedly Iago tried to convince Othello that Desdemona was having an affair with Cassio. Iago stringed everyone else along, and they took him in their deepest confidence. Yet, in reality he created conflicts by playing on the desires and hidden flaws of every one of us. Including me, I think I knew. As I overheard him talking to himself in Venice; I could only make out some of the words, which were: “I hate the moor…He has done my office… To get his place; and to plume up my will…” I also saw Emilia hand the handkerchief to Iago but thought nothing of it, as I had no knowledge of the handkerchief’s significance.

I think Othello struggled to unify the roles of being a husband and a soldier. He relied strongly on the integrity of his men, which gave Iago the opportunity to poison Othello’s mind against Desdemona. I think Othello wanted to believe his wife, but did not have the courage and composure to confront her with the accusations raised by Iago. Desdemona’s love is what gave meaning to the life of Othello, and thinking that not to be true teared him apart. The soldier who had led his forces to victory in battle numerous times and had the ability to act under pressure that was admired by the senate falls apart when thinking his beautiful wife to be untrue.

It’s just tragic because no one was able to figure out Iago’s treason until it is too late. Although Iago will never live to benefit from the results of his scheme, his scheme worked out like I think he intended. Othello did kill Desdemona and Othello’s future, had he lived, would have been forever ruined by his actions.

I guess this story tells us of the weaknesses of the human heart; how anything but complete trust in each other can destroy a relationship. Failing to confide in Desdemona, Othello allowed Iago to poison his mind and ultimately lead him to murdering his wife. This fairy tale was about Desdemona the sweet, innocent, white princess, and Othello, the admirable distinguished black prince, both but mere dolls in Iago’s ploy.

Leticia Servant to Desdemona and Othello. (2020, Jun 02). Retrieved from http://studymoose.com/leticia-servant-desdemona-othello-new-essay 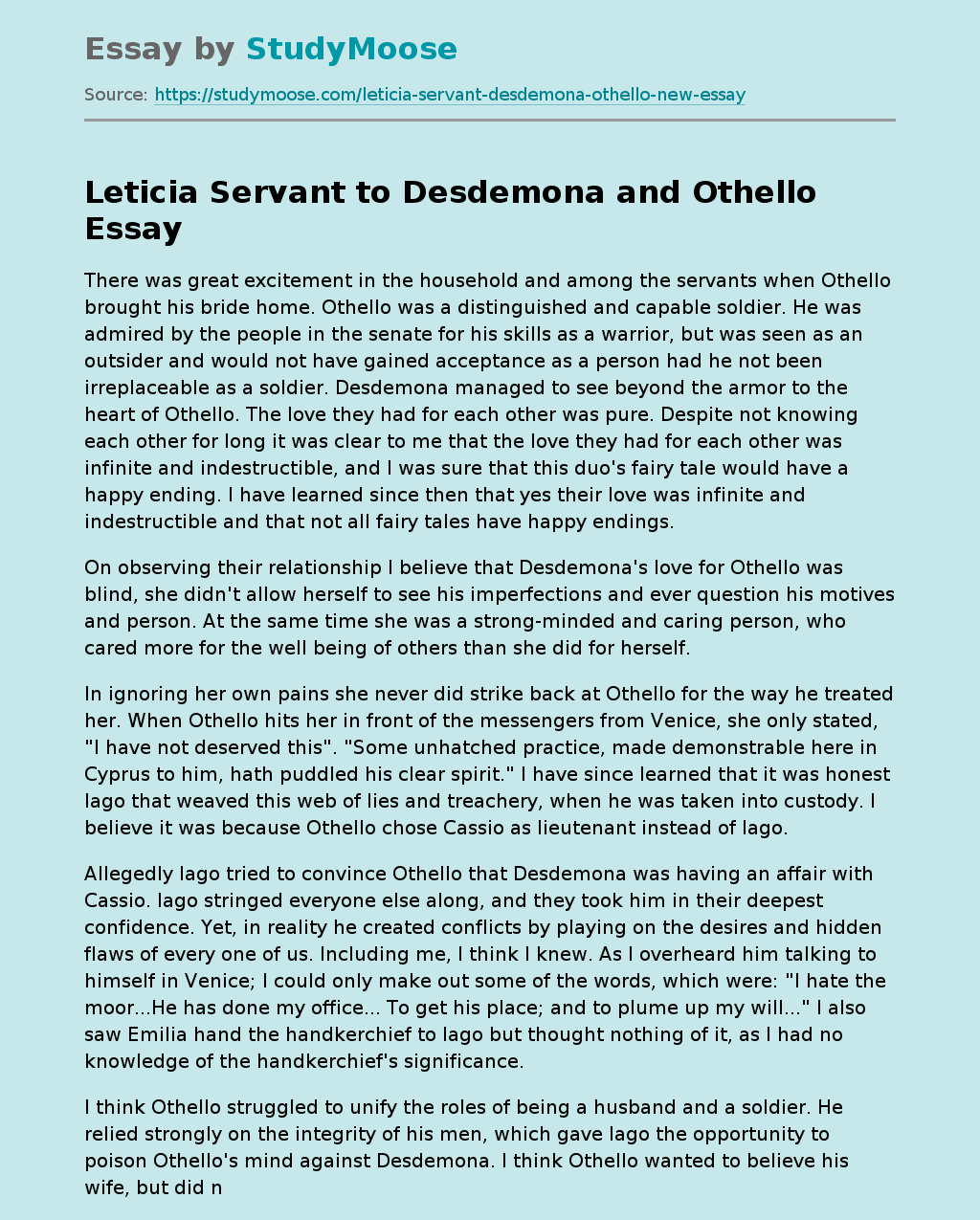