Lessons from Relationships Huck and Finn

Mark Twain’s The Adventures of Huckleberry Finn captures the distinctly American ideals of independence and individualism. The novel serves as a coming-of-age story centered on Huck’s moral journey as he learns to reject the value system imposed on him by Southern society. However, in the last ten chapters, the novel’s enjoyable adventures are replaced with serious overtones.Huck’s increasing maturity leading up to the end of the novel provides a reason for dissatisfaction with the closing chapters, but in fact, Huck shows little moral progression throughout the novel even as he outwardly rejects his societal conscience.

Don't use plagiarized sources. Get your custom essay on
“ Lessons from Relationships Huck and Finn ”
Get custom paper
NEW! smart matching with writer

To relieve the relentless tension between Huck’s growing friendship with Jim and the dictates of Southern morality, Huck continues to cling on to the racist assumptions instilled in him from birth. Eventually, Huck chooses to make an exception for the Jim that he has come to know, and values Jim as a close friend.

Although Huck never truly abandons his racist beliefs, even when he learns to accept Jim’s humanity, the ending fits precisely because it underscores Huck’s method of designating Jim as an exception to the rule.

Notably, in the penultimate chapter, Huck responds to the news that Jim risked his freedom to find Tom a doctor with this statement: “I knowed he was white inside” (706). These words are extremely powerful and serve the point of the entire book. By saying this Huck is trying to say he knows Jim is worth more than any other slave.

He finally realizes that Jim is not an object, rather a human being worth just as much as any white person. Huckleberry refers to Jim as white, proving to himself that Jim has just as much to offer as any white person. He maintains the two disparate categories of whites and blacks and justifies Jim’s humanity by placing him in the first category. The vision that Huck upholds that white people are inherently good, and trustworthy remains ingrained in his mind.

Huck’s relationship with Jim did not penetrate the color barrier. Even though the novel was written in post-civil war, Twain suggests that racism still lingers in the minds of the nation. The reader witnesses the strengthening of Huck’s resolve to free Jim at all costs, yet Huck never completely dispenses with the value system of his upbringing. Huck feels just as ashamed and mortified of his actions as he did several chapters ago, revealing the unshakeable hold that the Southern moral code continues to have over him. Although Huck’s personal connection to Jim may outweigh his racist beliefs at key moments of decision, his experience does not fundamentally alter his views on race. In spite of crucial moments where Huck resolved to “go to hell” and reject his societal conscience in favor of his own moral convictions, Huck reveals his preservation of the white mode of thinking in viewing blacks as inherently inferior. In Huck’s eyes, Jim’s noble actions and capacity for love set him apart from the norm and reveal his humanity, or “whiteness.” Therefore, Huck justifies Jim’s extraordinary display of self-sacrifice by reassuring himself that Jim does not behave like other slaves, for to accept both Jim’s heroic actions and his identity as a black man would mean overturning all of his ingrained notions about blacks.

Throughout the novel, Huck has struggled with his regard for Jim as human and his understanding to label Jim to societal standards. The ending reinforces his coping method—he reconciles the two by making an exception for the Jim he has come to know and love without applying his knowledge to the whole of the black race. Even as Huck classifies Jim as “white inside,” he remains incapable to completely cast off society’s view of Jim and the accompanying racist implications, indicating that his societal conscience still governs his moral compass and causes him to feel guilty for his actions.

The ending of The Adventures of Huckleberry Finn teeters between a novel that successfully communicates Twain’s beliefs about the human nature or a failure due to the final chapters overturning all semblance of Huck’s supposed moral maturation. Further scrutiny of key moments in Huck’s moral journey reveals that Huck merely views Jim as an exception to the rule and retains Southern ideas about racial superiority to the end. Twain maintains a masterful control and direction throughout that intensifies, rather than diminishes, in the conclusion. In spite of the fact that Huck does not completely renounce his societal conscience, he came to appreciate Jim’s nobility of character and value him as a friend and father figure. Thus, through the character of Huck, The Adventures of Huckleberry Finn offers a faint but sure glimmer of hope for redemption.

Lessons from Relationships Huck and Finn. (2021, Sep 21). Retrieved from https://studymoose.com/lessons-from-relationships-huck-and-finn-essay 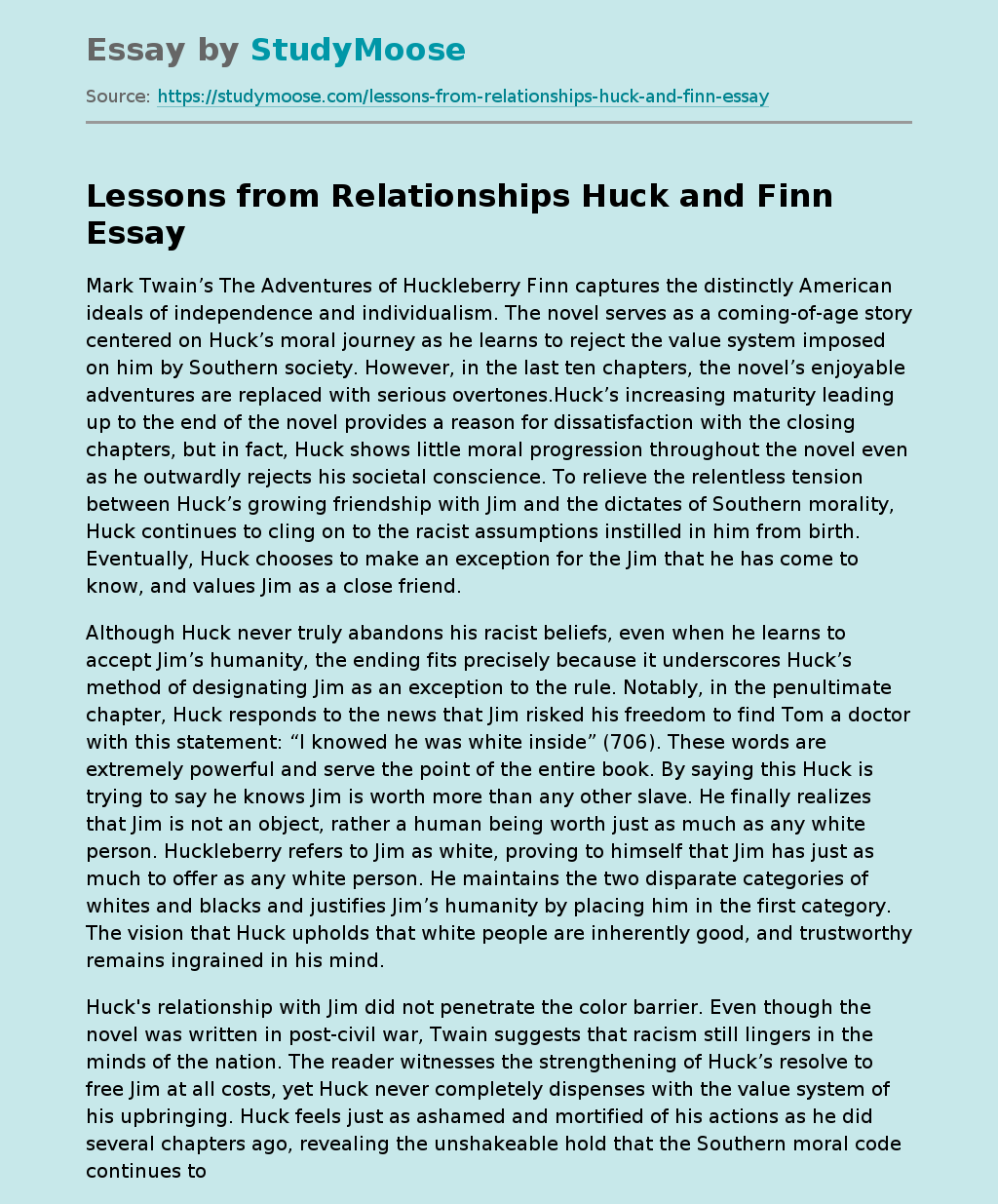