Human emotion is a common trait that can be held by all individuals regardless of culture to a similar wavelength. What is viewed as sad in one culture with high probability can be seen as sad in another given the universal nature of emotion’s visual qualities. Regardless of borders human emotions remain similar enough so that our culture and art can be understood emotionally in others. Leo Tolstoy discusses this universality of art in his book “What is Art?” where he asserts that art can be appreciated amongst all peoples if strikes emotion into the hearts of those viewing it.

Don't use plagiarized sources. Get your custom essay on
“ Leo Tolstoy and Appiah’s Appraisal of Art ”
Get custom paper
NEW! smart matching with writer

Leo Tolstoy shares a similar opinion to Kwame Anthony Appiah. Appiah also asserts that art is a universally appreciable thing and belongs to the human race no matter where it originated simply because putting rules on art has too many contradictions and it is much simpler and far more accurate of a representation if art was treated as humanities property rather than a single country.

Appiah makes these assertions in his essay “Whose Culture is it, Anyway?”. If art is appreciable universally through emotion then Leo Tolstoy’s and Appiah’s opinion on universal art goes hand in hand in that they both argue in favor of borderless appreciation of art but they differ in the application of their assertions. From the very items they try to apply their arguments to the very essence of their appreciation of art both Tolstoy and Appiah share key similarities and differences.

Cosmopolitanism is a way of appreciating art under the direction of Appiah’s argument and deviates from parts of Tolstoy’s opinions of art.

It is easy to see that Appiah and Tolstoy both agree that art can be emotionally valued no matter where it is introduced in some form or another but Tolstoy’s view on art leaves out the native point of view and instead simply analyzes how understandable the art is and decides if it should be considered great from an outside point of view while Appiah simply applies a more cosmopolitan appreciation of art and accepts that it is a creation of humanity and should be protected and seen as a form of art. Appiah talks about how Norse Viking sailing equipment in one of his chapters and treats it as art. This would probably be met with “if that art fails to move men-such art is either bad art or it is not art at all” (267) from Tolstoy since a Norse Viking ship is probably one of the lesser emotion-evoking items discussed in both essays. Tolstoy has a very individual-based appreciation of art that completely disregarded any higher value a work could have.

Appiah on the other hand is adamant in defending what is truly belonging to the human race in those Norse Viking ships as a work of art and an artifact. Appiah has a much more broad definition of art appreciation while Tolstoy has a more pinpoint appreciation of art Appiah and Tolstoy are talking about two very different types of art in their essays. Tolstoy seems to be talking about ancient religious art created long ago while Appiah talks almost exclusively about ancient art from nations that no longer exist. For example Appiah’s strongest points are from his Nok, Norse, and Djenne-Jeno examples. His argument about a cosmopolitan art appreciation is severely limited to works of art that fit under his arguments about “cultural patrimony” (118) which is a term he uses to describe the practice of countries claiming the artifacts of ancient civilizations which happen to be inside their borders although they might not even be descendants of those who created them, creating a dilemma. Tolstoy seems to talk about ancient works that already have been in a sense belonging to many cultures.

However, when Tolstoy does begin to talk about ancient works that “has always been the nature of good, supreme art; the Iliad, the Odyssey, the stories of Isaac, Jacob, and Joseph” (267) he is already talking about ancient religious art and classics that already have been claimed to be triumphs of western progress in the arts. In other words all of these creations that Tolstoy references are already accepted as the property of everyone. All of the works above have existed within the cultures of European culture for almost two millennia by the time Tolstoy had referenced them in his essay and belonged to the greater western European culture.

What can be said about Tolstoy’s perspective about great art with respect to Appiahs is that Tolstoy has a view of art that can only be applied effectively once Appiah’s cosmopolitanism is applied to the subject and accepted as humanities property. To go even further it would seem that whatever is considered the property of humanity under Appiah’s cosmopolitan point of view would be considered great art by Tolstoy’s standards. In these ways Tolstoy and Appiah diverge and reconvene around a larger central theme of universal appreciation.

Appiah seems to differ from Tolstoy in the type of art both of them discuss and leads to a logical fallacy of one and the missed opportunity of another. Tolstoy discusses literature in a strange way while Appiah misses the opportunity literature provides. Tolstoy seems to dig himself into a cultural hole when discussing what great art is since he talks about literature to such a great extent. Written language can only truly be appreciated to its fullest extend while within the authors culture since many colloquialisms or cultural nuances may not be able to be carried over to someone in another culture. Tolstoy mentions that “he is little touched by Japanese song and a Chinese novel” (267) and concludes that those are not great works of art due to his inability to understand them.

However, if Tolstoy were born just two millennia ago in Japan he would have little value for “the Iliad, the Odyssey, the stories of Isaac, Jacob, and Joseph” (267) since they make little sense to him. Tolstoy contradicts himself by talking about literature and trying to put an absolute label on it. This is where Appiah triumphs over Tolstoy with his focus on visual art. Appiah does not meddle too much in the hard battle of discussing the greatness of literature of certain cultures and its place in human cosmopolitan value, however, Appiah misses great opportunities to strengthen his argument by mentioning more literature and how it eventually becomes humanity’s property due to constant translation into new cultures to fit native languages. In this way it is a sort of “cultural telephone” allowing artwork to circulate among different cultures and pick up new value along the way.

Appiah could have greatly added to his essay that literature is a great example of the argument of cultural patrimony being defeated due to the universal appreciation of the art and the ability to be replicated and enjoyed until it becomes the property of the human race. From this missed opportunity from Appiah we can see where Tolstoy and Appiah diverge on their application of artistic appreciation. Tolstoy being more self-contradicting in the process. Appiah discusses primarily visual representations of art being the primary driver of belonging to humanity and Tolstoy’s emotional appraisal of art can strengthen Appiah’s argument due to their similarities. Appiah claims that art is universal and should be appreciated by all, simply because most art is created for public viewing such as visual art that includes paintings and sculptures. Tolstoy, too, enjoys visual art for its emotional ability to influence others.

Tolstoy mentions that “the tears and laughter of a Chinese infect me just as the laughter and tears of a Russian” (267). It’s easily apparent that these emotions are primarily perceived through visual stimulus. It is true when Tolstoy says that emotion knows no borders. Emotions are the very bedrock of human interaction and are universal amongst all human cultures. So if these emotions are primarily appraised through visual stimuli then it must be true that visual art such as sculptures and paintings can convey emotion despite what borders they were created within. Now, if visual art can be appreciated by many it is considered great art, and if great art can be appreciated by many than it is considered too great to be withheld from the appreciation of humanity according to Appiah. Tolstoy an Appiah complement each other nicely in this aspect of their argument despite the many differences that may have been aroused in earlier points.

Tolstoy and Appiah share quite a few key differences in regards to subjects they discuss their broad interpretation of universalism. Tolstoy was guilty of a few contradictions and Appiah could have been far more convincing by delving into literature further to dismantle what he calls “cultural patrimony”. However, in the end Tolstoy and Appiah, when synthesized into a single cohesive argument, can form a very convincing and seamless assertion that great art truly has no borders due to its emotional and visual ability to be understand across any border. 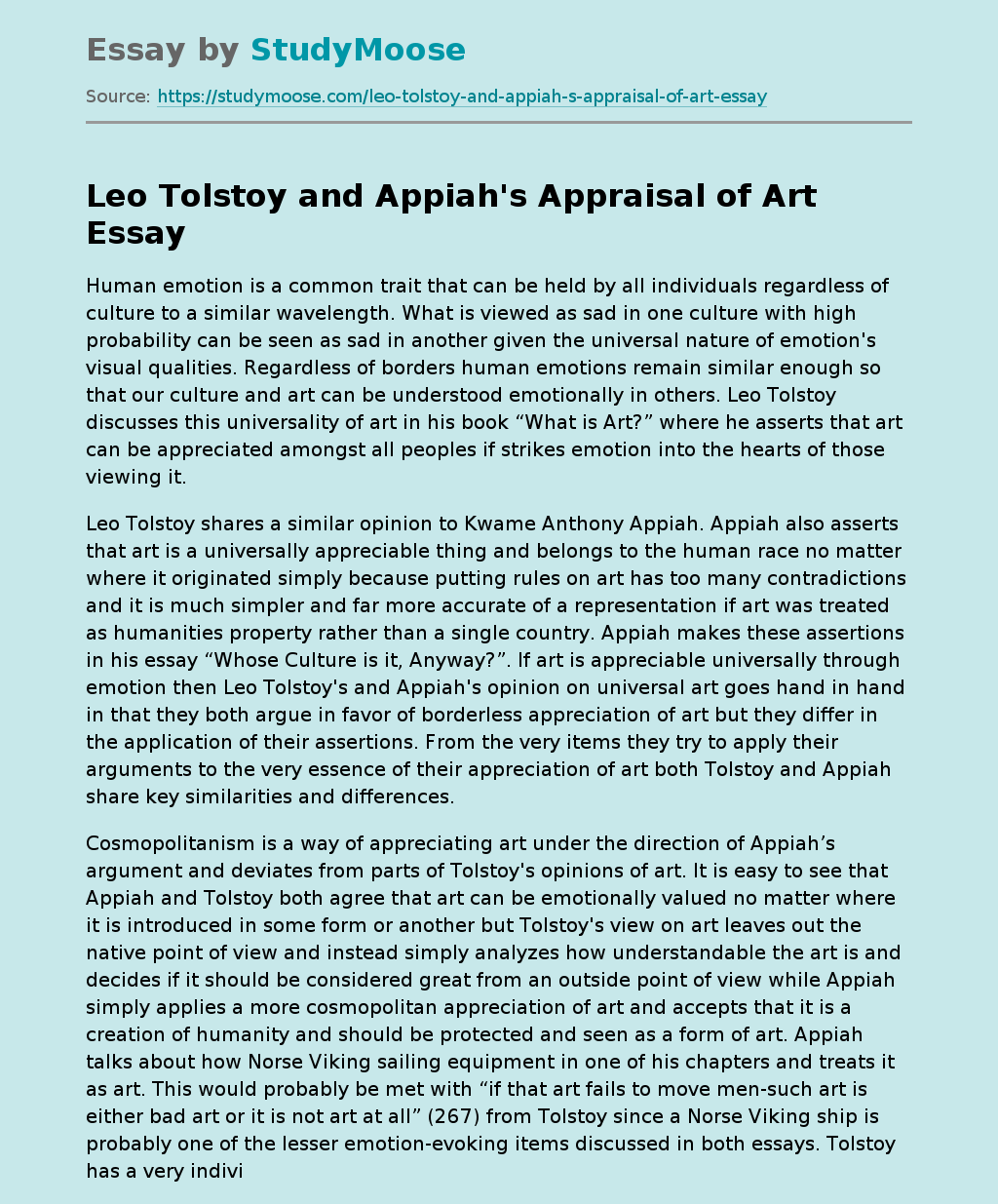