“We despise you. We consider that you should be swept from the earth as government and physically destroyed as individuals. But since we are not strong enough to destroy you today we want you today from this interval to trade with us, to finance us…”. George Kennan commented precisely Lenin’s mayor aim from 1917 to pre WWII. By the Brest Litovsk (December 1917) the man with the “fiery intelligent eyes” (Lenin) came in contact with Germany, thus marking the beginning of a hypocritical foreign policy that would affect all political parties and the masses of Europe.

Don't use plagiarized sources. Get your custom essay on
“ How did Lenin’s foreign policy affect the world? ”
Get custom paper
NEW! smart matching with writer

The overcoming of the provisional government in Russia, was the event that finally gave ultimate power to a benevolent Marxist with the dream of “victory of world revolution”.

No other leader influenced the political spectrum of western nations, nor negotiated with the opposition (capitalist nations) for equality and freedom of the proletariat, although world revolution was not obtained which by no means matters nor compares to the influence imposed on nations due to Russian Foreign policy.

The economic breakdown in Russia, the famine, the Krondstat mutiny and the domestic Russia as a whole shows Lenin’s capability and faith to the Bolshevik of not backing out on communism. It was Leninist-Marxism , where Vladimir Ilych Ulyanov ever-growing desire to form a hypocritical policy to obtain capital, trade and diplomatic recognition was to be found. Even though world revolution did not occur the global impacts of this Russian leader affected all the communist parties alive and its leaders.

Yergeyenic Zinoviev (Lenins close friend) once said “To study Lenin at first hand! To know Lenin is to know the road to victory of world revolution”.

The “indecent peace” (loss of Russian territory) of the Brest Litovsk was thought by Lenin as “signing a treaty of defeat as a way of gathering strength”- this would eventually halt a possible German advance, but more importantly dismiss Russia entirely from war since Lenin believed in times of war that “turning the present imperialistic war into civil war is the only proper proletariat slogan”. The Seventh Party of Congress was launched in March 1918 and began by severe criticism from Bukharin(leader of the Left Communists) because of the treaty signed with Germany. Lenin saw this criticism as unnecessary, due that he though the Brest Litovsk was just a temporary treaty to gain recognition. Proving that Germany was used for the defeat of the provisional government. Germany also wanted the bond to further improve their domestic status, create revolution and then crush imperialist Germany.

The fact that Russia only wanted an “unofficial” treatment in Germany is reflected in a response to a Yekaterinoslav delegate from Lenin : “Revolution is inevitable in Germany it will discard the Brest litovsk”. The Brest Litovsk was believed by Stalin to be one of the “greatest misfortunes”, however Lenin believed that this was needed for the end of tsarim and “just provisional”. This is sustained by a letter directed to one of his closest agents Alexander Shlyapnikov which reveals Lenin hatred to the Tsar: “the least evil now and at once would be the defeat of tsarim. For tsarism is a hundred times worse than kaiserism”. The Brest Litovsk was signed only for Russia to be able to have the support of Germany against the whites and foster what would become later Bolsheviks power in Russia. Besides they were aware of their weakness and feared the union of capitalist states. So they preferred having capitalist nations confronting each other. Eventually after the civil war Lenin wanted to crush German capitalism and decided to alter the foreign policy to the next step from internal revolution to world revolution.

The Kremlins belief was sustained upon the idea of introducing massive propaganda into capitalist nations in “essentiality to the preservation of Communist power in Russia” (1920). All done was to promote revolutionary feelings amongst the working class of all nations ; specially Germany who was shifting on the idea. However, not all countries accepted this mass publications. Karl Radek advised Lenin that Germany was not ready for revolution. Especially because of the just occurred Kapp Putsch (nationalist strike over the government not supported by at the beginning) that was a great opportunity for revolution. Do to the German weakness more propaganda was send to produced a split in the large independent socialist party to the left wing of the party and bring it under Bolshevik influence. This was achieved due to the meetings of the Second Congress. Although, a strike was prepared in Germany in the spring of 1921 which constituted of total failure. This was warned by Karl Radek when he said that revolution in Germany could only occur in long term. Other countries like Latvia, Lithuania and the Finland showed interested in relations with Lenin. Britain was one of the countries to fall in Russian trap. After Versailles Britain had the desire to form a relationship with Russia.

“We have failed to restore Russia to sanity by force. I believe we can save her by trade. Commerce has a sobering influence” was said by David Lloyd George believing that Russia had no intentions of creating world revolution and that trade will finish of the communists. Russia could care less what the Westerners thought. The Bolsheviks would control trade without killing communism and this trade would enhance Russian economy. This was a factor that helped sustain the Bolshevik party. However, the present war with Poland altered the trading conditions due that Poland was being backed by Britain. This and the French hatred of Russo-British relations created a great downfall of German relations. Germany was still a capitalist nations and to be a devoted Marxists, Lenin must not peacefully negotiate with imperialist powers. However, Marxism-Leninism also stated that one could be prepared to do illegal things for the cause of world revolution. This has been a great contradiction for historian views. Historians argue that relations with Germany were not made to crush them later. However, Russia was not a strong country and needed help. The question lies in what would have occurred if Russia had all the power needed. Essentially they would have created world revolution, because they don’t need aid to create a civil war. The Red scare (communist world revolution) threw massive amounts of information to western nations to aid world revolution while trying to form relations with other countries enabling them to have money and trade for later Soviet Communism supremacy in Europe.

Russian relations were not growing well. Leon Trotsky saw this as a curse “the working class in a year or two achieve power. It was a historical possibility, but it did not happen…History has given the bourgeoisie a fairly long breathing spell… The revolution is not so obedient, so tame, that it can be led on a leash as we imagined”. The next and most influential step to Lenin’s global impact was this foreign policy. The policy of teaching the communist working class of every nations. However, a famine in Russia farming decreased its economy, the Polish-Russo war and the Krondstat mutiny created feelings of going back to private property, which affected the Bolshevik power. A capitalist action had to occur to enable stability in Russia. This was known as the NEP (New Economic Policy) which by Lenin was regarded as ” A single step backward, in order to make two possible steps forward”. This was to make use of private and foreign private capital to boost the economy. Since they could not defeat the international capitalist they tried to ask for their help in Russian economy.

This might have not well worked as the Russian planned it. However, it is noted that all this policies were in effect to gain Russian power and later overthrow those capitalist countries who aided them. In fact, Soviet Leader like Lenin and Trotsky referred to Western leaders with derogatory words like “plunderers, pillagers, oppressors, criminals, etc”. This hostility by no means mean peaceful relations between communism and capitalism. Foreign Relations might not have worked as fast as Lenin implied it. However, Russia got her trade, recognition and propaganda. Lenin was achieving his goal of fostering world revolution even though Woodrow Wilson never wanted any kind of relation with Russia, or the harsh crisis occurring in Russia during that time. Lenin masterful foreign policy ironically completed all its short term goals, and failed at the primary goal. However, the global impact on foreign policy given by Lenin was the most important factor of all.

Lenin was a devout Marxist and his contribution to communist parties around Europe has been inevitable. Apart from having written pamphlets he developed a new theory for the organization of the proletariat. The Red Scare he developed introduced massive amount of information to the masses. The Comintern, the Third International, the first, second and third congress foster the ideals of revolution. Lenin is presently know to be Marx-s puppet. He showed the world what was communism and various political parties aroused and are now present because of him. He achieved his goal of civil war though hypocritical relationships with Germany, although they never were proven to be hypocritical because Germany did not end communist. After the Krondstat mutiny, the severe domestic and social situation of Russia it was hard to start a world revolution, however he managed to keep Russia from collapsing to capitalism.

Apart from all the present communist nations like Vietnam, North Korea, Cuba etc, Lenin played a mayor role by the influence he gave Stalin. After all in WWII the mayor contribution to the defeat of Germany was the Soviet Union under Stalin. Stalin followed Lenin’s of a war between “capitalism and communism”. This prediction led to the creation of a stronger Red Army, that if the USSR did not have during WWII it would have probably given victory to Nazi Germany. Lenin was the master of foreign relations. He had the whole world going against him from famine to mutiny and he kept fighting for his goal. Historians argue that there was a high possibility of Germany becoming communist because of Soviet intervention. Lenin has shaped the political spectrum of Germany after WWI and introduced Marxism to the whole world. This leader has played a prominent role in impacting the world by using the method of inculcating a fear of a new political party, a Bolshevik party, one which came to be one of the most influential parties in the world.

How did Lenin's foreign policy affect the world?. (2020, Jun 02). Retrieved from https://studymoose.com/lenins-foreign-policy-affect-world-new-essay 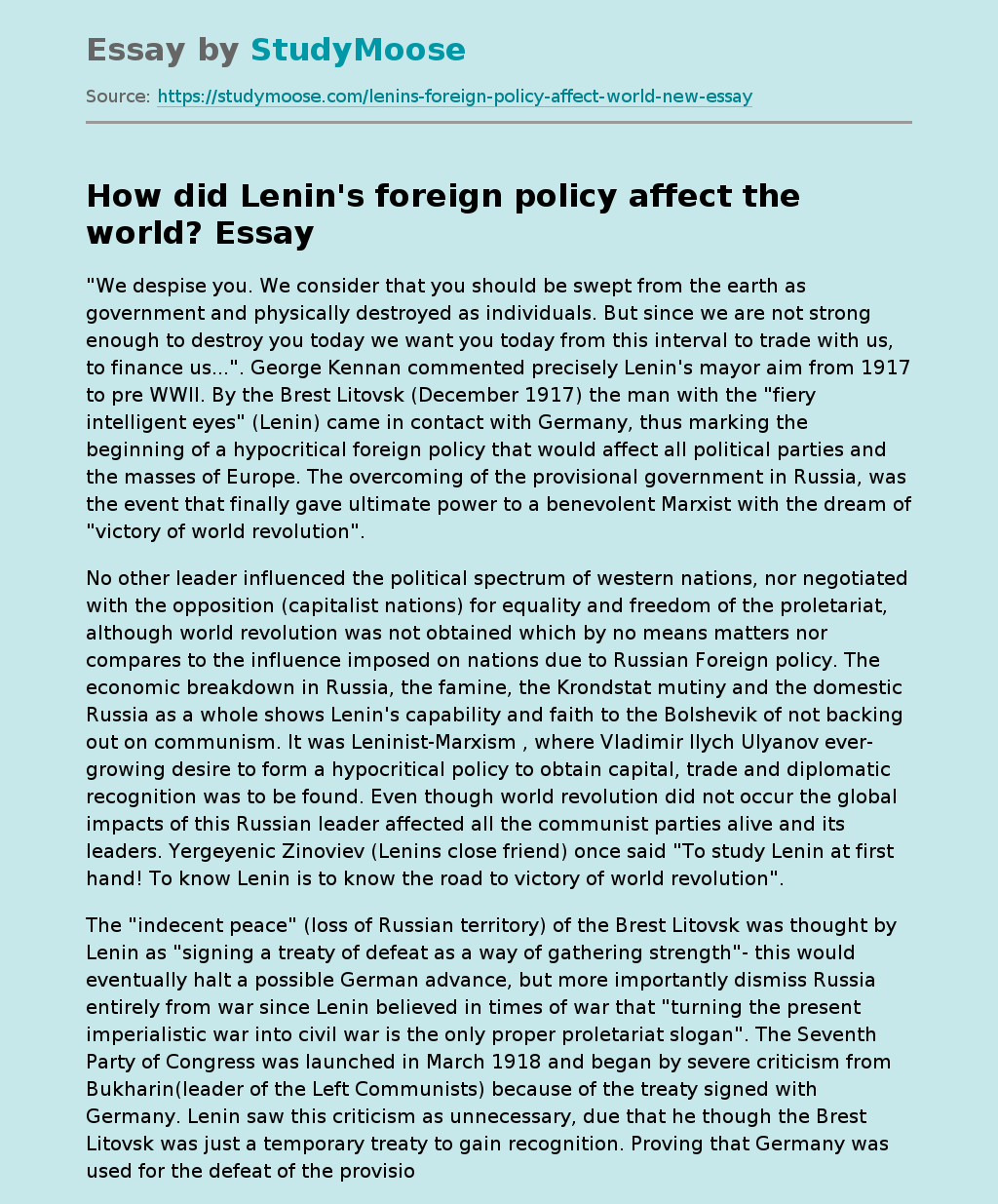