Legrand is the Specialist in Electrical and Digital Building Infrastructures

Legrand is one of the world’s leading manufacturers of products and systems for low-voltage electrical installations and data networks used in residential, commercial and industrial buildings. The Group is a pure player, focused on developing, manufacturing and marketing a complete range of control and command, cable management, energy distribution and Voice- Data-Image (“VDI”) products and systems. Legrand markets its products under internationally recognized general brand names, including Legrand and Bticino, as well as well-known local or specialist brands. Legrand has commercial and industrial establishments in more than 70 countries and sells a wide range of products, comprising more than 150,000 catalog items, in almost 180 countries.

Don't use plagiarized sources. Get your custom essay on
“ Legrand is the Specialist in Electrical and Digital Building Infrastructures ”
Get custom paper
NEW! smart matching with writer

In 2007, the Group had consolidated net sales of ï¿½4,128.8 million (of which 75% were generated outside of France). In addition, in 2007, almost 25% of the Group’s net sales were generated in emerging markets (Eastern Europe, Turkey, Asia/Pacific excluding South Korea and Australia, Latin America and Africa-Middle East).

History of the Group

The origin of the company dates back to 1860 with the setting up of a porcelain workshop on the “route de Lyon” in Limoges (France).

In 1949, the decision was taken to focus exclusively on the production of electrical wiring accessories for installations.

The Group’s manufacturing plants, together with its headquarters, represent its major properties. Legrand operates over 50 manufacturing sites and complexes (including acquisitions) in more than 20 countries and employs between 200 and 500 individuals per site.

The protection of Legrand’s brands is based on their registration and use. Legrand’s brands are registered with national, international and international agencies for variable periods (for example, 10 years in France and 20 years in the United States), subject to laws stipulating continued use as a condition to maintained protection. Furthermore, Legrand holds more than 4,800 patents in nearly 70 countries, some of which relate to the fi ling of the same or similar patented technologies in multiple jurisdictions. Legrand’s patent portfolio is diversified, with approximately 17% of patents held in France, 11% in the United States, 10% in Italy, 7% in Germany, 6% in Spain, 6% in the United Kingdom and the remaining 43% in other countries

Legrand’s patents cover approximately 1,670 different systems and technologies. In 2007, Legrand registered more than 80 new patents. The average life-span of Legrand’s utility patent portfolio is approximately eight years, which corresponds to the average life-span of patents held by the Group’s competitors in its accessible market. Legrand rarely licenses the use of its products to third parties, nor does it license use of technologies from third parties. Given the Group’s research and development efforts, Legrand does not believe that it is dependent on patents to conduct its business.

The group has mobilized all its strengths to adapt to the challenges of a business environment rocked by the financial crisis since summer 2008, and it is continuing its self-financed development.

The fundamentals underlying the performance and solidity of its business model remain unchanged: leadership positions on many local markets ensure pricing power and make Legrand a benchmark. At the same time, a steady flow of orders from a large number of decision-makers limits the exposure to the financing risks that are inherent in large projects. Today 60% of the sales are on maintenance and renovation markets, where demand is by nature recurrent and capital requirements are limited, which makes for added resilience. Finally, some 55% of the costs are variable, while the balance sheet is strong and cash flow vigorous, which means cash flow, more than covers the investments.

Legrand have reworked its business structures in depth for added flexibility and to reap the benefits of innovation more quickly.The organization is thus now based on industrial divisions and global management of purchasing, production and logistics to optimize cost structures and capital employed. At the same time, a marketing strategy cantered on the power of leading brands has given the leverage to broaden the target market and extend its presence. In this, the group also benefit from the strength of a sales force that is close to customers, keeping in immediate touch with the latest market trends. Together, these moves make the group more flexible and responsive, reinforcing our resilience.

Against this backdrop Legrand is building on its multipolar business model, targeting a wide variety of national markets and promising segments that include power distribution, energy efficiency, multimedia networks (Voice- Data-Image), and wire mesh cable management.

Legrand is thus well prepared to deal with the economic downturn and pursue its strategy for innovation with products that are increasingly intelligent and environment friendly. This will enable them to emerge stronger than ever from a period that will be testing over the short term, but will also offer new opportunities over the long term.

In addition to the attractive profile of its market, Legrand considers its principal competitive strengths to be the following:

With its finger on the pulse of the world’s major developments, Legrand is strategically positioned at the heart of the markets of the future. The Legrand group makes close to 30% of its sales in emerging countries, a share that is bound to grow as these countries grow in strength. In 2009, Legrand made approximately 60% of its sales in the commercial and industrial business sectors. In mature countries, 60% of sales are in the maintenance and renovation markets. The Legrand Group operates globally, holding leading positions in at least one business area on key markets: including France, Italy, Spain, Poland, Great Britain, United States, Mexico, Brazil, China and Australia.

This powerful position on these markets gives Legrand major competitive advantages, such as:

In response to growing demand, Legrand offers energy-efficient solutions that keep environmental impact to a minimum at every stage in the product life cycle, from design to recycling. To take just two examples, Cï¿½liane scenario switches and Watt Stopper presence detectors can achieve energy savings of up to 50% in living and working areas. We also offer a special range dedicated to the comfort and safety of the elderly and disabled, providing them with effective communication tools.

The Group’s ambition is to move the markets upwards by offering them products with ever-increasing added value. Legrand is continually enhancing its offer and creating value for its entire economic sales channel.

The group is also focusing its development on solutions for the great majority. In 2009, within the framework of a partnership with the “Helen Hamlyn Centre”, Legrand carried out a study on the habits and requirements of populations in India with regard to access to electricity. The aim of this study, based on work carried out in the field, is to develop solutions specifically adapted to local needs. For example: an affordable socket providing secure and efficient access to electricity and lighting, or more sophisticated systems for dealing with problems of shortage of electricity, particularly in rural areas. These solutions should come into being in the near future and improve the life of less favoured populations.

As a world specialist in electrical and digital infrastructures for buildings, Legrand believes it also has a mission to ensure that the greatest possible number of people have access to electricity, throughout the world. Its partnership with Electriciens sans frontiï¿½res and its donations of equipment are concrete examples of the Group’s geographical and community involvement.A commitment that can be seen in a dozen or so projects in Africa, Asia and Latin America.

Electriciens sans frontiï¿½res (Electricians without borders), an international social NGO mainly focusing on development work, is a standard in the field of energy.The Legrand Group is one of the leading partners in the association. It supports Electriciens sans Frontiï¿½res’s actions to provide access to energy services, thus contributing to local economic development and the improvement of health and educational infrastructures.

Electriciens sans frontiï¿½res is actively involved in supporting those involved in local electricity systems. Electriciens sans Frontiï¿½res favours projects providing environmentally-friendly access to energy and water and those which incorporate energy efficiency, demand-side management and the use of local resources to meet growing needs.

Legrand is the Specialist in Electrical and Digital Building Infrastructures. (2020, Jun 02). Retrieved from https://studymoose.com/legrand-is-the-specialist-in-electrical-and-digital-building-infrastructures-essay 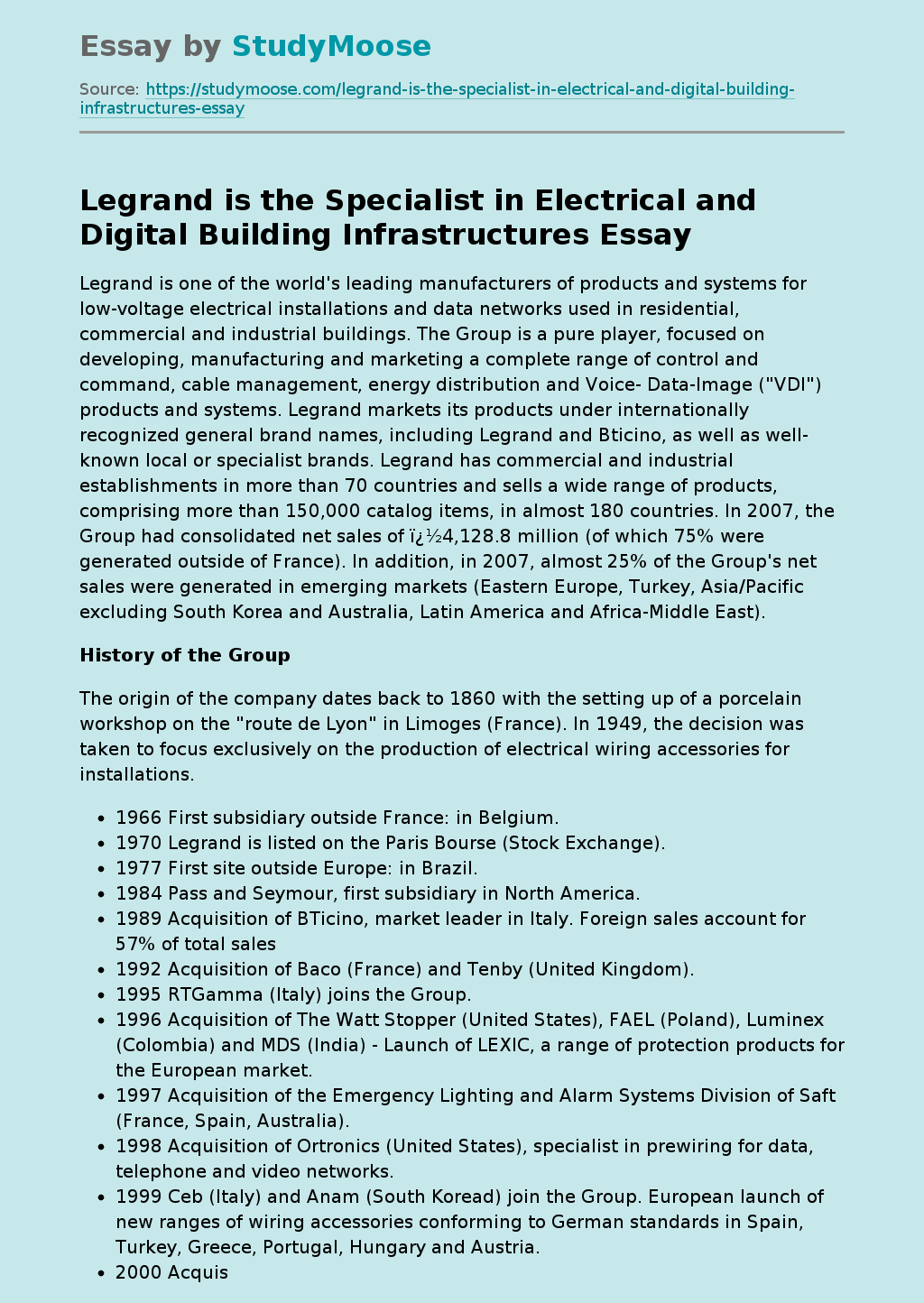