BODY PARAGRAPHS:
I. Topic Sentence that supports the thesis: Making Marijuana legal will save the U.S. government and the average tax payer a lot of money. ­­­­­­­­­­­­­­­­­­­­­­­­­­­­ Example: Billions of dollars are spent every year to arrest and lock up Marijuana users. Example: Taxpayers have to bear the cost for the expenses: food, housing, health care, attorney fees, court costs, and other expenses for these people. Example: In addition, if marijuana were legal, the government would be able to collect taxes on it, and would have a lot more money to pay for effective drug education programs and other important causes.

Don't use plagiarized sources.
Get Your Custom Essay on Legalization of Marijuana Just from $13,9/Page

Closing or Transitional Sentence: We would have more money to spend on more important problems if marijuana were legal.

II. Topic Sentence that supports the thesis: Legalization of this drug would reduce drug-related crimes. Example: All illegal drugs are expensive because their production, transportation and sale are very risky. Example: People with drug addictions must often resort to theft and other crimes in order to generate the funds necessary to purchase these types of drugs.

Example: Legalization would reduce the risks, the prices, and, therefore, the crimes. Example: In addition, crimes related to drug disputes would also be reduced once Marijuana becomes a legal drug. Closing or Transitional Sentence: Not only could the legalization of Marijuana save the lives of drug dealers and their clientele, but it could also save many terminally ill patients from suffering.

III. Topic Sentence that supports the thesis: Marijuana can be used as a treatment for certain medical conditions. Example: Marijuana could be used to treat terminally ill AIDS patients by stimulating their appetite so they can resist emaciation (drastic weight loss). Example: Smoking this drug will alleviate the severe nausea that is a common side effect of chemotherapy. Example: In addition, Marijuana has been known to ease the pain of severe migraine headaches. Closing or Transitional Sentence: Since it is evident that Marijuana could be a valuable drug in the fight against many terminal diseases, it should be legalized.

CONCLUSION:
Repeat the idea of your thesis: By lifting the ban on marijuana use and treating it like other drugs such as tobacco and alcohol, the nation would gain immediate and long-term benefits. Summarize/Reinforce the outline of the body: Marijuana, a common and easily produced wild plant, could be beneficial to many if legalized. Return to a general level of the subject: Prohibition does not work. Education and treatment are better to address the drug problem in this country. 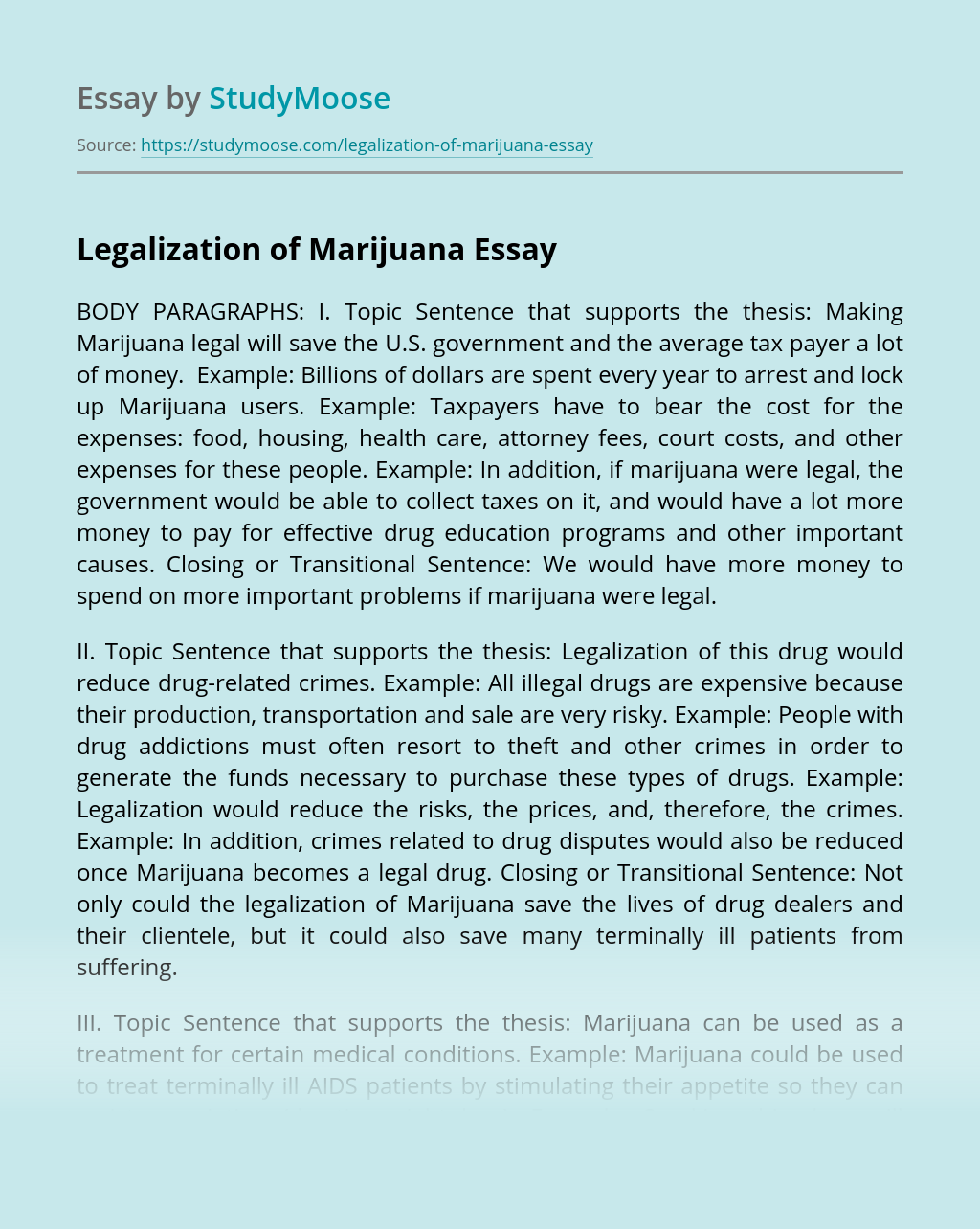 Maria is a spirited seventeen years old who lives in a small town in Colombia. She works for very low wages at a large industrial rose plantation. Maria comes from a family of four who desperately depend on her every paycheck just to get by in life. After so many years of working and struggling,...

Gang Representation in Sons of Anarchy

Sons of Anarchy is an American television drama created by Kurt Sutter that airs on FX network. The drama series, also known by its acronym SOA or SAMCRO, is centered around the culture of motorcycle gangs and includes multiple gangs with differentiated racial makeups. The series is set in current-day California in a fictional town...

Get Essay
Code of the Streets

Code of the Streets is a book embeded in a central city area in Philadelphia written by Elijah Anderson. The “code of the streets” integrated with regard, commitment, and honor is a system used to manage social interactions within the city. The individuals within the inner city are pushed into living by the code of...

Prescription drug abuse has had a strong hold on American society for decades and it does not appear to be diminishing. While some drugs have decreased in popularity over the years others have increased. For instance, there has been a surge in the popularity of Ecstasy and other “Club” drugs and an increase in marijuana...

Everybody knows that the real problem with illegal drugs is that they cost too much, and they are so difficult to get that drug addicts need to commit crimes in order to feed their habits. If only people could go down to the nearest Seven-Eleven and buy a cocaine slurpee, or drive up to the...