Traditional authority is legitimated by the sanctity of tradition. The ability and right to rule is passed down, often through heredity.

Don't use plagiarized sources. Get your custom essay on
“ Legal Rational Authority ”
Get custom paper
NEW! smart matching with writer

It does not change overtime, does not facilitate social change, tends to be irrational and inconsistent, and perpetuates the status quo. In fact, Weber states: “The creation of new law opposite traditional norms is deemed impossible in principle.” Traditional authority is typically embodied in feudalism or patrimonialism. In a purely patriarchal structure, “the servants are completely and personally dependent upon the lord”, while in an estate system (i.e. feudalism), “the servants are not personal servants of the lord but independent men” (Weber 1958, 4).

But, in both cases the system of authority does not change or evolve. Charismatic authority is found in a leader whose mission and vision inspire others.

It is based upon the perceived extraordinary characteristics of an individual. Weber saw a charismatic leader as the head of a new social movement, and one instilled with divine or supernatural powers, such as a religious prophet. Weber seemed to favor charismatic authority, and spent a good deal of time discussing it. In a study of charisma and religion, Riesebrodt argues that Weber also thought charisma played a strong – if not integral – role in traditional authority systems.

Thus, Weber’s favor for charismatic authority was particularly strong, especially in focusing on what happened to it with the death or decliAne of a charismatic leader. Charismatic authority is “routinized” in a number of ways according to Weber: orders are traditionalized, the staff or followers change into legal or “estate-like” (traditional) staff, or the meaning of charisma itself may undergo change.

Legal-rational authority is empowered by a formalistic belief in the content of the law (legal) or natural law (rationality). Obedience is not given to a specific individual leader – whether traditional or charismatic – but a set of uniform principles. Weber thought the best example of legal-rational authority was a bureaucracy (political or economic). This form of authority is frequently found in the modern state, city governments, private and public corporations, and various voluntary associations. In fact, Weber stated that the “development of the modern state is identical indeed with that of modern officialdom and bureaucratic organizations just as the development of modern capitalism is identical with the increasing bureaucratization of economic enterprise.

Weber’s theory of authority is very rich and intricate. Weber and others have detailed many interesting relationships and processes occurring between the types. Blau’s “Critical Remarks on Weber’s Theory of Authority” explains two of these in particular, components that either strengthen or weaken an authority type in regards to another. The three authority types may be re-enforced by traits that differentiate them from other types.

In charismatic authority Weber considers charisma to be a driving and creative force which surges through traditional authority and established rules. The sole basis of charismatic authority is the recognition or acceptance of the claims of the leader by the followers. While it is irrational, in that it is not calculable or systematic, it can be revolutionary, breaking traditional rule and can even challenge legal authority.

Legal-rational authority is a particular system containing humans, like e.g. organizations, there is some authority acting as a stabilizing factor making e.g. employees follow the directions of the leaders. Authority helps to prevent anarchy, and help to define a clear hierarchy of decision-making. A clear hierarchy will potentially lead to an effective organization, consisting of strong and legitimate authority relations between leaders and followers. This authority is only granted leaders if followers find his or her authority legitimate. This illustrates the fictitious believe that leaders automatically posses authority. Instead, leaders are given authority by their followers to e.g. inspire, control and command.

Particular authority types can lose their power to – and thus transition into – other types by some of the following ways. Revolutionary ideals can be advocated by a charismatic leader or the rational pursuit of ends via abstract formal principles can both weaken traditional authority. Revolutionary charismatic movements can be crystallized into a traditional order or bureaucratized into a rational formal organization. Finally, the irrational forces and powers of tradition In traditional authority, the legitimacy of the authority comes from tradition. Charismatic authority is legitimized by the personality and leadership qualities of the ruling individual. Finally, rational-legal authority derives its powers from the system of bureaucracy and legality. Legal rationality and legitimacy

Under rational-legal authority, legitimacy is seen as coming from a legal order and the laws that have been enacted in it. Weber defined legal order as a system where the rules are enacted and obeyed as legitimate because they are in line with other laws on how they can be enacted and how they should be obeyed. Further, they are enforced by a government that monopolizes their enactment and the legitimate use of physical force.

Weber states from another source that what distinguishes legal rational authority, from charismatic authority and traditional authority on the one hand and leadership, persuasion and influence on the other hand, is legitimacy. Superiors feel that they have a right to issue commands; subordinates perceive an obligation to obey. Social scientist agree that authority is but one of several resources available to incumbents in formal positions For example, a Head of State is dependent upon a similar nesting of authority. His legitimacy must be acknowledged, not just by citizens, but by those who control other valued resources: his immediate staff, his cabinet, military leaders and in the long run, the administration and political apparatus of the entire society. Emergence of the modern state

3.organization of an officialdom, dependent upon the central authority Weber argued that some of those attributes have existed in various time or places, but together they existed only in Occidental civilization. The conditions that favored this were emergence of rational-legal rationality (various status groups in the Occident promoted that emergence) emergence of modern officialdom (bureaucracy), which required 1.development of the money economy, where officials are compensated in money instead of kind (usually land grants) 2.quantitative and qualitative expansion of administrative tasks 3.centralisation and increased efficiency of administration.

According to Max Weber, a modern state exists where a political community has: * an administrative and legal order that has been created and can be changed by legislation that also determines its role * binding authority over citizens and actions in its jurisdiction * the right to legitimately use the physical force in its jurisdiction An important attribute of Weber’s definition of a modern state was that it is a bureaucracy. The vast majority of the modern states from the 20th century onward fall under the rational-legal authority category

Bureaucracy is “the existence of a specialized administrative staff”. According to Weber, beaucracy is a particular type of administrative structure developed through rational-legal authority. Weber noted that bureaucracy resolves some of the shortcomings of the traditional system. His view view of bureaucracy was a system of power where leaders exercise control over others — a system based on discipline. Weber stressed that the rational-legal form was the most stable of systems for both superiors and subordinates — it’s more reliable and clear, yet allows the subordinate more independence and discretion. Subordinates ideally can challenge the decisions of their leaders by referring to the stated rules — charisma becomes less important. As a result, bureaucratic systems can handle more complex operations than traditional system.

Another source reveals that legal-rational authority brings about the development of a rational legal system, there is likely to be a political system which becomes rationalized in a similar way. Associated with this are constitutions, written documents, established offices, regularized modes of representation, regular elections and political procedures. These are developed in opposition to earlier systems such as monarchies or other traditional forms, where there are no well developed set of rules. As a political or legal system develops in this rational manner, authority takes on a legal form. Those who govern or rule either have, or appear to have, a legitimate legal right to do so. Those who are subordinate within this system accept the legality of the rulers, believing they have the legitimate right to exercise power. Those with power then exercise power based on this right of legitimacy. 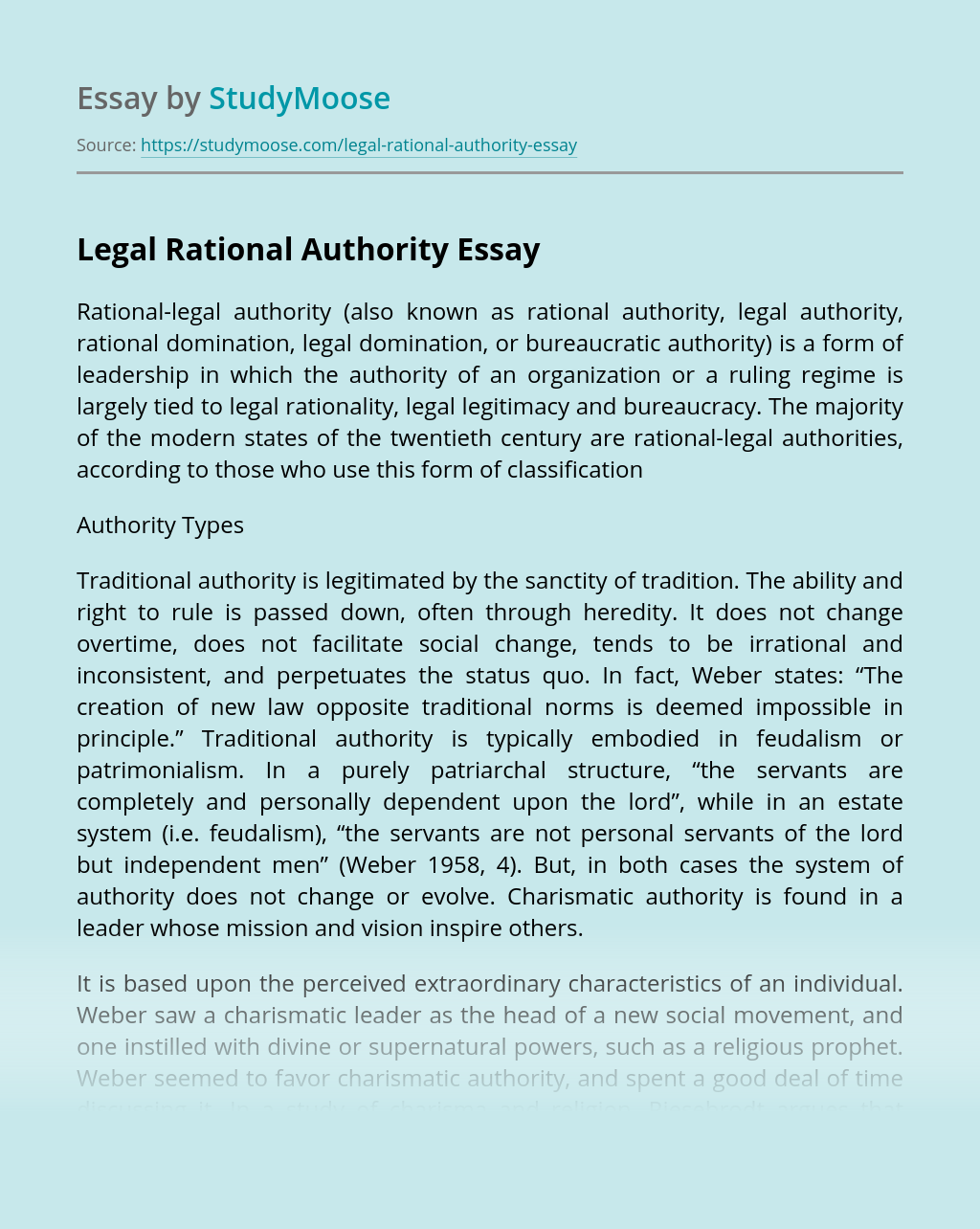