If you break the statutory law it is a crime.

* A law passed by parliament. A new government can bring in new laws – this means that if there is a new government they have the rights to allow a law to pass or can turn down it, but it has to be decided through the parliament. * This involves the police, if the rule is broken – this is saying that if you break the legislation the police have the right to enter and do something about it.

Don't use plagiarized sources.
Get Your Custom Essay on Legal Factors in Sport Just from $13,9/Page

The civil law is a private prosecutor and does not involve the police to take action.

This law is to do nothing with the statutory law as they are separate.

* Private prosecution which does not involve the police – this means that they can prosecute you without the police getting involved. * You can seek compensation for damages caused by others – this means that you can be prosecuted for damages you have done to them. * Someone not found guilty under statutory law have civil action taken against them – this shows that even if you are not guilty in statutory law, you can be guilty in civil law. An example is when Steven Gerrard didn’t get arrested, but the DJ got compensation on him because of all of the damage Steven and his friends did to him.

* This is a law developed through decisions made by judges – this shows that anyone cannot decide only judges can. * This can become a precedent for later cases and can become binding on judges. An example is when two men Russell Jones & Walker acted behalf on a client who was injured by kicking and punching bag which had not been rolled regularly, as is required to ensure an even distribution of the filling. When he kicked it, he struck a hard patch, causing him to sustain an injury. This led to prosecution and found the two men guilty.

* This means you are acting in the place of parents, e.g. taking a group on a visit – this means that you are responsible for the child, as they have signed a consent form, but if they haven’t and you took them you can be prosecuted if they got hurt. An example would be if 17 year old kid plays with a 14 year old kid and that 14 year old kid gets hurt it’ll be the coach’s fault for letting the kid play with older footballers.

* This applies to staff managers and event organisers.
* You must take all reasonable action to prevent accidents occurring to people in your care. An example would be if the event organiser chose a place where it has bad conditions and the area isn’t acceptable for people to enter. If those people went and someone got injured it will be the event organisers fault as he chose an unacceptable place.

* This is based on the principle of reason and common sense. * The person in charge must provide reasonable standard of care – if you are taking care of them you must give them acceptable care so they are safe. An example would be if you didn’t take care of that person and didn’t tell them anything, this would be negligence because you are not taking care of them appropriately and if they get injured it is all your fault.

Health and safety executives are the main body to oversee the health and safety in the UK. * Inspects facility – they should inspect the place and equipment before letting them know if it is safe or not. * Investigation fatal or serious injuries or ill health – they should investigate whose fault it is and what caused the injury or illness. * Gives advice on safety – they should give them advice on what is safety and how to conduct if anything is safe. * Carries out prosecutions – they should be able to carry out a prosecution if the area isn’t safe and they got injured. An example would be if your facility is unacceptable to use and you let that person use it, if they get injured it is all your fault and your facility will be inspected by the HSE. Local Authorities:

This is a department within the local authorities, which monitor and enforce standards of health and safety, e.g. environmental health. An example would be in a hockey match and the environment isn’t safe for example rubbish everywhere or it is foggy, this will lead to injuries because the environment isn’t clean or the area isn’t see able for the players to play.

* Part of the local authorities – they are the authority that looks into schools and their education. * Responsible for all state schools in the region, e.g. Sandwell Local Education Authorities – they should check before making that area safe or they will get the blame if it isn’t. * Funding school places and employment of teachers – they should fund schools so they can improve the area and employ teachers that know what they are doing so the kids are safe. * Many schools have duel use facilities – they should be funded so that the schools can use a facility out of school. An example is when a Wakefield pupil was hit in the eye with a safe foam javelin and another one is in North Lincolnshire where a student was injured after falling off an exercise bike.

* Enforce laws which are passed by parliament.
* Laws may change according to the government of the day.
* Issue cautions, fixed penalties and arrest people.
An example is when the police were out of control and couldn’t communicate with each other in the Hillsborough disaster. This lead to people’s death and injuries.

* Work with local authorities to promote community schemes – this means that they are responsible to teach the kids about fire safety. * Visit schools to educate children about the dangers of playing with fire. An example is the Bradford fire when one spectator throws a cigarette under the stand where there was lots of rubbish, this lead to a fire causing the stadium to burn down and people dying.

An example is when Robin Van Persie elbowed a Newcastle player Yohan Cabaye in the eyes and got away with it, the FA saw nothing wrong with it so they did nothing about it. 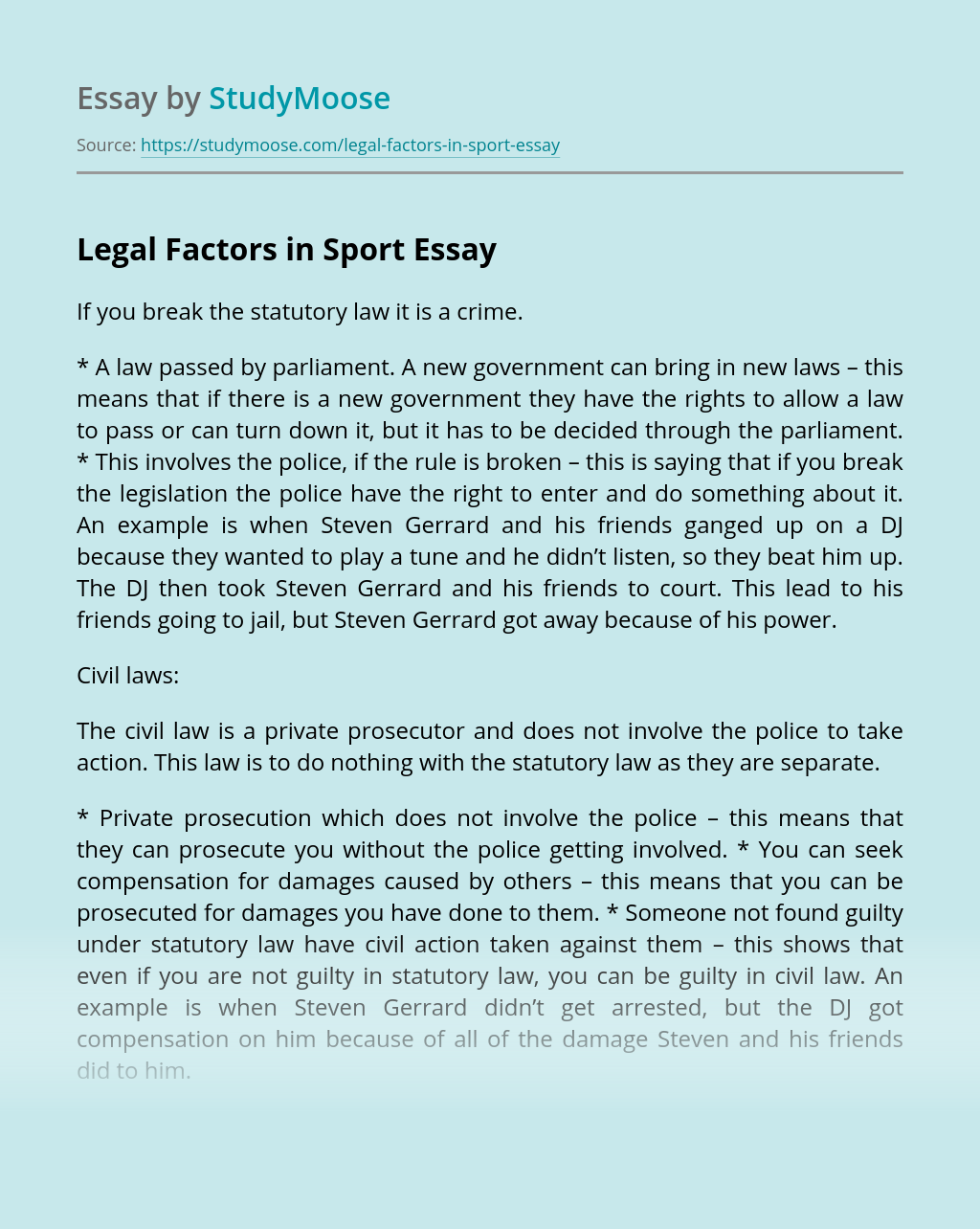 A) The analytical framework I have chosen to use is PEST. Pest stands for Political, Economic, Social and Technological and are all factors of a PEST analysis. These are intellectual tools which are created in order to help a researcher to collect, sort, prioritise and interpret a variety of existing data and information about the...

From professional sports to children’s toys, women are portrayed as the weaker sex. The media and pop culture has allowed this to happen. Women are shown as dumb, beautiful, and totally dependent. Although women are shown like this, most women in the real world are intelligent, nice, independent, and not as beautiful as a supermodel....

Write a 200- to 300-word response to the following questions based on “Superhero in the Cubicle” in the Electronic Reserve Readings: Q: What technological advancements in communication were discussed in the article? The technological communication advancements discussed in the article, ‘Superhero in the Cubicle’, were IBM Lotus Connections by Big Blue, Smartsheet from Smartsheet.com, Web...