Throughout the history of humankind, there have always been people in power and people oppressed by those in power. Race and gender are often the lines oppression is based upon; however, there have always been individuals who have fought against this harsh reality. In Kindred, by Octavia Butler, the author uses the science fiction genre to allow Dana to break the barrier of time in order to learn about the oppression of black women in society; Butler expresses that the only way to combat racism and sexism in the present is to re-examine and learn from the past.

Don't use plagiarized sources. Get your custom essay on
“ Learning from History in Order to Combat Oppression in Kindred by Octavia Butler ”
Get custom paper
NEW! smart matching with writer

Butler uses Dana’s time travel in order to represent oppression in society. Dana does not really comprehend the way she travels to the past or how to control it, “I don’t have any control at all,”(Butler 49); this is similar to the amount she knows about the oppression of black women in society- she does not fully understand all aspects of it.

As the story continues, she gains more control of the travel, and she gains more understanding of the historical wounds of her people by being able to examine it first hand. “Her husband dead, three children sold, the fourth defective, and her having to thank God for the defect,”(76). Dana procures empathy for the emotions black women felt- the quiet anger they had to stop themselves from letting out. Butler communicates to the readers the hardship black women endured in society through the lens of Dana’s modern point of view.

This comparison between past and present point of view allows readers to put themselves in the shoes of Dana, who is taking part in past subjugation which allows readers to gain more empathy for black women in the 19th century. At the end of the book, Butler writes that Dana stops the travel by killing it- she kills Rufus, “‘And now that the boy is dead,’”(264). By gaining information and learning about her time travel more and more, Dana discovers how to end it- by fighting it. Butler develops Dana’s knowledge of her time travel throughout the story while developing the readers’ knowledge of oppression in order to tell readers the way to stop this subjugation is to fight it with the information one learns.

By seeing the evolution of racism and sexism over time, one can better understand how to fight it. Racism and sexism are learned behaviors that have been taught to children throughout the history of America; they have been built into our institutions, our governments, our schools, and so they have been built into our history and they have been ingrained into our minds. This evolution can be seen through Rufus’ process of maturity. Butler allows the readers to see the ideas of racism and sexism grow within Rufus with Dana’s time travel Since Dana shows up at various points during his developmental stages in life, she can see how his mind is shaping and changing during his life. During Dana’s first encounter, Rufus says “‘Alice is my friend’” (Butler 28). Alice is a free black girl who lives nearby; by using the word “friend” it shows that the young Rufus has the ability to see black girls as equal beings. As Rufus grows older, he becomes more alike to the men in the society he lives in– racist and sexist. Rufus assimilates to societal norms; he sees women and black people as property. “‘Rufe did you manage to rape that girl?’…..’ When we were little, we were friends,’ he said softly. ‘We grew up. She got so she’d rather have a buck n***** than me!’” (123). He used Alice as if she were his property, even though at the time she wasn’t. This shows that Rufus grew into his racism and sexism; he had the opportunity to learn to be kind to black women but instead, he grew up learning the ways of society, “The boy learned to talk that way from his mother. And from his father,” (61). He learned that white males are at the top of the food chain and that means they can treat anyone else however they like. In this way, Butler communicates to the readers that maybe, if society and parents taught and acted upon love and caring for other human beings instead of hatred based on stereotypes, then oppression would be a thing of the past.

Dana struggles between forgiving and accepting what Rufus does versus hating him for acts of cruelty he commits which communicates the struggle in life of whether to accept one’s circumstances as they are, or to fight for the rights a person deserves. This struggle shows how Dana is learning by walking in the shoes of her ancestors. Butler communicates to readers that in the past, women had to accept the life they had in order to protect their families and themselves, “She [Tess] had done the safe thing– had accepted a life of slavery because she was afraid” (Butler 145). This struggle is the same that Dana has, she knows Rufus is her ancestor so she has to accept whatever this world dashes out at her in order to save her own life- she, like Tess, has to accept slavery to keep herself safe. This shows how sometimes women don’t have an option to fight against oppression, there is often too much at risk. Dana, however, sees herself as “moral[ly] superior” (145). She sees herself as able to fight against slavery more than Tess because she is just an actor in this time. Dana has grown up in a time when African Americans have been free from slavery for a hundred years and when women’s rights were blossoming each day. She sees hope for the future, hope for fighting against oppression. Butler gives the readers a lens to see that oppression can end, step by step; by going back in time and seeing what people had to deal with and how far the road has been paved away from oppression, the future can seem a lot brighter. Dana realizes at the end of the story that the only way to end her subjugation is to fight it. Dana’s time-traveling gives readers the tools to fight against oppression- education.

Education is the keystone for freedom. Butler alludes that she is giving her readers the tools to fight oppression by educating them through Dana educating the slaves on the property. “One of the reasons it was against the law in some states to teach slaves to read and write was that they might escape by writing themselves passes” (Butler 49). Education has always been something the people in power are afraid of the subjects receiving. If people arm themselves with history, literature, and science, then they may be able to cook up with their own ideas about leading and about society., “Weylin stood squarely in front of the door. “Didn’t I tell you I didn’t want you reading!’… I never saw where the whip came from…”(107). Weylin’s anger at finding Dana’s reading shows how whites used the idea of Social Darwinism to suggest that black people should be subjugated and the idea that they could become educated scared them. Arming yourself with intellect means you can get a lot further. Butler is indirectly showing her readers that by reading this book and educating themselves about the historic oppression women and African Americans have faced in society, they can arm themselves with the tools to fight this oppression in the present. The more information you have, the better off you are when it comes down to it. Dana educates the children so that one day they may use it to be free from the servitude that is eminent in their life; she does not care about the trouble she may face because she knows how important it is, “The boy wants to learn, and I’m going to teach him,” (101). In the same way, Butler educates her readers so that one day they may use the tools she gives to be free from whatever oppression they face.

Although there have always been people oppressed throughout history, there are always people who are willing to rise up against the suppression of their people. American slavery may be over now, but it should never be forgotten; there are historical wounds that must be brought up so we can learn from them in order to create a better future. In Kindred, By Octavia Butler, the author takes readers on a trip to a time where freedom existed for only a few, allowing for an understanding that we must dig up and excavate the past in order to understand how to free ourselves in the present.

Learning from History in Order to Combat Oppression in Kindred by Octavia Butler. (2021, Mar 02). Retrieved from https://studymoose.com/learning-from-history-in-order-to-combat-oppression-in-kindred-by-octavia-butler-essay 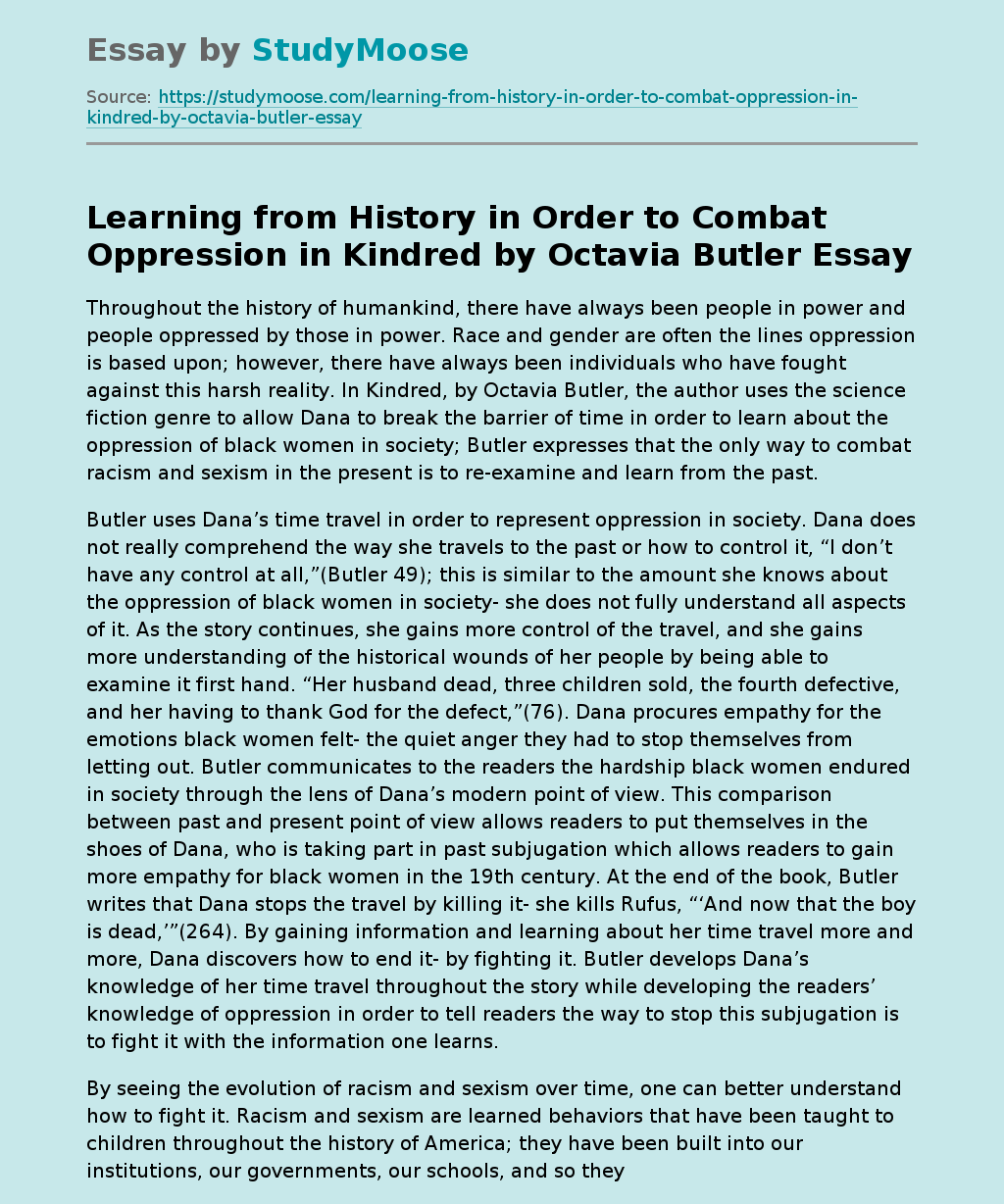