Introduction: Hook- “Alas, Siddhartha, I see you suffering, but you’re suffering a pain at which one would like to laugh, at which you’ll soon laugh for yourself. ” Introduction to Subject- Imagine if suffering and pleasure worked together as one. This is something Siddhartha discovers from his long quest to enlightenment. Introduction to topics- Topic 1: Siddhartha struggles with the need to love. In order for his quest to come to a conclusion, he must to learn how to love, not only himself, but also the world.

Topic 2: Siddhartha states, “I can think, I can wait, I can fast.

“. To reach all goals you need patience. You need time. Although, Siddhartha soon discovers that time is merely an illusion. Topic 3: Om. Yes, a simple word, but its significance to Siddhartha is intricate, yet profound, and plays a crucial role in his journey to enlightenment. Thesis- These three main things are of great value to Siddhartha. Time, Love and the word om are highly influential in his path to enlightenment.

Paragraph/Topic #1: Topic Sentence: For Siddhartha to achieve enlightenment, he needed to learn the art of love.

He did not know how to love, almost incapable. It was this realization that drove him to learn that art, and to master it. Example 1: The first occurrence is a love between he and his father, a love that he rejects. Example 2: When he travels into town, he meets a beautiful woman named Kamala, where he then learns the art of lovemaking. Though, Siddhartha gets trapped in Samsara and escapes it by leaving her, although he leaves her pregnant and later it’s his son that truly invokes Siddhartha’s love.

Example 3: It is the help of his friend the ferryman, Vasudeva, which helps him, not only reach enlightenment but also the ability and power to love. It is the river that they have crossed so many times that speaks to them, and through it all he learns to love, to love everything in the world. To embrace the flaws and know that in its own way, the world is perfect. Transitional Statement: Love can be tricky and challenging. Siddhartha needed to discover and explore it in order to know the profound meaning of love, and that discovery had to take time.

Paragraph/Topic #2: Topic Sentence: What is time? What does it even represent? Siddhartha believes that time is nothing more than an illusion, that life itself is infinite. Example 1: Siddhartha gets trapped in Samsara when he goes to find love. The feeling is infinite, just like his belief in life, and that whole idea of the circle of life is emphasized. Example 2: The River in the book represents life itself. It wasn’t until the end of the book that Siddhartha could hear the river laugh, that is where he discovers the true reality of time.

Example 3: His old friend Govinda visits Siddhartha on his ferry. Govinda then asks that Siddhartha tell him what his own doctrine is. What he has discovered. Siddhartha brings up the whole concept of time. He states that “time is not real” that “the span that seems to exist between world and eternity, between sorrow and bliss, between evil and good, is all an illusion. ” (pg. 76) Transitional Statement: Understanding time, and the past and the future, is just one of the many important things Siddhartha will have to discover on his road to enlightenment.

Paragraph/Topic #3 Topic Sentence: “om, is the absolute” (pg. 73) and in truth, Siddhartha is saved many times by the simple, two letter word, om. Example 1: The word om according to Carl Jung. Is the verbal embodiment of the collective unconscious. om is everything to Siddhartha and represents the world and oneness. This first occurred when he was a little boy meditating to decide if he should leave his home. Example 2: After he had left Kamala and his wealth behind, he struggled to escape samsara. It was that word that saved him when he was on the brink of suicide.

Example 3: At the end, when he is meditating by the river, he finally recognizes the absolution of the word om, this is where he ultimately achieves enlightenment. Transitional Statement: Siddhartha eventually realized that the word om represents all oneness and the world. Many times he was awakened to life by this one simple word. Conclusion: Revised Thesis Statement: Siddhartha ultimately achieves enlightenment, but he wouldn’t have been able to attain his goals without exploring the concepts of time, love and om. Review of 3 Topics:

Topic 1: To reach enlightenment, he learned that time, is merely an illusion, that it is infinite. Topic 2: Siddhartha also achieved love for the world, that it is flawless and perfect just the way it is. Topic 3: It was the word om that protected and saved him so many times and it was this simple word that had a significant impact not only of himself but also his journey to enlightenment. Mint: So I give you a challenge, next time you’re out in nature, and you come across a river, try to sit and listen. Just see what it tells you. 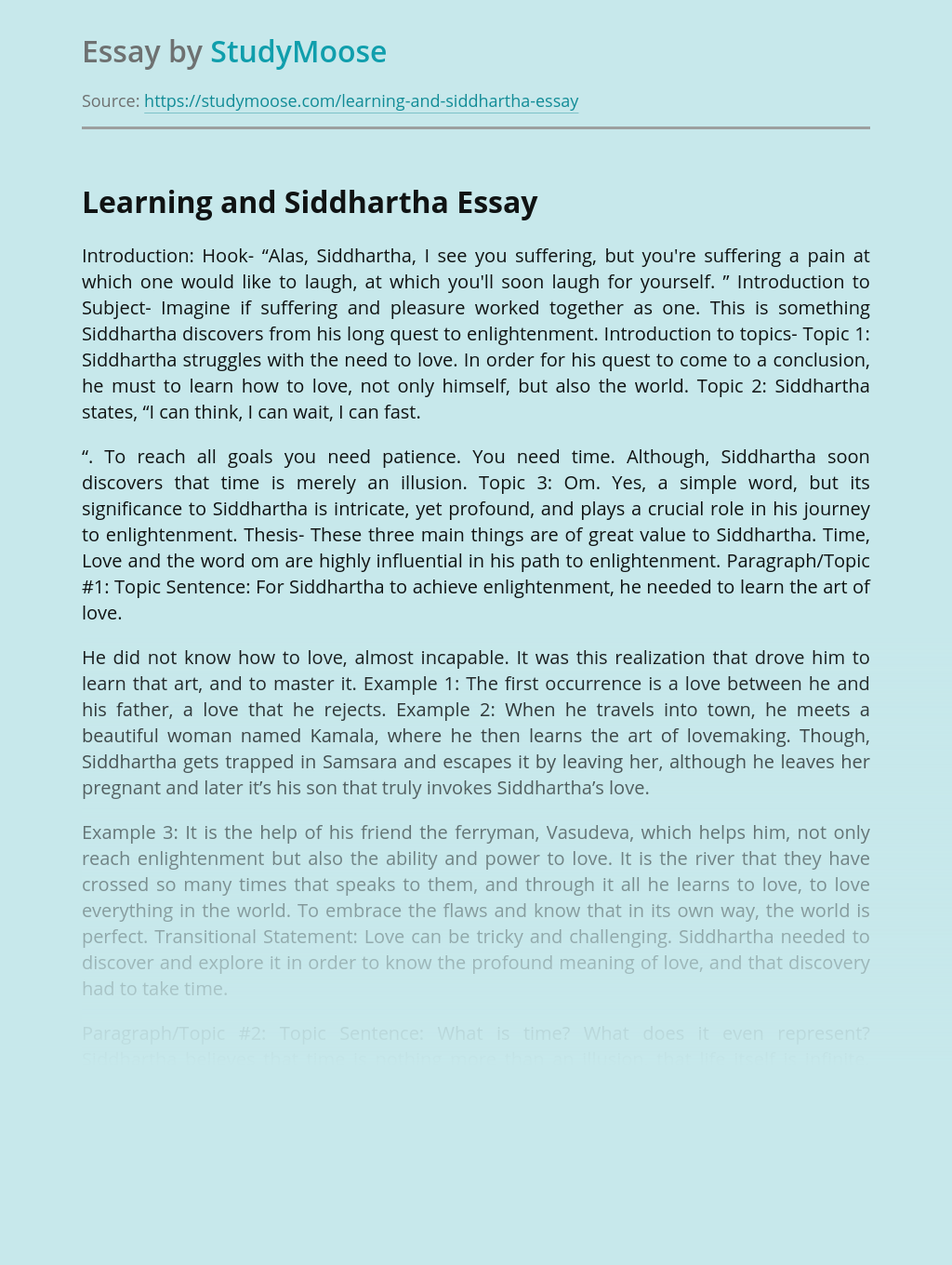 Don’t waste time
Get a verified expert to help you with Learning and Siddhartha
Hire verified expert
$35.80 for a 2-page paper
Stay Safe, Stay Original