Learning and Being Educated

Education has become an important part of everyday life as means to teach knowledge and get students for their life after school out in the “Real world”. And yet, a question that has brought a ton of controversy is “what does it mean to be Educated and who decides”. Is it right to claim that today’s education system has been influenced by teachers and a series of hand selected published textbooks. Today’s education system has been reduced to teachers assume the position of holders of knowledge and who are supposed to then transfers said knowledge to students.

Don't use plagiarized sources. Get your custom essay on
“ Learning and Being Educated ”
Get custom paper
NEW! smart matching with writer

Paul Friere (1993) in his article “the banking concept of education” has demonstrated this aspect in the current education system. Students are made submissive and are supposed to accept without question everything that is thrown at them by their teacher. Friere describe the current education system as a bank deposit where the teacher is the depositor and the students the depositories.

The modern day educational system forgets that perhaps the teacher can learn anything from the student.

Today’s educational system is also influenced by a series of textbook/study books that are brought into the system purely because of the syllabus. These textbooks determine what the students should learn about the particular topic and the students have no right to question the book or books. James Loewen (1996) in his article “Everything your American Textbook got wrong” describes how history textbooks have influenced the understanding and perception of the history subject among the American students.

How information is presented in the textbook will then also determine what the student is learning and the perception of said students toward that particular subject. Loewen favourite subject to oint out is the history books, they are wide and boring and do not include suspense or other interesting styles of writing entertaining to student or other person. Teacher and textbooks are under the education system to serve facts to the students on a silver platter which students are supposed to then memorize in return. The system does not give students the opportunity to think or to make their own opinion on any matter. Friere describes the current system of education as one that turns students into adaptors of situations rather than transformers.

Sometime the information taught by teachers or the textbook are misleading and due to the system the students take in the information as is presented to them without questioning it. Loewen describe the History field as one that has been totally dominated by textbook which most of them are derived from one another and not from primary sources. The history books tend to present optimism and overlook failures in the American history. History is written by the victor, and Americans are not always the victor and yet we have a huge variety of history books. So we overlook the fact that we may have failed in something.

A perfect education system would encouraged creativity and critical thinking among students and not turn students into mere containers of information. Students are supposed to be able to link what they are taught in a class room to reality so that they make the connection and it is more personal. The process of teachingt should also be mutual where knowledge can flow from teachers to students and vise versa and where the student is allowed to criticize textbooks. According to Friere a perfect education system should involve authentic thinking that is placed in the context of reality and should be based on true means of communication between the teacher and the students.

Mark Twain once said, “I have never let my schooling interfere with my education.” This does not deny that one can learn in school, by teachers, or textbook but what one learns in school may not always be the truth. A student must be critical of standardized textbooks, and current academic doctrine. Through either malicious intent or accident of overreaching, textbooks (and history books in particular) are fraught with inaccuracies, misrepresentation, omissions, or an inadequate method of learning to gain truths and critical thinking. They don’t ever want America to look bad, which is understandable but at the same time they need to be honest and let the student decide for their own.

This is how students learn. Loewen basically criticizes current history books (whether they are American or other) for containing inaccurate illustrations of historical events. An example is Christopher Columbus and the discrepancies in many historical textbooks with the interactions between the Europeans, the European settlers and the Native Americans. Often deceptive and inaccurate teachings told about America’s commerce in slavery. Loewen continues to criticize the texts for a tendency to avoid controversy and for their non-engaging style. He states that when historical textbooks talk about historical figures to the status of supermen/superwomen, they unintentionally give students the impression that these personas are mythical figures that lived in the past.

Another example is the history-as-myth method which teaches students that history’s greatest days are past and do not relate to the current era. The educator and learner should come together as one and each learn from one another, without a positional power bias. In the problem-posing method both the educator and learner are students who should be attentive, active and thinking for themselves. Therefore problem posing education allows the students to develop their critical thinking because of the communication there is between the teacher and student. Broadminded education makes students question their consciousness and preparing them for a challenge life outside of academia. If textbooks could be open for interpretation and more interacting text then I believe that we could avoid the term “Boring” in history class. From there teachers need to be more approachable plus open to question and answer time as this is how most students learn.

Learning and Being Educated. (2017, Jan 02). Retrieved from http://studymoose.com/learning-and-being-educated-essay 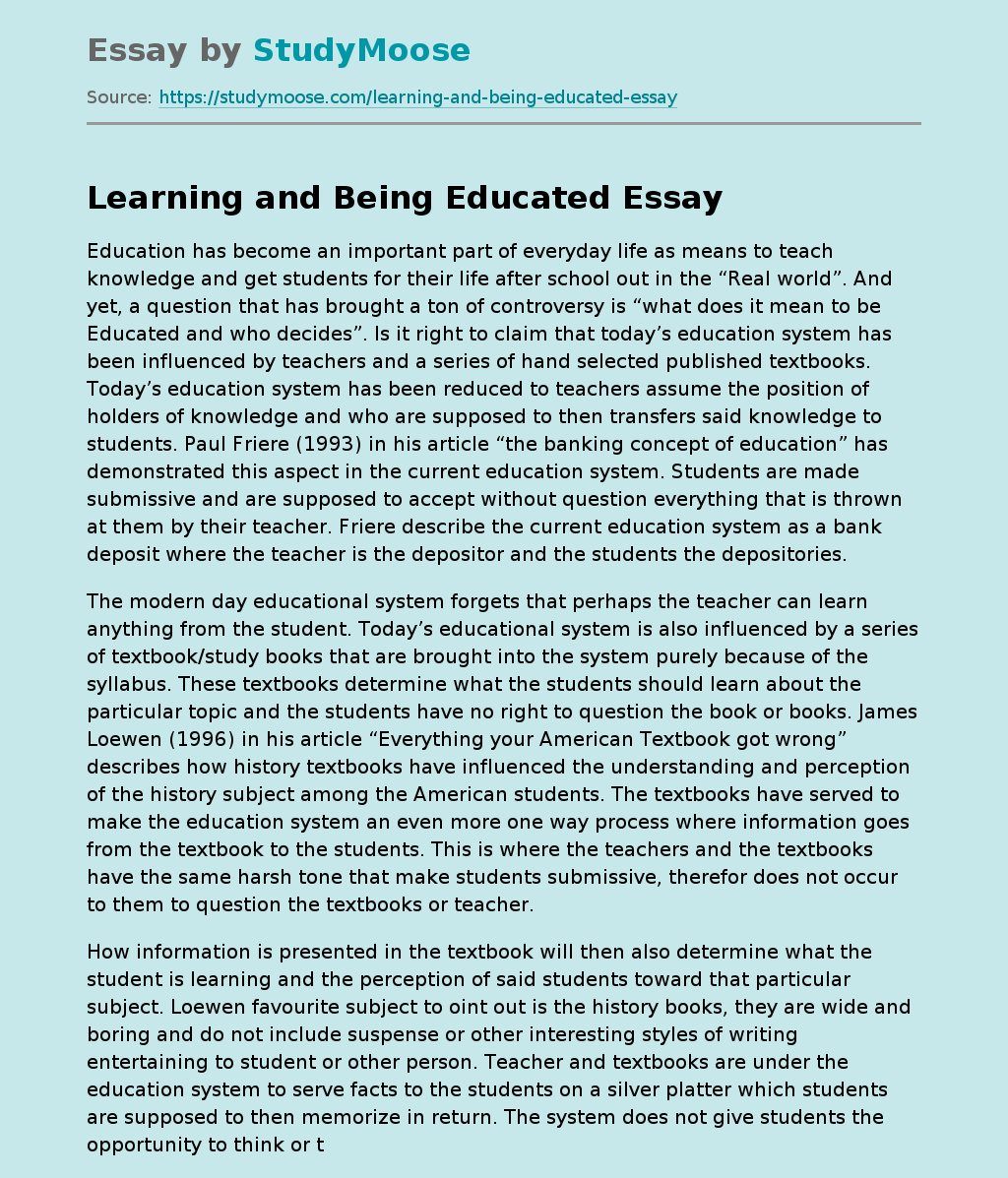