Well, yes, there is some work involved in learning Spanish, but there is a lot of fun too! For example, if you enjoy humor in English, when you learn Spanish you will be able to enjoy three kinds of humor: in English, in Spanish, and in “Spanglish”!

Spanglish is a crossover combination of the two languages, often using a play on words in one language to come up with improbable funny translations in the other. To understand any of it you have to first understand both Spanish and English.

Don't use plagiarized sources. Get your custom essay on
“ Learn Spanish and Open Up a Whole New World of Spanish Humor ”
Get custom paper
NEW! smart matching with writer

Spanish humor is found in a wide range of forms. For much of it, in order to understand what is being said you would need to know popular slang expressions, which vary from country to country.

Most of it is not easily translated or maybe is not translatable at all. About 80% of the jokes you hear in Spanish cannot be translated in a way that the humor gets through. The same way with English. For example the Abbot and Costello routine of, “Who’s on first?” just won’t translate! You could make up a similar story in Spanish that would go over O.K., but “Who’s on first?” depends on a play on words that is peculiar to English.

Did you happen to see the movie, “Born in East L.A.?” It was funny in English and hilarious if you understood the Spanish too. It is almost worth it to learn Spanish just to watch that movie over again and understand what was really being said!

There are great Spanish humorists and actor (more than just Cantinflas!) to be heard, understood and appreciated.

There are also some great humor programs on Spanish radio and TV in the U.S. You will hear Spanglish and English in addition to the Spanish. The result is a rich cultural mixture of languages and customs, the way people respond and hilarious humor. And you need to speak Spanish to understand it!

So you see, there is a lot of fun and funny things out there in the World, that you are missing (they go right over your head) unless you speak some Spanish!

Learn Spanish and Open Up a Whole New World of Spanish Humor. (2020, Jun 02). Retrieved from http://studymoose.com/learn-spanish-and-open-up-a-whole-new-world-of-spanish-humor-24970-new-essay 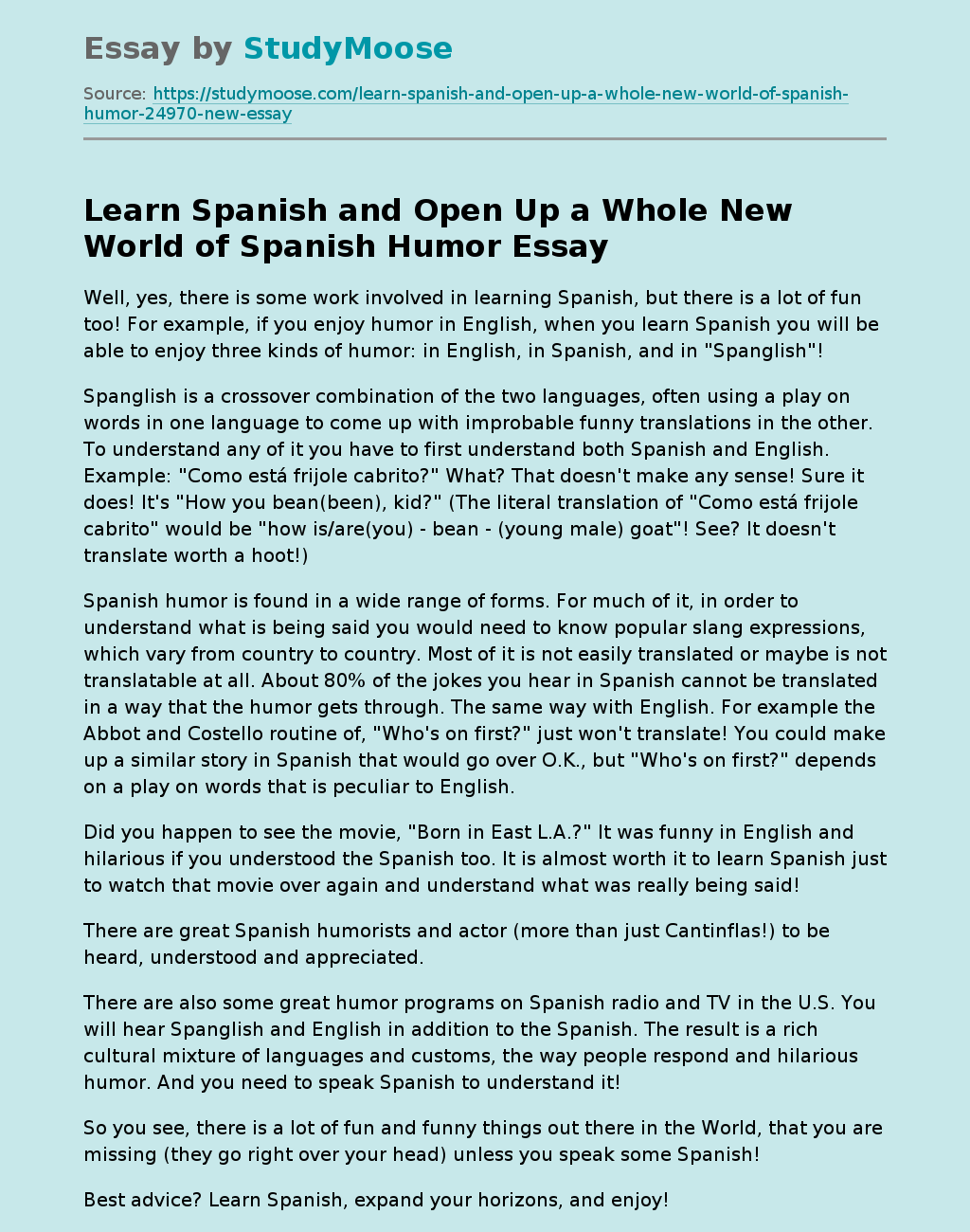