What do we learn about Ralph, Piggy and Jack in the First chapter of Lord of the Flies?

When ‘the fat boy’ asks Ralph, ‘Aren’t there any grown-ups at all?’ Ralph replies ‘I don’t think so.’ He says this ‘solemnly’ at first ‘but then the delight of a realized ambition came over him.

Don't use plagiarized sources. Get your custom essay on
“ What do we learn about Ralph, Piggy and Jack in the First chapter of Lord of the Flies? ”
Get custom paper
NEW! smart matching with writer

’ This shows that Ralph is going to love it on the island. As ‘the fat boy’ asks ‘what’s your name’ he replies ‘Ralph’ and then he ‘increases his speed’ showing us that he doesn’t really want to be seen with a ‘fat boy.’ More evidence of this is where ‘the fat boy’ runs off because of ‘them fruit’ he has eaten and Ralph again tries to escape ‘the fat boy.’

A little while later the two boys find a lagoon.

Ralph here becomes conscious ‘of the weight of his clothes, kicked his shoes off fiercely and ripped off each stocking with its elastic garter in a single movement.’ This is representing the Garden of Eden as Ralph feels comfortable about being naked. This shows the athleticism of Ralph, at only ‘twelve years and a few months’ he had ‘lost the prominent tummy of childhood.’ And Ralph is able to show off his ‘golden body.’

When the two boys find the pool Ralph jumps into the water and piggy looks amazed, he then tells Ralph that he ‘can’t half swim.

’ Ralph then replies that he could swim when he ‘was five’ and that his ‘daddy’ taught him, who happens to be ‘a commander in the Navy.’ This shows that Ralph probably came from a well brought up middle class family. As piggy and Ralph are in the pool, Ralph finds a conch shell and admires its beauty and acts like it is a toy. Ralph tries to blow on the conch but makes a ‘farting noise.’ Both piggy and Ralph laugh at this reminding you that these boys are still children and have not matured yet so anything could happen. He is the told how to blow on the shell and does so. Ralph also seems to do a very odd thing, every time he is exited or pleased about something he seems to stand on his head. This may be symbolising that everything is going to be turned upside down.

As Jack is introduced he seems to have a lot of power which Ralph seems to admire.

As they have a vote for chief Ralph is seen to be very popular with everybody except for piggy as piggy trusted his to keep his name a secret but he betrays his trust showing that he may not be a very nice person after all.

After the election Ralph admires Jack as his ‘grey shorts were sticking to him with sweat,’ and that he had ‘tried to get over that hill to see if there was water all round.’ Ralph admires this as Jack has already been off exploring the island but he has been stuck with piggy all the time. He also admires the fact that Jack can keep these sweaty shorts on even in these tropical temperatures.

Although Ralph has shown to be a popular leader he does show some weakness. As he beats Jack he feels the need to give him a consolation prize and tells him that the ‘choir belongs to you, of course,’ showing that if he beats a lot of people he may feel the need to give something to the loser.

Piggy is an overweight boy who wears thick round glasses and has asthma which he seems to be proud of as he is the ‘only one in his class’ with it showing he is proud to be different. Piggy shows that he has had a poor upbringing with his grammar. He has a cockney accent when he says things like ‘all them other kids.’

When Piggy and Ralph are talking about their upbringing in the pool Piggy tells us that his ‘dad’s dead’ and ‘his mum.’ He also tells us that his ‘auntie’ has brought him up whom he keeps referring to. His ‘auntie’ ‘owns a sweet shop’ showing us that Piggy probably gets home from school every night and stuffs himself with sweets.

As Ralph and Piggy are sitting down talking Piggy shows that he is venerable as he has only just met Ralph and yet he is already trusting him with a secret that his class ‘used to call me piggy.’ Although later on Ralph betrays his trust and tells everyone that his name is Piggy so he is very reluctant towards voting Ralph for chief.

As Ralph and Piggy are in the pool Ralph finds the conch shell. Ralph wants to play with it but piggy lectures Ralph about how ‘it’s ever so valuable.’ He explains that ‘if you wanted to buy one you’d have to pay pounds and pounds.’ This shows that Piggy is probably quite a bright boy but because of his upbringing he can’t show his full potential. He also shows quite a scientific approach everything. Although Piggy feels okay to give any credit for his thoughts to people he admires or looks up to. This is shown where Ralph finds the conch and blows it for his own amusement, but Piggy ‘beamed at Ralph’ and said with a lot of excitement ‘ That was what you meant, didn’t you? That’s why you got the conch out of the water.’ Although this was actually what piggy was thinking he is still happy to give the credit to Ralph.

As all the children start to turn up Piggy again shows his logical thinking when he starts to find out what everybody’s name is although he gets some twins names muddled up and the ‘crowd laughed.’

At this point Jack is introduced. Piggy shows that he is ‘intimidated by this uniformed superiority and the offhand authority in Merridew’s voice.’ Because of this ‘Piggy asked no names.’

As Piggy builds up the courage to talk to Jack, Jack shows his personality by replying with ‘shut up fatty you’re talking too much.’ It is here that Ralph cried ‘his real name’s Piggy.’ Piggy then lost a lot of respect for Jack, ‘he went very pink, bowed his head and cleaned his glasses.’ Piggy seems to clean his glasses when he gets upset showing that he may be trying to hide tears so he doesn’t show a weakness to the group.

Jack is introduced as ‘the boy who controlled them.’ He seems to be the leader of a choir from the ‘black cloaks’ they are wearing and a ‘hambone frill’ around each of their necks.

Jack seems to be a very bossy character when he orders the choir to ‘stand still’ and ‘sit down, let him alone.’ Ralph already admires Jack as he has already explored the island, this is good for Jack as Ralph is popular, therefore if they become friends then Jack will have more power.

When it comes to voting for a leader Jack automatically thinks that he will be chosen as he was ‘chapter chorister and head boy,’ at his old school and he could ‘sing C sharp.’ Although when Jack loses the vote he is mortified and blushes because of it. But as Ralph looks up to Jack he still gives him the choir to lead. Jack then jumps up to argue with Ralph but he reconsiders as everybody would be on Ralph’s side. Jack has ‘red’ hair, which suggests a fiery nature and a short temper.

On the mountain ‘they heard the noises-squeakings.’ This is ‘a piglet caught in a curtain of creepers.’ Here ‘Jack drew his knife with a flourish. He raised his arm in the air. There came a pause, a hiatus.’ Jack shows second thoughts about killing a live animal but as soon as the other two boys witness this he becomes embarrassed and so ‘next time there will be no mercy’ showing that Jack would rather kill than lose power.

On numerous occasions Jack demonstrates his power and strength by whipping his knife from his sheath and ‘slam’s and clouts’ a knife into a tree almost to show what he would do to anyone who challenged him. He again shows his power when the three boys come up to ‘candle bushes’ and he ‘slashed at one with his knife.’ This also illustrates that he is a violent boy.

The boys end up on the island because of a plane crash. There would have been no way of knowing that the plane was going to be hit therefore there would be no need to carry a knife although Jack still carries one at all times showing his propensity to violence. When you realize this then you wonder why the adults at his old school made him ‘head boy’ and ‘head chorister’. This may have been because he could put on a performance. Therefore he could be lying to anybody and they wouldn’t know.

Jack also demonstrates his endurance and discipline when he keeps his clothes on in the extreme heat.

Near to when Jack has been introduced he ‘came forward, vaulted onto the platform, with his cloak flying,’ this represents either the prince of darkness or a vampire. ‘And peered and to what to him was complete darkness.’ This represents the dark which is a metaphor for evil.

What do we learn about Ralph, Piggy and Jack in the First chapter of Lord of the Flies?. (2020, Jun 02). Retrieved from http://studymoose.com/learn-ralph-piggy-jack-first-chapter-lord-flies-new-essay 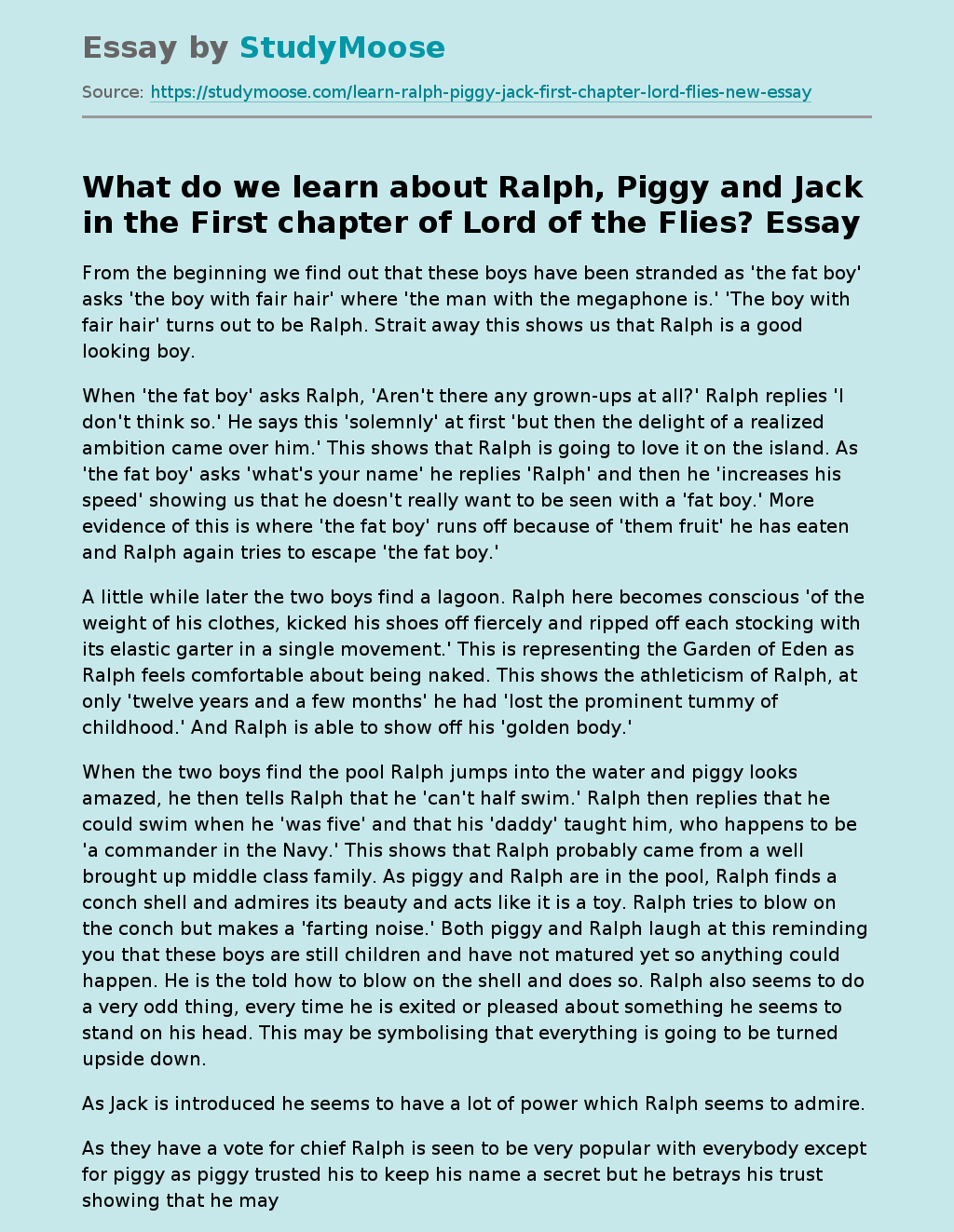