It may come as a surprise that forgiving is a skill you can hone, and that granting forgiveness may actually do more for you than the person you forgive. Harvard Women’s Health Watch discusses the following five positive health effects of forgiving that have been scientifically studied: Reduced stress. Researchers found that mentally nursing a grudge puts your body through the same strains as a major stressful event: Muscles tense, blood pressure rises, and sweating increases.

Don't use plagiarized sources. Get your custom essay on
“ Learn How to Forgive and Ability to Forgiveness ”
Get custom paper
NEW! smart matching with writer

Better heart health. One study found a link between forgiving someone for a betrayal and improvements in blood pressure and heart rate, and a decreased workload for the heart. Stronger relationships. A 2004 study showed that women who were able to forgive their spouses and feel benevolent toward them resolved conflicts more effectively. Reduced pain. A small study on people with chronic back pain found that those who practiced meditation focusing on converting anger to compassion felt less pain and anxiety than those who received regular care.

Greater happiness. When you forgive someone, you make yourself—rather than the person who hurt you—responsible for your happiness. One survey showed that people who talk about forgiveness during psychotherapy sessions experience greater improvements than those who don’t. Although forgiveness brings many benefits, particularly to the ‘forgiver,’ to forgive is not always easy. In fact, many people who would like to let go of anger and forgive are stumped with the question of how to forgive.

While everyone may have a unique perspective on how to forgive, the following strategies have been proven effective for a variety of people. Express Yourself In contemplating how to forgive someone, it may or may not help to express your feelings to the other person. If the relationship is important to you and you would like to maintain it, it may be very useful for you to tell the other person — in non-threatening language — how their actions affected you (see this article on conflict resolution for tips).

If the person is no longer in your life, if you want to cut off the relationship, or if you have reason to believe that things will get much worse if you address the situation directly, you may want to just write a letter and tear it up (or burn it) and move on. It still may help to put your feelings into words as part of letting go. People don’t need to know that you’ve forgiven them; forgiveness is more for you than for the other person. Look For the Positive

Journaling about a situation where you were hurt or wronged can help you process what happened and move on; however, the way you write about it and what you choose to focus on can make all the difference in how easy it becomes to forgive. Research shows that journaling about the benefits you’ve gotten from a negative situation — rather than focusing on the emotions you have surrounding the event, or writing about something unrelated — can actually help you to forgive and move on more easily.

Read this piece for more on that forgiveness research. ) So pick up a pen and start journaling about the silver lining next time you find someone raining on your parade, or keep an ongoing gratitude journal and forgive a little every day. Cultivate Empathy While you don’t have to agree with what the other person did to you, when working on how to forgive, it often helps to put yourself in the other person’s shoes. Research has shown that empathy, particularly with men, is associated with forgiveness, and can make the process easier.

Instead of seeing them as ‘the enemy,’ try to understand the factors that they were dealing with. Were they going through a particularly difficult time in their lives? Have you ever made similar mistakes? Try to remember the other person’s good qualities, assume that their motives were not to purposely cause you pain (unless you have clear indicators otherwise), and you may find it easier to forgive. Protect Yourself and Move On One of my favorite cliches is: ‘First time, shame on you; second time, shame on me. Sometimes it’s difficult to forgive if you feel that forgiveness leaves you open to the future repeats of same negative treatment. It’s important to understand that forgiveness is not the same as condoning the offending action, and it’s OK (and sometimes vital) to include self-protective plans for the future as part of your forgiveness process. For example, if you have a co-worker who continually steals your ideas, belittles you in front of the group, or gossips about you, such ongoing negative behavior can be difficult to forgive.

In fact, blanket forgiveness of someone who is continually hurting you isn’t necessarily a good idea for your emotional health anyway. However, if you make a plan to address the behavior with human resources, move to another department, or switch jobs to get out of the negative situation, letting go of your anger and trying to forgive will bring the benefits of forgiveness without opening you up to further abuse. You don’t need to hold a grudge in order to protect yourself.

Get Help If You Need It Sometimes it can be difficult to forget about the past and forgive, particularly if the offending acts were ongoing or traumatic. If you’re still having difficulty knowing how to forgive someone who’s wronged you in a significant way, you may have better success working with a therapist who can help you work through your feelings on a deeper level and personally support you through the process. When you’ve been hurt, figuring out how to forgive can be difficult. These strategies should be helpful in your journey of letting go and releasing the stress of the past.

Benefits of Forgiveness Betrayal, aggression, and just plain insensitivity: People can hurt us in a million ways, and forgiveness isn’t always easy. Whether you’ve been cut off in traffic, slighted by your mother-in-law, betrayed by a spouse, or badmouthed by a co-worker, most of us are faced with a variety of situations that we can choose to ruminate over or forgive. But forgiveness, like so many things in life, is easier said than done. Forgiveness can be a challenge for several reasons.

One study from the Journal of Behavioral Medicine found forgiveness to be associated with lower heart rate and blood pressure as well as stress relief. This can bring long-term health benefits for your heart and overall health. * A later study found forgiveness to be positively associated with five measures of health: physical symptoms, medications used, sleep quality, fatigue, and somatic complaints. It seems that the reduction in negative affect (depressive symptoms), strengthened spirituality, conflict management and stress relief one finds through forgiveness all have a significant impact on overall health.

So, to sum it up, forgiveness is good for your body, your relationships, and your place in the world. That’s reason enough to convince virtually anyone to do the work of letting go of anger and working on forgiveness. Forgiveness Boosts Health Forgiveness is not only a virtue, it’s a health-booster, too. Anger, bitterness and resentment are natural human emotions. But holding a grudge against your sister for not having arthritis or hanging onto jealousy over a coworker for snagging your well-deserved promotion may negatively impact your health – including your arthritis.

Forgiveness – giving up resentment or anger toward another – can greatly reduce your body’s anger and stress responses, which adversely affect your mental and physical health. Research conducted by the University of Michigan’s Institute for Social Research, Ann Arbor, reported that people who forgive themselves and others experience reduced feelings of restlessness, nervousness and hopelessness. Other research, including a University of Tennessee-Knoxville study, has found forgiveness can also lower blood pressure and heart rates. Stress exacerbates pain, tightens muscles and interferes with the smooth running of the immune system – all things that have an effect on arthritis,” says Fred Luskin, PhD, director of the Forgiveness Project at Stanford University, Stanford, Calif.

“People think they have this unlimited storage of anger, judgment and hostility that will never come home to roost, but it comes home immediately. ” And good news: You don’t have to be Gandhi to forgive others or ask for forgiveness. Forgiveness is a teachable skill; you can learn it just like you learn to play the piano,” says Luskin. Remember these tips when learning to forgive: Commit yourself. Do whatever you have to do to feel better. Forgiveness is for you, not for anyone else. Get perspective. Recognize that your primary distress comes from the hurt feelings and physical upset you suffer now, not what offended or hurt you two minutes or 10 years ago. Meet positive goals. Instead of mentally replaying your hurt, seek a new and positive future.

Learn How to Forgive and Ability to Forgiveness. (2016, Nov 26). Retrieved from https://studymoose.com/learn-how-to-forgive-and-ability-to-forgiveness-essay 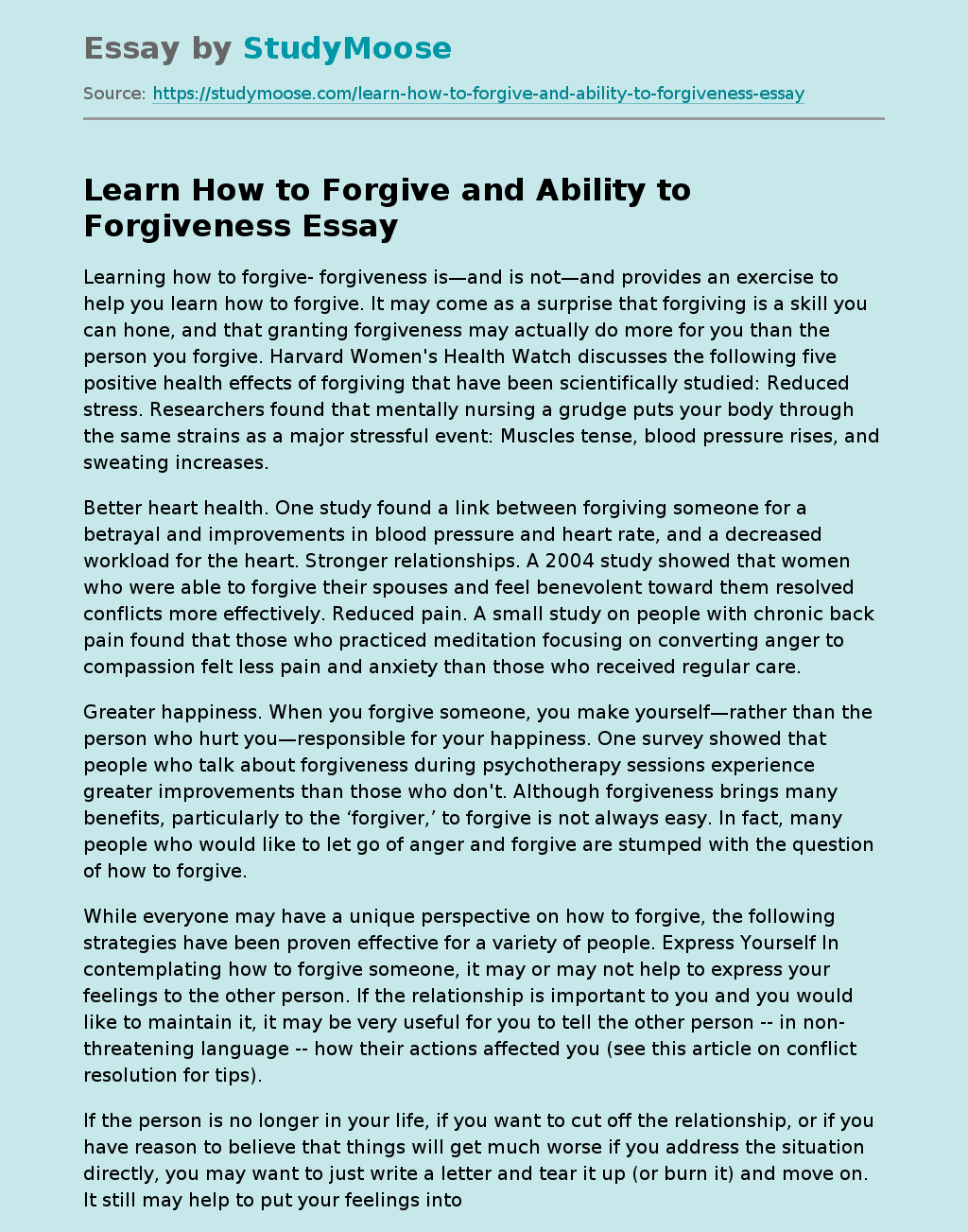