What do we learn about different aspects of prejudice in chapter seven of 'Snow Falling on Cedars' from the way Gutterson uses language?

‘Snow Falling on Cedars’ is a book filled with different aspects of prejudice. Many of these different aspects come to the forefront during chapter seven. Gutterson makes them apparent utilising a variety oflinguistic techniques that I shall discuss in this essay. At the beginning of chapter seven, the Japanese sit in a segregated manner at the back of the courtroom – ‘No law compelled them to take only these rear seats’. The Japanese feel overtly prejudiced against and, although there is no written law ‘San Piedro required it of them without calling it a law’.

Don't use plagiarized sources. Get your custom essay on
“ What do we learn about different aspects of prejudice in chapter seven of ‘Snow Falling on Cedars’ from the way Gutterson uses language? ”
Get custom paper
NEW! smart matching with writer

This shows that there is a resentment of their race, for one reason or another that makes the Japanese feel uncomfortable with sitting with the rest of the community. This is a subtle prejudice which is echoed further on in the chapter by the not-so-subtle undertones in the community. One of the main types of prejudice present in chapter seven is the depersonalisation of the Japanese members of the community ‘Jap number 1, Jap number2, Jap number 3, Japan Charlie… ‘ The prejudiced members of San do not refer to the Japanese people by their real names so that their own discriminations can be justified.

By not giving the Japanese their own identities, the prejudiced community can get away with abusing them without a conscience. Gutterson lists the different amenities that the Japanese community have in their area of San Piedro – ‘an ice cream parlour, a tofu shop’. By placing a typically American shop – the ice cream parlour – next to a stereotypical Japanese shop in the list – a tofu shop – Gutterson manages to convey that the San Piedro islanders believe that Japanese have almost invaded American territory – they are not welcome.

This is another aspect of San Piedro’s prejudice. San Piedro also makes it almost impossible for the Japanese to buy land – it is impossible to buy land unless a person is a citizen but ‘it also said that they could not become citizens so long as they were Japanese’. This is a ‘catch 22’. This type of discrimination is not remotely subtle. Gutterson conveys this by using his language in an obvious manner. To convey all these opinions of the white San Piedro community, Gutterson refers to the Japanese in third person -‘They saved their money in canning jars’.

This separates the reader from the Japanese and places them on the side of the white community. The ‘Strawberry Festival’ is the one event that unites both communities in San Piedro – ‘the girl… was an unwitting intermediary between two communities, a human sacrifice who allowed the festivities to go forward with no uttered ill will’. At this stage, Gutterson writes objectively with no sentiment to either community, which allows the reader to view the community in an unbiased manner.

Just before the end of this part of the story, Gutterson mentions Pearl Harbour then immediately reverts back to the third person by referring to the Japanese as ‘they’ once more – ‘They were loaded onto a ship’. This symbolises the fact that Pearl Harbour changed everything, forever abolishing any hope of unity within San Piedro. This is particularly important to remember for the rest of the novel. The next part of the chapter is situated in the courtroom. Gutterson writes with a particular sympathy to Hatsue and the Japanese in this section.

Hatsue talks about her own feelings of personal turmoil in this section – a sense of division between two different cultures and her guilt at her desire to be American. Gutterson uses Mrs Shigemura to convey the stereotypical Japanese citizen. Her character tries to convince Hatsue to be Japanese despite living in USA. Mrs Shigemura is also prejudiced in a different way – against the white citizens of San Piedro – ‘Stay away from white men’. This shows that Mrs Shigemura has a fear of the white community – in the same way as the white community has a fear of the Japanese.

This is often expressed in San Piedro in prejudice. Gutterson also lists various things that are connected to the American way of life as a contrast to Mrs Shigemura to emphasise Hatsue’s self-division ‘her craving for existence and entertainment, clothes, makeup, dances, movies’. Hatsue’s internal division is one of the central themes of the plot – could a person be both Japanese and living in America? Kabuo goes to the war to fight on the American side. He leaves behind Hatsue. Kabuo’s reason for doing this is ‘it was also a matter of having to go because his face was Japanese’.

This really underpins the essence of the prejudice in America at the time. The way a person looked defined who they were and this is the main type prejudice present in San Piedro. Throughout the chapter, Gutterson’s main linguistic tool is perspective. He utilises this to switch the reader’s viewpoint. Gutterson uses several Japanese words to show that he is now writing on the side of the Japanese for example ‘baishakunin’ and ‘Tadaima aware ga wakatta’, just as previously he had referred to the Japanese in third person to show that he was writing from the viewpoint of the white San Piedro citizens.

In this way, chapter seven is similar to chapters focusing on the courtroom action. One piece of evidence is presented ‘They lived in cedar slat huts… ‘ then there is an objective description ‘The girl, it turned out, was an unwitting intermediary… ‘ then there is the other side of the coin ‘Tadaima aware ga wakatta’. In this way, Gutterson keeps his structure consistent throughout the novel, even if the subject matter differentiates. His use of obvious language conveys obvious prejudice.

For example ‘The law said that they could not own land unless they became citizens… ‘ On the other hand, Gutterson uses subtle language to convey the quiet undertones of prejudice present in San Piedro ‘Jap number 57 dislocated his right hip’. This derogatory depersonalisation of the Japanese in the word ‘Japs’ is present throughout the novel. Gutterson makes the theme of prejudice evident in chapter seven both through the use of perspective and by using language to convey a particular viewpoint. Gutterson allows language to represent culture.

The difference in language used by both groups emphasises the divide between the Japanese and the white citizens in San Piedro. Gutterson uses harsh language when referring to the Japanese from the white perspective so that, despite seemingly seeing life through the white community’s eyes, the reader automatically feels sympathy for the Japanese thus becoming biased towards them. It is very important that the reader feels this way in order to appreciate and understand the remaining chapters of ‘Snow Falling on Cedars’.

What do we learn about different aspects of prejudice in chapter seven of 'Snow Falling on Cedars' from the way Gutterson uses language?. (2020, Jun 02). Retrieved from https://studymoose.com/learn-different-aspects-prejudice-chapter-seven-snow-falling-cedars-way-gutterson-uses-language-new-essay 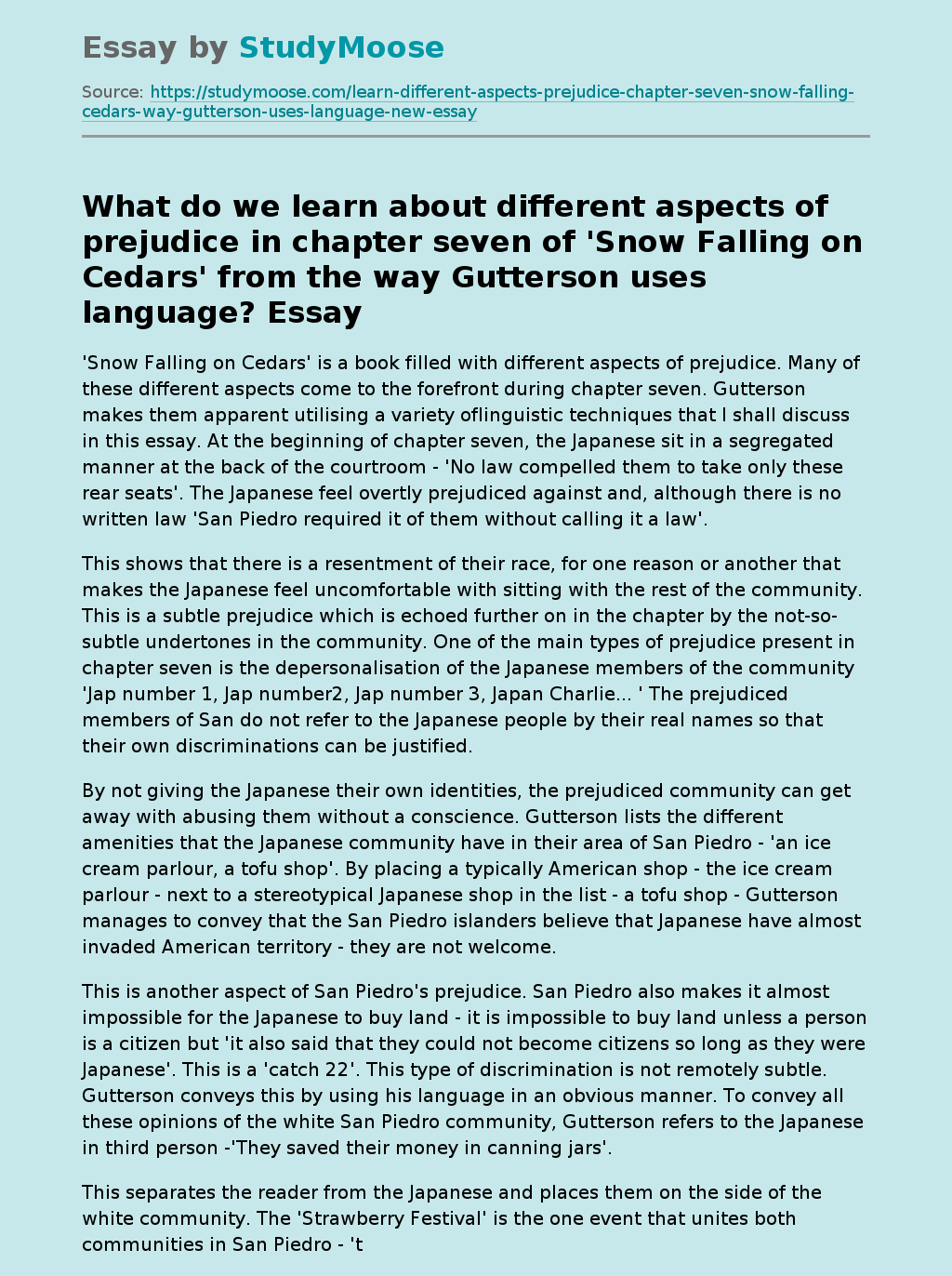