Lean management as a public healthcare perfomance driver in

This chapter provides conceptual backgrounds of lean management and how it has become a driver for performance improvements in the healthcare industry. The information given was extracted for already existing literature across the globe in an effort to bring perspective to the study. The extracted chunks of synthesized literature were categorized according to the study objectives highlighting the knowledge gaps that the research sought to cover.

The term lean is believed to have been coined by John F. Krafcik in 1988 in his article ‘Triumph of the Lean Production System’.

Don't use plagiarized sources. Get your custom essay on
“ Lean management as a public healthcare perfomance driver in ”
Get custom paper
NEW! smart matching with writer

Since the philosophy had been developed for car manufacturing industry, the concepts back then were mostly centered on the production industry. Hence the reason why lean management is said to have its roots in the Toyota Production System (TPS) (Liker, 2004) where its main focus was improving productivity efficiency in car manufacturing. Lean is also known as a brainchild of Taiichi Ohno and Shigeo Shingo, senior engineers who had long careers at the Toyota Motor Corporation from the 1940s (McCann, Hassard, Granter, & Hyde, 2015).

The term lean was then popularized by Womack and Jones around 1990 when they published their book entitled ‘The Machine that Changed the World’ which basically described lean as a means to achieve more with less (Womack, Jones, & Roos, 1990).

In the field of operations management, literature suggests that lean management can be defined in several ways (Joosten, 2009). Shar & Ward, (2007) defined lean management as a complex intervention in the form of an intergrated socio-technical system to eliminate waste by concurrently reducing supplier, customer and internal variability.

Other authors defined it as a system designed for people to continually improve their work and provide value to the product or service, they were producing (Dickson, Zlakto, Vetterik, Eller, & Singh, 2009). According to Wommack, et al., (2007) and Liker, (2004), lean is defined as a set of philosophies, principles, and methods for redesigning organisations to maximise value and minimise waste thus improving perfomance. Toussaint & Berry, (2013) futher defined lean as a complete organisational transformation in a quest to discover ways of improving daily work. For the purposes of this study, however, the underlying ideas of lean management were that of involving all employees in reducing waste, maximizing value hence increased performance.

Lean management has however, since evolved and moved to other areas like the service industry including healthcare (Holden , Eriksson, Andreasson , Williamson, & Delve, 2014; Radnor & Walley, 2008) and widely promoted for use in public administration (Carter, Danford, & Howcroft, 2011). It was highly regarded as a set of techniques that would transform any sector hence its adoption in healthcare. Scholars like Schonberger, (2018) have argued that since lean management was not doing so well in manufacturing where it originated from, chances were that no better results would be ripped from lean healthcare initiatives. Other skeptics like Radnor, Holweg, & Waring, (2012) pointed out some interesting conclusions from their NHS studies where they concluded that lean was producing very localised results which somehow meant that its impact was overrated. The other conclussion was that upscalling lean management in healthcare to system level would turn out unimpressive since healthcare is capacity led and as it stands, it would be difficult to free up resources towards its success (Radnor, et al, 2012).

Despite the noted perceived challenges, lean thinking still holds great promises especially for healthcare settings that are continually striving to overcome the pressures of providing better health services by improving quality and lowering costs (Toussaint & Berry, 2013). Lean thinking according to Herzog & Tonchia, (2014) is well known for and broadly accepted to be linked to high perfomance and excellence.

From time immemorial, healthcare industry has been known as a rigid and complex multi-professional discipline with strict structures and ways of doing things. It was also known to have strong leadership and managerial models albeit conservative in nature (Maijala, Eloranta, Reunanen & Ikonen, 2018). This has led to a requirement for transformation in ways that would redesign healthcare to be able to make the best of the scarce resources (Maijala, et al., 2018; Aij & Rapsaniotis, 2017) and this has led to the consideration of lean as one such ideology.

‘Lean’ or ‘lean healthcare’ are the terms used to describe process flow solutions that create even patient flows (Radnor, Walley, Stephens, & Bucci, 2006). Graban, (2008) has defined lean healthcare as management philosophies designed to transform the way hospitals were managed in a bid to improve the quality of care for patients by reducing errors and wait times while supporting employees, eliminating roadblocks and allowing them to focus on providing care. In support of the same notion, Love, Teo, Carey, Sing, & Ackermann, (2015) noted that there is a symbiotic relationship between safety, quality and perfomance. In order to address all those issues by adopting lean principles, it is a general requirement to know all the activities and the processes that then need to be streamlined in order to create value (Centauri, Mazoccato, Villa, & Marsilio, 2018).

In healthcare today, several factors have driven the adoption of lean techniques and principles. These include quality and patient safety, cost, waiting time and employee satisfaction (Costa, Filho, Rentes, Bertani, & Mardegon, 2015; Graban, 2008). The major challenges faced by health institutions are with regards to improving operational efficiencies and overall hospital performance especially when faced with increasing catchment populations to serve with limited resources (Radnor & Walley, 2008). At the same time, they also face restricted or inadequate budgets, which is further exacerbated by the economic crisis, and there is therefore a need to utilize the scarce resources effectively and efficiently (Hasle, Nielsen, & Edwards, 2016). One of the ways to solve these challenges is through making the hospitals lean.

Lean healthcare has grown in popularity over the years (Hasle et.al., 2016) in an effort to curb the healthcare challenges (Radnor, et al., 2012). The

Lean management as a public healthcare perfomance driver in. (2019, Nov 17). Retrieved from https://studymoose.com/lean-management-as-a-public-healthcare-perfomance-driver-in-example-essay 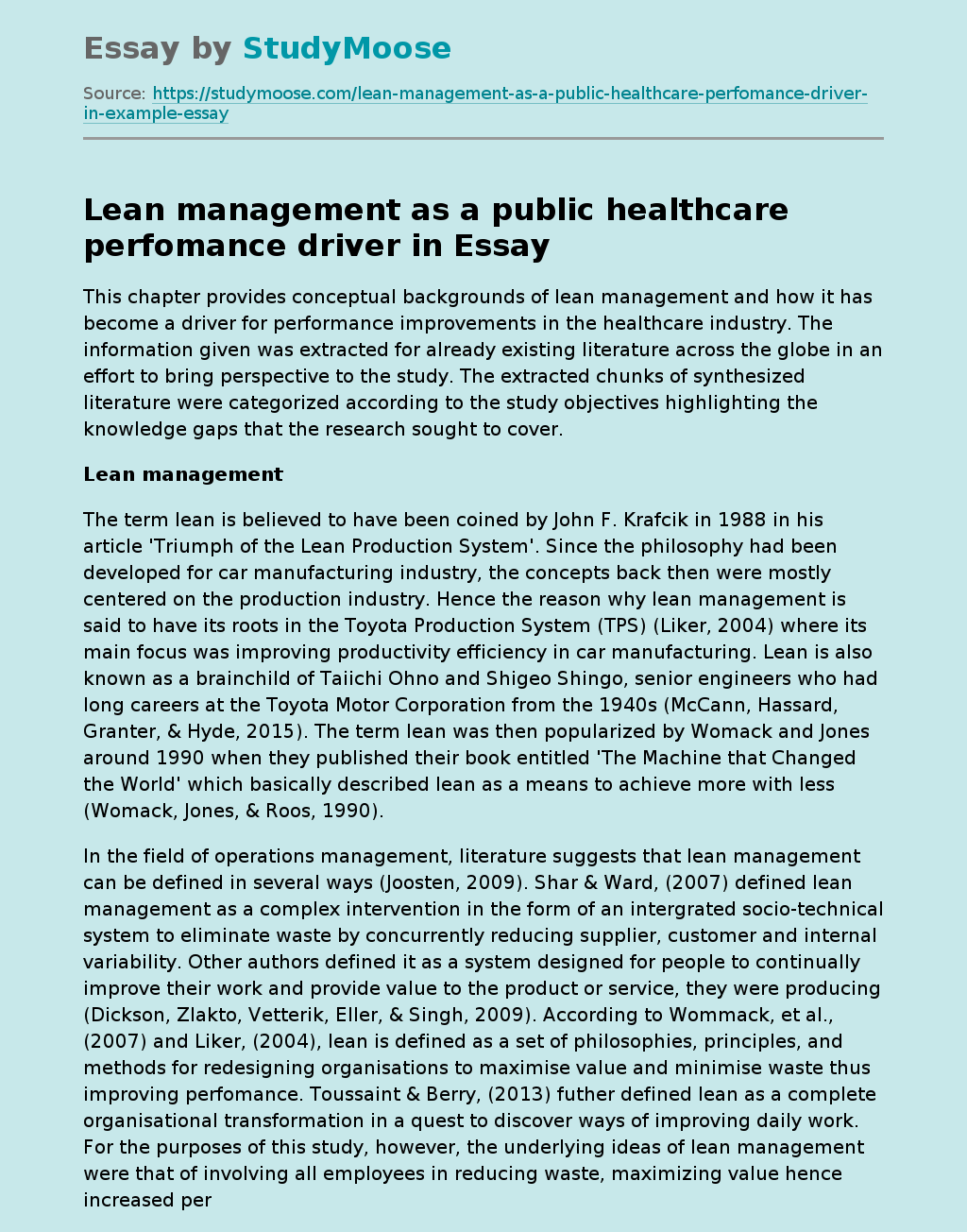