Leadership Theory in the Wizard of Oz

Don't use plagiarized sources. Get your custom essay on
“ Leadership Theory in the Wizard of Oz ”
Get custom paper
NEW! smart matching with writer

The leader’s job is to guide their team to the correct path to meet their goals. The leader is responsible for the motivation, satisfaction and performance of their subordinates based on the style of leadership they choose in any given situation. The theory outlines four styles of leadership applicable to different situations. They are directive leadership, supportive leadership, participative leadership and achievement-oriented leadership.

Each of these four styles is demonstrated in The Wizard of Oz.

Directive leadership is when a leader tells their subordinates what to do and how to do it. This style of leadership is best used in ambiguous situations when a subordinate’s role is not clearly defined. This style is demonstrated by Glynda the witch of the North in her first encounter with Dorothy. Dorothy’s goal is clear – she wants to get home to Kansas. In order to achieve this goal, Glynda directs Dorothy to follow the yellow brick road to see the Wizard of Oz. She explains both the goal (get to the wizard) and specifically how to achieve this goal (follow the yellow brick road).

In this situation, Dorothy is grateful for Glynda’s direction because she was unsure of how to proceed on her own and the leadership both increases Dorothy’s satisfaction and gets the job done. A second example of directive leadership is seen in Glynda’s nemesis, the Wicked Witch of the West and how she handles her subordinates, the guards and the flying monkeys. The Wicked Witch gives very direct orders to her helpers. First, when sending the flying monkeys after Dorothy and her ompanions, the Witch clearly outlines her goal which is to retrieve the ruby slippers and gives the monkeys specific instructions to bring Dorothy to her unharmed and to keep the others out of the way. Again, when Dorothy’s companions come to rescue her, the Witch is seen giving the guards explicit instructions to chase them down yelling “seize them” and “half of you go this way and half of you go that way! ” This style is less effective for the Wicked Witch of the West then it is for Glynda. She gets the job done, but she fails to gain the loyalty of her subordinates. In fact, they rejoice in her death as much as her enemies do.

As the theory asserts, directive leadership is not ideal for situations where the subordinates are in jobs that are habitual or accustomed. Employing directive behavior in this type of situation will decrease an employee’s satisfaction as demonstrated by the Wicked Witch. Supportive Leadership: Supportive leadership is employed when the leader is sensitive to their subordinates needs and shows concern for their psychological well being. Supportive behaviors include being friendly and approachable. This style of leadership is best suited to situations that are distressing, either physically or psychologically.

It is also helpful to increase satisfaction for employees who have routine or repetitive jobs. One example of supportive leadership in the movie is when Dorothy oils the Tin man. She pays close attention to his needs and shows concern for the rusted state that he has been in. This care inspires the Tin man to follow Dorothy and remain loyal to her in throughout their journey to Oz. Similarly, Glynda is monitoring the safety of Dorothy and her companions throughout their journey. When they are poisoned by the poppy field, Glynda steps in to help them through by making it snow. This support is vital to the team’s success in making it to Oz.

Participative Leadership: Another style of leadership is participative leadership in which decisions are made in consultation with the group. This style is best employed when one’s subordinates are personally invested in their work. For example, Dorothy uses this style when discussing with the Scarecrow whether he should accompany her on her trip to Oz. Dorothy presents the Scarecrow with the benefits and risks involved and allows him to participate in making the decision to come with her. The Scarecrow also uses this style when breaking into the Witch’s castle to rescue Dorothy.

He presents an idea to the Tin Man and the Lion to get their buy in and execute the plan together. This style of leadership is effective in both these examples because all the participants are personally invested in the outcome of the trip and want the project to be a success. Achievement-Oriented Leadership: The final style of leadership presented by the Path-Goal theory is called achievement-oriented leadership. In this style, a leader shows confidence in their group’s ability by setting challenging goals. This style is most often used in technical, scientific or entrepreneurial jobs.

Leadership Theory in the Wizard of Oz. (2020, Jun 02). Retrieved from https://studymoose.com/leadership-theory-in-the-wizard-of-oz-new-essay 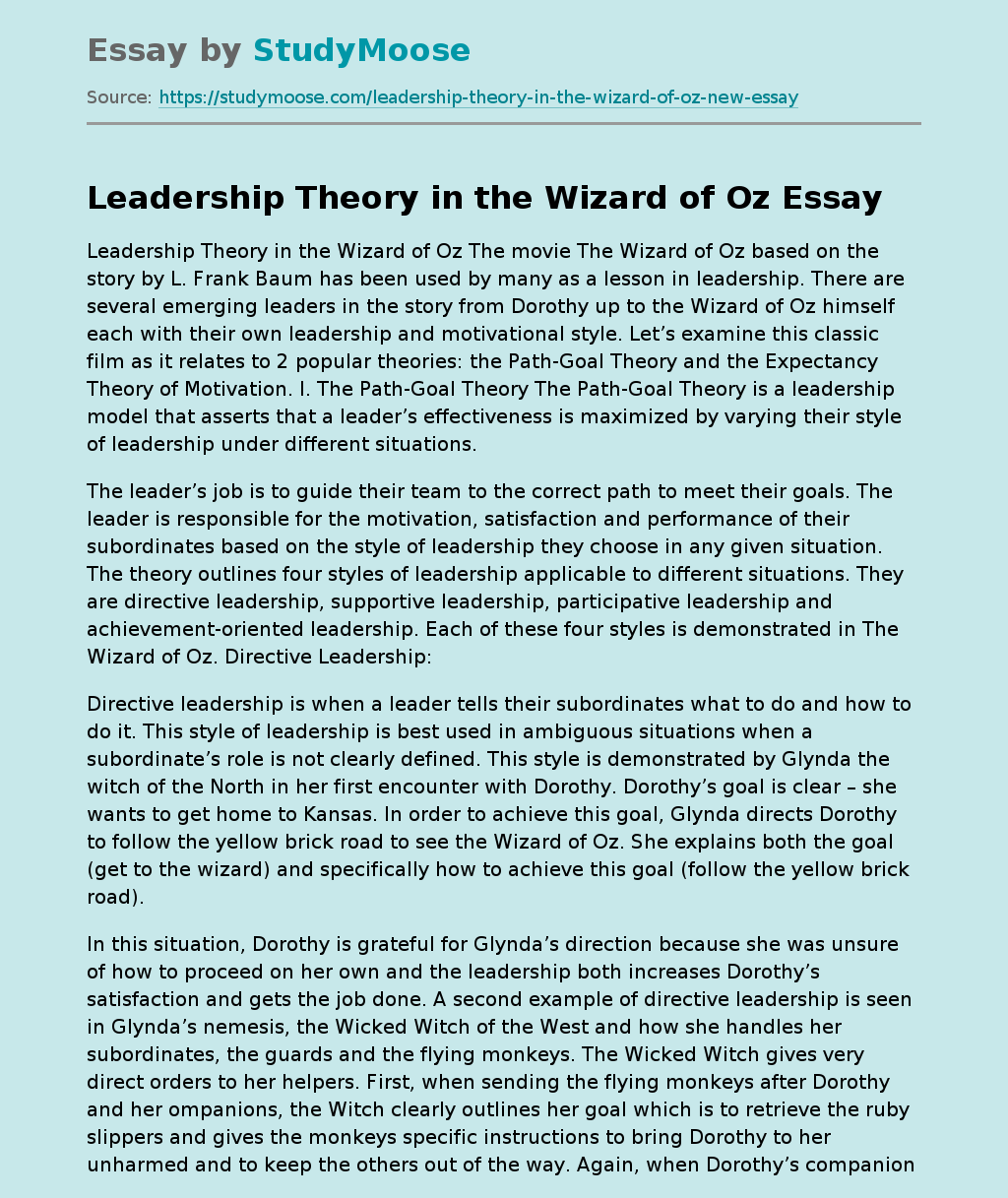