Dr. Martin Luther King, Jr. was one of the utmost and futurist leaders that the world has ever experienced. His mark is consummate and the weight of his endeavors will be realized by many generations. There are numerous traits that molded Martin Luther King to the universal rights principal during his days. This very leadership proficiency can be duplicated in nursing practice that would mould us into professionals, partner, person and friend all around. Martin Luther King possessed a lot of traits that explain why he was very vibrant and prominent as a civil rights leader.

Don't use plagiarized sources. Get your custom essay on
“ Quality caring in nursing: applying theory to clinical practice, education, and leadership ”
Get custom paper
NEW! smart matching with writer

The purpose of this paper is to demonstrate how Martin Luther King leadership skills can be applied in nursing and health care.

I believe this will help me to find a pleasant career, expand my self-awareness, become an influential leader or improve affiliation skills in nursing and health practices. However, there are eight Myers Briggs personality types. To become a fulfilled and effective leader I have to maintain an excellent balance between my contextual demand and my preferences. Leadership profile is a unique combination of preferences for the eight styles. I prefer to use a balance of all the styles.

In addition, being a good leader depends on the culture and context. I am a participative leader since I love to engage people in the directive taken and its achievement. I love valuing other people to attain the objective through cooperative teamwork (Duffy, 2009).

I am also a change-oriented leader. I believe this is a very crucial tool which enables me to cope with the changing world. I love exploring and inventing new ways of carrying out my duties in nursing and health care. I am also an ideological leader who likes to achieve via endorsement of some values, ideals and maintaining the focus of the group on significant issues. As a visionary leader, I like developing unique sense of the unknown by focusing on future plans, evaluating the client’s demands and evaluating the trend in the market. As an executive leader, I introduce the nursing and health care organization into the manner things are carried out. I am also a goal oriented leader where I have to set specific and achievable goals based on my competence. As an action-oriented leader I love leading as an example in the institution. Lastly, as a theorist leader I like identifying appropriate models of how the institutions can be administered (Goldsmith,2010).

Martin Luther King on the other hand had set of qualities that marked him as an inspirational leader. He was a persistent leader. One of the famous traits of Martin Luther king, Jr. was his persistent endeavors to lead, inspire and change. He was also a committed leader since no matter how much he achieved, he continued to seek for more. He was also a goal-oriented leader since regardless of many hindrances Luther kept restating the end goal. He was an inspirational leader since he acknowledged that to achieve his objectives; he had to inspire those who had faith in his vision. Dr. Martin Luther King was also a change-oriented leader who constantly pursued new directions. He addressed the issue of civic rights from all directions regardless of violence, attacks or violence. He was also a visionary leader since his objective was beyond sharing his message with the public. Retrieved from http://brandredresume.com/10-leadership-qualities-of-dr-martin-luther-king-jr

Martin Luther King was an executive leader since he demanded for respect and tolerance to everyone thus becoming the pioneer. He was also a theorist leader since he made efforts was to transform his followers. Martin Luther was an ideological leader who was not afraid to uncover unchartered territories in civil rights. Lastly, he was an action oriented leader who was straight forward in his message. These traits made Martin Luther King a famous inspirational leader whose leadership styles can be emulated by generations. Martin Luther King transformational leadership was very effective since most transformational leaders are charismatic in nature. He had an exceptional approach of making people to work in unity rather than involving in frequent clashes. He listened calmly as other people argued and lastly call off the debate by coming up with the way forward. These traits helped Luther to unite people to work together in unity. I share various traits with Martin Luther King such as visionary, change-oriented, action-oriented, and executive leader. These traits can be very effective if applied in the nursing and health care since it is a field that requires dedication and innovativeness. Retrieved from http://brandredresume.com/10-leadership-qualities-of-dr-martin-luther-king-jr

In conclusion, there are several leadership styles which a leader should possess in order to be influential in their role. However, it is very crucial to balance between preference and contextual demand. Good leaders must have an objective so that they may lay down appropriate strategies to attain those goals. This also calls for persistence and commitment in attending the duties which will enable leaders to achieve their end goals. Martin Luther King left an irreplaceable mark as his exceptional leadership styles inspires many leaders and can be emulated in different leadership roles in organizations. The nursing and health sector require people with good leadership styles since it is a very demanding organization. In addition, the constant changing world requires organizations to be change-oriented so that they can cope with these changes. 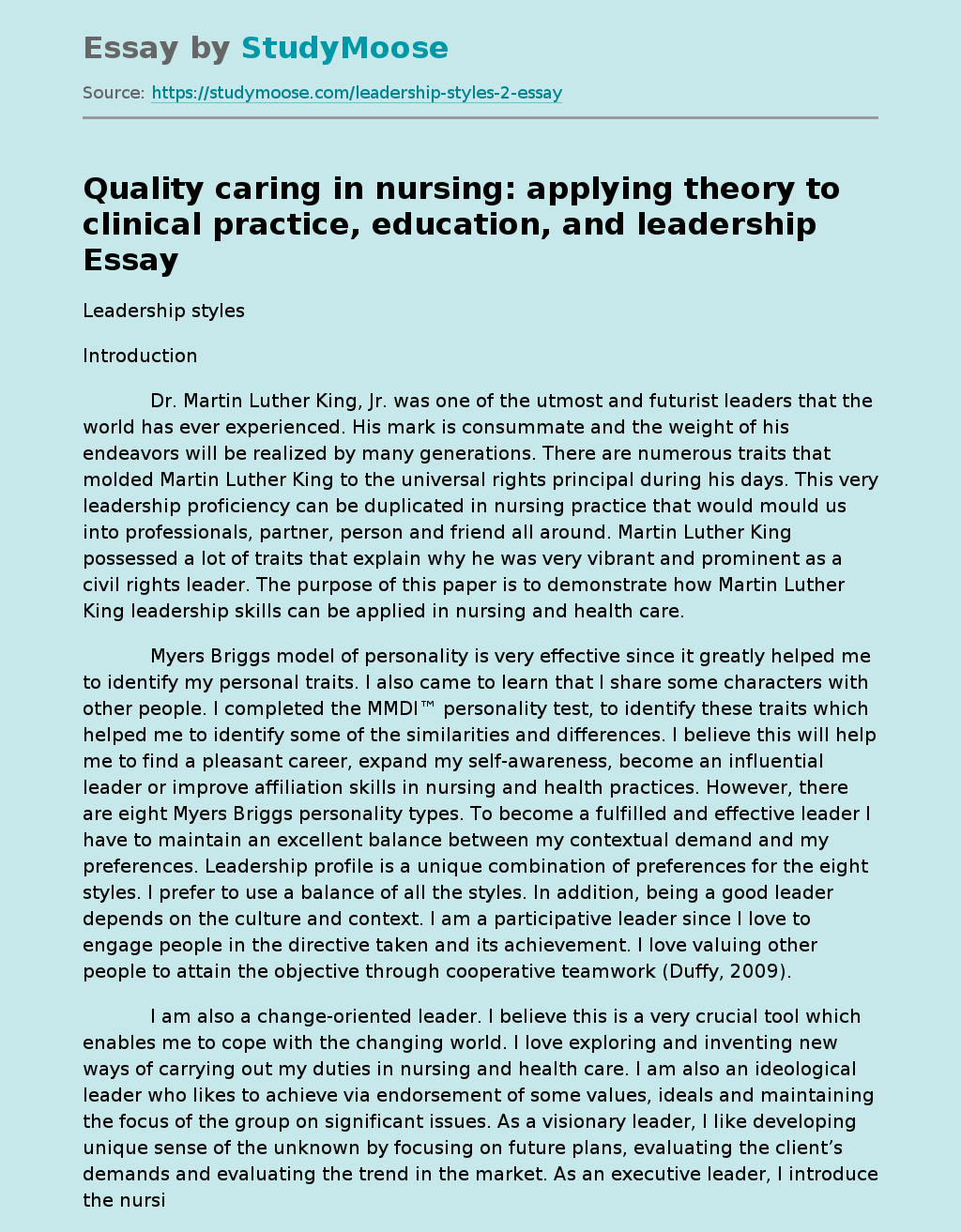