Turn in your highest-quality paper
Get a qualified writer to help you with
“ Leadership in Criminal Justice Organizations ”
Get high-quality paper
NEW! AI matching with writers

It is corruption committed in order to get the bad guys off the streets…the corruption of police power, when officers do bad things because they believe that the outcomes will be good” (Noble Cause Corruption).

Some examples of noble cause corruption include falsifying or planting evidence, committing perjury court, writing incorrect information on police reports, and abusing police authority. Ensuring that employees are trained properly can help prevent corruption. The court system, police and corrections have a special language or dialect that they use within that specific organization. Different jargon amongst these criminal justice organizations can create miscommunication between the manager and the employee.

Duelin (n.d.), “leaders need to be effective communicators to handle these challenges” (para. What are the Challenges with Leading Groups in Criminal Justice Organizations?) Management needs to make sure that their employees know what their job is and what is expected of them (Duelin, n.d.).

Police officers are in charge for investigating and arresting persons charged with crime, while the court system decides whether or not a punishment should be imposed. If a person is convicted, the court system also decides what that punishment it. Punishment can come in the form of community service probation, jail, or prison. The court system and law enforcement do not always agree on the type of punishment that should be carried out. Duelin (n.d.), “For example, the police often seek to remove offenders from the streets, while the courts may feel it is best to rehabilitate the offender within the community. The police, courts, and prisons wield a substantial amount of power with these responsibilities. Leadership for these criminal justice agencies must balance this power with fairness” (para. What are the Challenges with Leading Groups in Criminal Justice Organizations?).

Police are required to enforce laws and arrest anyone who breaks them. The court system role is to make sure that the individual’s rights are not violated in any way. Politics can have a major effect on criminal cases. An election year can lead to a number of changes in the criminal justice organization. Different judges, sheriffs, or district attorneys may be elected. All leaders and employees of law enforcement and judicial system need to stay informed of any laws that may have changed. One must be aware of political alliances at all times. Political alliances can jeopardize the outcome of a trial (Duelin, n.d.). Many organizations across the United States have been dealing with the issue of budget cuts. Budget cuts can be the result of financial cuts from the city or state or if a citizen is elected into a new position. As the population increases, so does crime.

Budget cuts can eliminate necessary jobs that are needed to help keep society safe. Eliminating jobs causes an increase in the amount of work for the remaining employees left. Increasing the workload, in turn can create fatigue and stress. Employees are not able to do their job efficiently if they are overwhelmed with work. With new employees taking over their positions, comes new budgets to adhere to. One has to remain knowledgeable of all new rules, regulations, and budget cuts when someone new is elected into office. As times change, so should the way we manage the criminal justice system. The Criminal justice system must stay advance in order to prevent crime and protect society. There are many steps that one can take as a criminal justice or security professional to affect change for the future. Over the past decade, technology has advanced greatly in the criminal justice system.

Every organization should have the same technology. Different versions of computer programs make it difficult for states and federal organizations to communicate effectively. Sometimes information is not up to date or it may take a while for a different organization to retrieve the information. It would be beneficial to all if every organization had access to the same computer software. For example, criminal justice organizations can improve sex offender communication. Often times, sex offenders fall between the cracks of the system. They are not monitored correctly and fail to register on the sex offenders list. Sometimes, these offenders work for jobs that are a clear violation of their release. If every state and organization had the same software or technology available these offenders can be monitored closely. It is important that all employees and leaders undergo training every year.

Ethics and moral standards should be the main focus of team workshops and classes. It is important that all employees maintain a certain level of respect for the law and society. Employees should also undergo psychological examines. Sometimes in the line of duty an officer may see something traumatic or have some type of trauma. This can have a detrimental effect on an officers’ mind. The officer may not feel comfortable asking for help; therefore, psychological examines can show what areas are of major concern for that particular individual. There should be a balance between private and public security. Public and private security partnerships are vital resources for law enforcement today. “Law enforcement agencies posses the legal authority and training to enforce the law.

Carter (2007), “Private industry, with approximately triple the personnel resources of the law enforcement community, is more advanced in the use of technology to prevent and detect crime and is uniquely able to address certain crimes, such as workplace violence or computer crimes (para. Public-Private Partnerships: Vital Resources for Law Enforcement).” By combining public and private security, the security of the United States will be heightened. Protecting our borders is a main concern for the United States particularly when it pertains to drug trafficking. Drugs are a major problem in the United States. In 2010, 51 percent of federal inmates were in prison for a drug offense (Klein, 2013). Drugs are often times the main reason people rob or kill others. Prisons should focus more on rehabilitation than punishment.

By placing more emphasis on rehab programs, daily support groups, and work placement programs, offenders can overcome their addiction. The United States may not be able to eliminate drugs from entering the country; however, the amount of drugs entering the country can be significantly reduced. A few ways that can help prevent drug trafficking include increasing the amount of border control agents, creating a task force whose main priority is to locate underground tunnels that cartels use for trafficking drugs, and build a wall to divide Mexico and the United States. Many critics will argue that legalizing marijuana can also decrease drug trafficking into the U.S. While other critics argue that even if marijuana is legalized it only creates an opportunity for other drugs such as cocaine, heroin, and prescription drugs to enter the country.

Even though California allowed the prescription of marijuana to some of its citizens, it had no effect on drug trafficking from Mexico because the majority of marijuana is entered through Texas and Arizona. Overall, there is not any scientific evidence that would conclude that it will either increase nor decrease the amount of drug trafficking. McKinney (2008), “in a criminal justice organization, leadership is essential to the success of the goals of the organization” (para. Modern Leadership Theories in Criminal Justice). To be a great leader one must acknowledge the issue and create ways to solve the problem at hand. Effective communication, training, and advance technology can help overcome some of the major challenges that leadership often deals with on a daily basis. 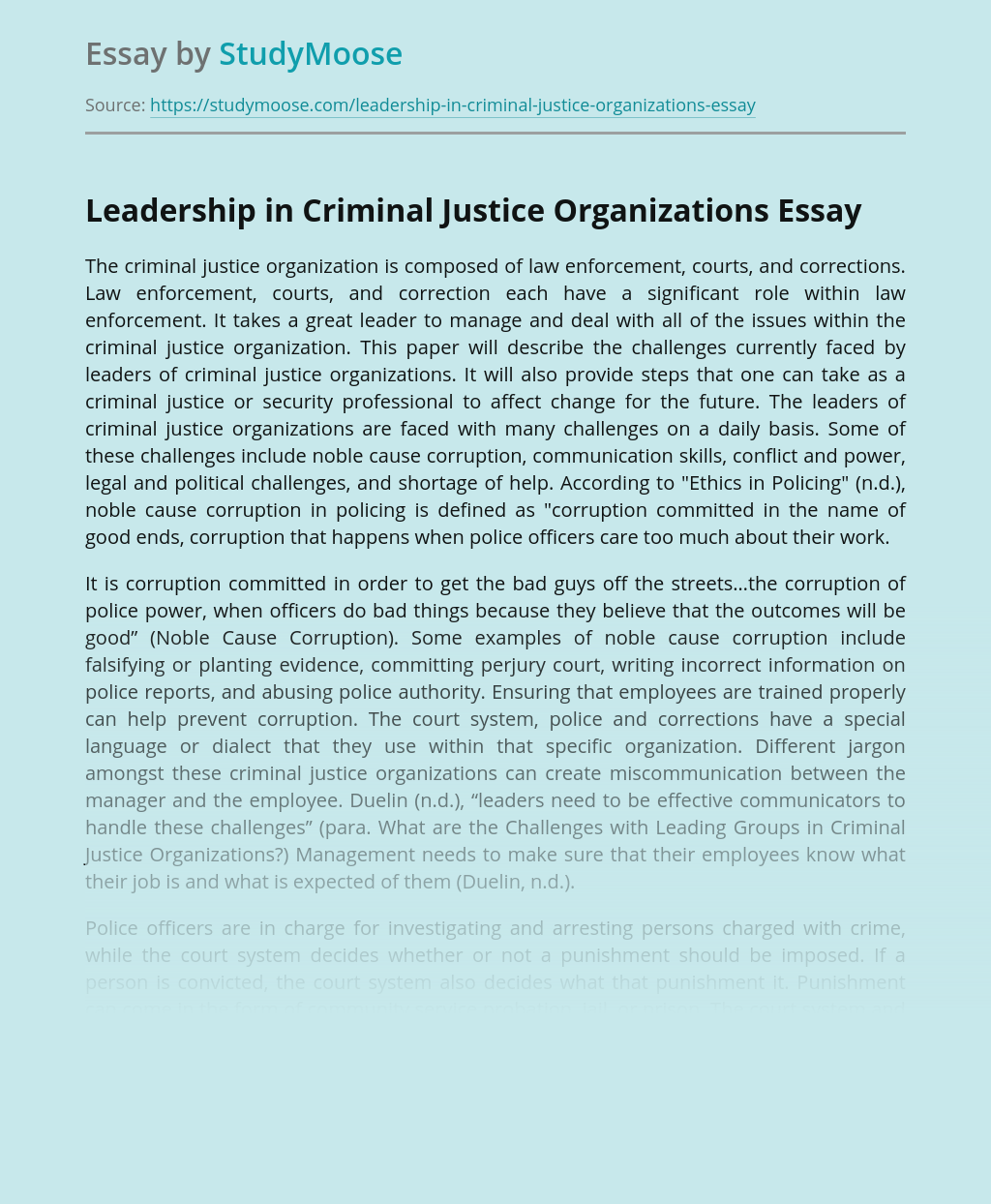 Turn in your highest-quality paper
Get a qualified writer to help you with
“ Leadership in Criminal Justice Organizations ”
Get high-quality paper
Helping students since 2015
Stay Safe, Stay Original