1. Steve Jobs had an extremely high interest in being in charge, so to start off with his leader-follower element, he most definitely settles in better on the leader end of the spectrum. Jobs was so far in the leadership end of the spectrum that he had actually been removed from his CEO position in 1985 for being unmanageable. Being one of the most charismatic leaders in the industry has helped him develop his leadership traits through his time with Apple, NeXT, and Pixar.

He has always been determined even when Apple took him out of the equation, where he went off to make some of our childhood staples such as Toy Story and gained an enormous share of stock with Disney, which was actually more than he ever owned with Apple. His influence spans across five different industries, which is more than almost any CEO can say that they have done in their entire life. His influence spanned across the computer industry, Hollywood and the movie industry, the wireless phone industry with the IPhone, the retailing industry, and my personal favorite being the music industry where ITunes has innovated the very distribution of music itself.

To the point, Steve always seemed to get what he wanted when it came to influencing these many industries. As for organizational objectives, Jobs always wanted to create a product that the customer wanted but almost didn’t even know they wanted or conceive the product in a thought, the IPod being a prime example of this.

If Jobs didn’t like the outcome of a product, he sent it back to the drawing board. Jobs and his members shared the goals to create new things they wanted, in the hopes that the customer would too. Change is a huge aspect of the way Jobs leads, all he wants to do is create technologically changing products that he and his customers really want. The constantly updating technology, yet always user friendly interface is Apples motto now a days. Steve’s people skills were apparently not the greatest, but as long as a subordinate shared in his vision of wanting to create and innovate like he did, then Apple would succeed. His people tended to respect him for the way he went about inventing new products and never wanting to fall short on anything.

2. The leadership skills that Steve Jobs possessed that made himself as well as his companies so successful were due his combination of the technical, interpersonal, and decision-making skills he possessed. Keeping up with the latest technology in the tech industry is an absolute necessity, and Steve and Apple not only kept up with the industry but innovated it every step of the way, so his technical skills were very important. Steve’s interpersonal skills were not conventional in the regular sense of the meaning, but he had his own way of developing relationships and gaining the respect of his subordinates who wished to share in his vision of giving people products that they didn’t even know they wanted. He was sure to consistently communicate this point to his employees, and motivating was one of his key qualities, such as in his key note speeches to his customers to unveil new products every year.

Lastly, and what I believe to be his most important skill that he possesses, is his decision-making skills. Jobs was able to come back to Apple and make the necessary decisions to bring it out of bankruptcy by changing the corporate culture back to an entrepreneurial environment to be the innovative company it once was. Critical thinking was a big part of his life, and Steve was known to take walks alone in an almost trance like state where he would be identifying problems and changes in the industry, know where opportunities lied, and would critically think to come up with creative ideas to be the leader and innovator in so many industries.

3. Under the interpersonal managerial leadership roles section, I believe that Steve fell under the category of figurehead and leader roles in this section. Steve was the go to speaker at the key note speeches of unveiling products, and he always had a sense of spirit about him that really made the customer believe in how much he loves the product they just unveiled, and how much Steve believed that the customer would love the product. Steve also continuously performed the leader role by giving instructions of the creation of products, why the company should head in a certain direction, or evaluating performance of research and development of new products. If Steve didn’t want to personally use it, chances are it was thrown in the trash and it was back to the drawing board. As far as the informational role category, I believe that Steve was in the monitor role as well as the spokesperson role. Steve was constantly gathering information and attending meetings in and out of the organization to create new and innovative products.

As for the spokesperson role, as I have stated previously, he was the charismatic leader that was the face and spirit of what Apple was all about, and he had the customer falling in love with a completely innovative product before they had seen anything like it before. As far as his decisional role, he was the company’s main entrepreneur as well as the main disturbance handler when Apple came to him on the verge of bankruptcy. New and improved products and services is Apple’s core belief thanks to Jobs, and his combination of these two roles saved the company single handed thanks to Steve’s enthusiasm and passion of innovation. His decisional roles that he played were by far his most important contributions since he not only saved the company from bankruptcy but also made it the innovative leader in technology for the last 20 years.

4. The primary level of analysis that this case focuses on is the organizational level of analysis. The focus is on how Steve Jobs can influence the entire organization of people to get on top of their game and to constantly be looking for change to innovate new products. He influenced the behaviors, work ethic, and productivity of all of his employees. He individually was able to completely turn the company around from bankruptcy because of the tactics he would use to influence perfection. His mind set was one way, always towards the next best product, and if he didn’t like it then the idea was scrapped. While some of his employees did not quite agree with the angry fits that Steve would have, even the employees that ended up quitting still said there was a sense of respect for what Steve was doing and his passion for it. Steve’s passion resonated throughout the entire organization, and the simple fact that his views of how the innovation culture at the workplace helped save it from bankruptcy shows his abilities. Saving Apple was not an easy task, but he was able to accomplish it.

5. The four leadership theory classifications that apply to this case are trait, behavior, contingency, and integrative. Steve’s trait paradigm involves how he acts in the environment of the organization, which included high energy levels at work whether it was anger or passion. It also included his appearance, which he appeared as an angry guy who wanted nothing but perfection, but also showed passion through it all. He was always able to persuade in his own ways, and he always showed his dominance in the workplace, which unfortunately ended up in his initial removal from Apple, but proved extremely useful in his later years. The behavior paradigm applied in the way that Steve was extremely focused on certain tasks at hand, and the way he is always the biggest critic of any and all products being proposed or worked on in the company.

The way that Steve Jobs contributed behaviorally in this case was by controlling his subordinates and demanding perfection every step of the way. The contingency paradigm shows that leadership style is situational, and even though people tended to dislike the way Jobs lead, he ran the organization into its most successful and profitable years, saving it from demise. The most relevant paradigm in my opinion is the integrative paradigm. Since it incorporates portions from the other three theories, I believe that it can be used to describe the charismatic, passion filled leadership qualities that Jobs possessed. He was able to inspire his employees and everyone was always enthusiastic once the levels of productivity they had put in resulted in a noteworthy product everyone will love.

6. Since the passing of Steve Jobs, this seems to be a question that is on everyone’s mind, from employee to shareholder to customer. While it is a scary thought, something tells me that the passion and vision that Jobs was able to give to the organization in the last decade he worked their contributed to the current mentality of a lot of the current top level managers still working there. It has become an atmosphere at Apple that they should only create products that would be worthy of a Jobs stamp of approval, and I personally do not think the organizational paradigm would shift after such an influential human being has put so much effort and soul into a company as Steve has done for Apple. Apple is the leading household name for so many different technologies, they have changed the music industry forever, and have an absolutely absurd amount of cash on hand to fund whatever types of projects they need to be sure they are constantly on top of the industry. While the technology industry is one of the most fast paced changing industries with constant improvements in hardware and software, I do not see Apple falling behind to the point that they will not recover again. 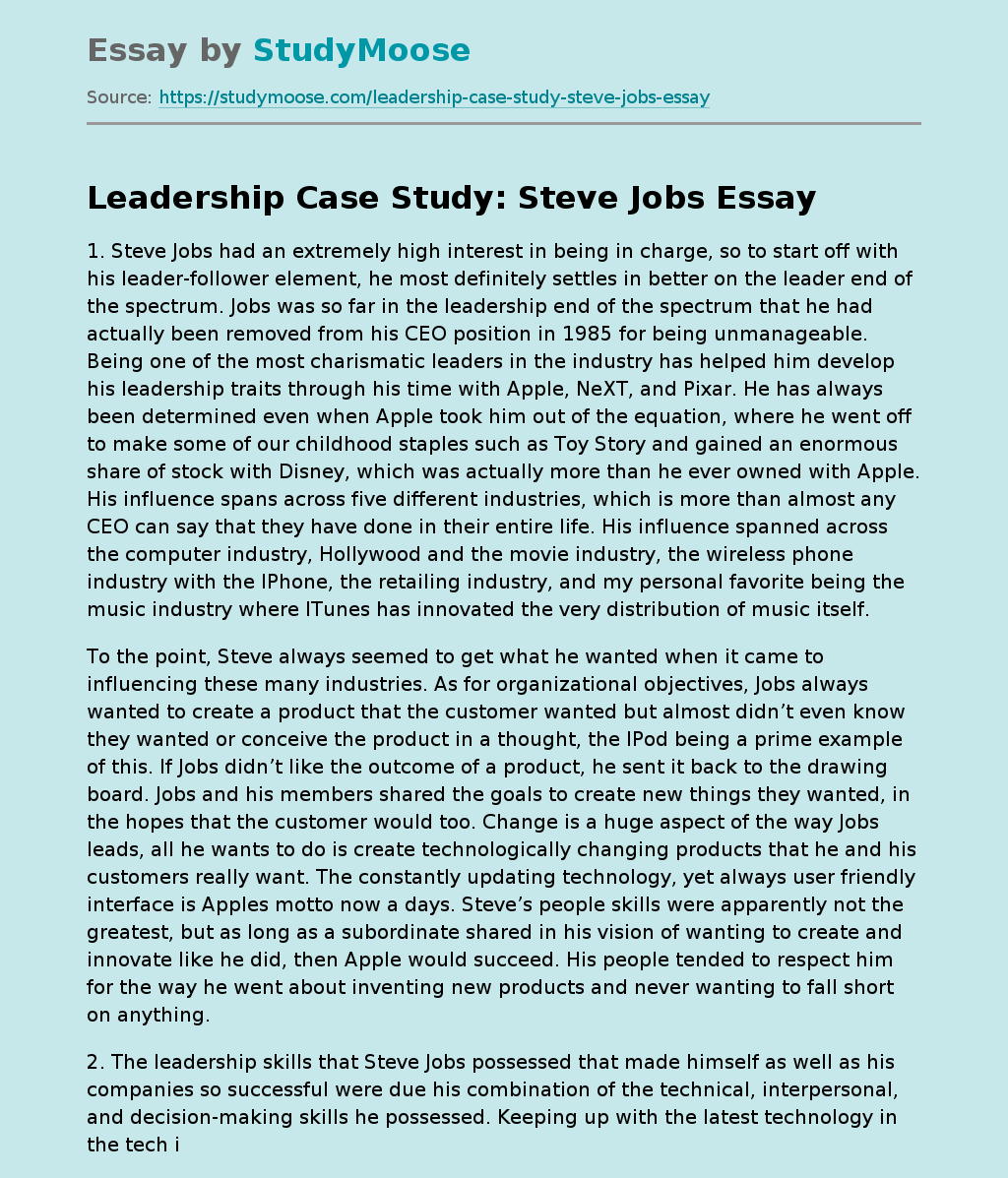