The last moments of The Crucible

Arthur Miller wrote ‘The Crucible’ to compare the injustice of America in 1950’s to the witchcraft in Salem in the 1960’s. In 1950’s people were accused of being communists, which was seen as a threat to the capitalist world of America. In Salem innocent men and women were put into jails. They were accused of witchcraft.

The only alternative for the people were to confess of trafficking with the devil even if the accusations were not true. Otherwise, their fate is to be hanged.

Don't use plagiarized sources. Get your custom essay on
“ The last moments of The Crucible ”
Get custom paper
NEW! smart matching with writer

This act was due to the fact that people in Salem believed every witch should be hanged according to the Bible. Many innocent lives were destroyed in vain when the true culprits, a group of girls were out there in Salem making false accusations on people. Arthur Millers’ major themes of the play are love, judgment, dishonesty and pride.

The girls were probably projecting their own guilt on the innocent. John and Elizabeth Proctor are such two innocent people in this play and in the Act 3, they experience the horror of being named and accused of witchcraft. Elizabeth was accused by their former maid Abigail Williams. John and Elizabeth are arrested and their children are looked after by friends while John is tested in a life-threatening ordeal, will he accept his own death or make a false confession by betraying his conscience at the end.

In the final moments of the play, Elizabeth ‘promises nothing’ when Danforth asks Elizabeth to persuade her husband to ‘plead for his confession’ and the audience’s tension rises as John enters ‘with a sound, the sibilance of dragging feet on stone’.

‘He is another man, bearded, filthy, his eyes misty’. The audience reacts with sorrow as they see John imprisoned for months for the accusations of witchcraft. The audience’s tension is maintained as the couple stand silently in a ‘spinning world of sorrow’. The audience feels great tension when they stand ‘in a world beyond sorrow’ and a ‘strange soft sound’ comes from his throat, she covers his hand with hers and ‘then, weak, he sits’ as they cannot shout out their love as for the events that had been happened to them. They waited uncertainly, how to respond to each other.

The number of pauses between the dialogues creates anxiety for the audience, wanting to know what they will speak next as for the short time they are left with. Tension of the audience grows as John ‘looks at her incredulously when he hears of Gile’s death as he had heard nothing from where he had been kept. The stage directions add to the dramatic tension when he repeats ‘more weight’, numbed of hearing how Giles was killed. Here the audience’s tension increases wanting to know whether John will confess or choose to become a martyr like Giles, his friend did.

John ‘with great force of will’, but not quite looking at her as though he was ashamed says ‘I have been thinking I would confess to them Elizabeth’. The audience feels great emotion as ‘she shows nothing’ and she only says ‘I cannot judge you John’. The audience’s tension increases as they expect her to persuade him to confess. But she with a slight pause says ‘I want you living John. That’s sure’.

The audience’s tension is maintained when John struggles with his conscience that he cannot break his honesty and it is hard ‘to give a lie to dogs’. Then the tension is released, after a pause, he for the first time turns directly to her and asks for forgiveness from her for as he has become an adulterer, earlier in the play.

The last moments of The Crucible. (2020, Jun 02). Retrieved from https://studymoose.com/last-moments-crucible-7181-new-essay 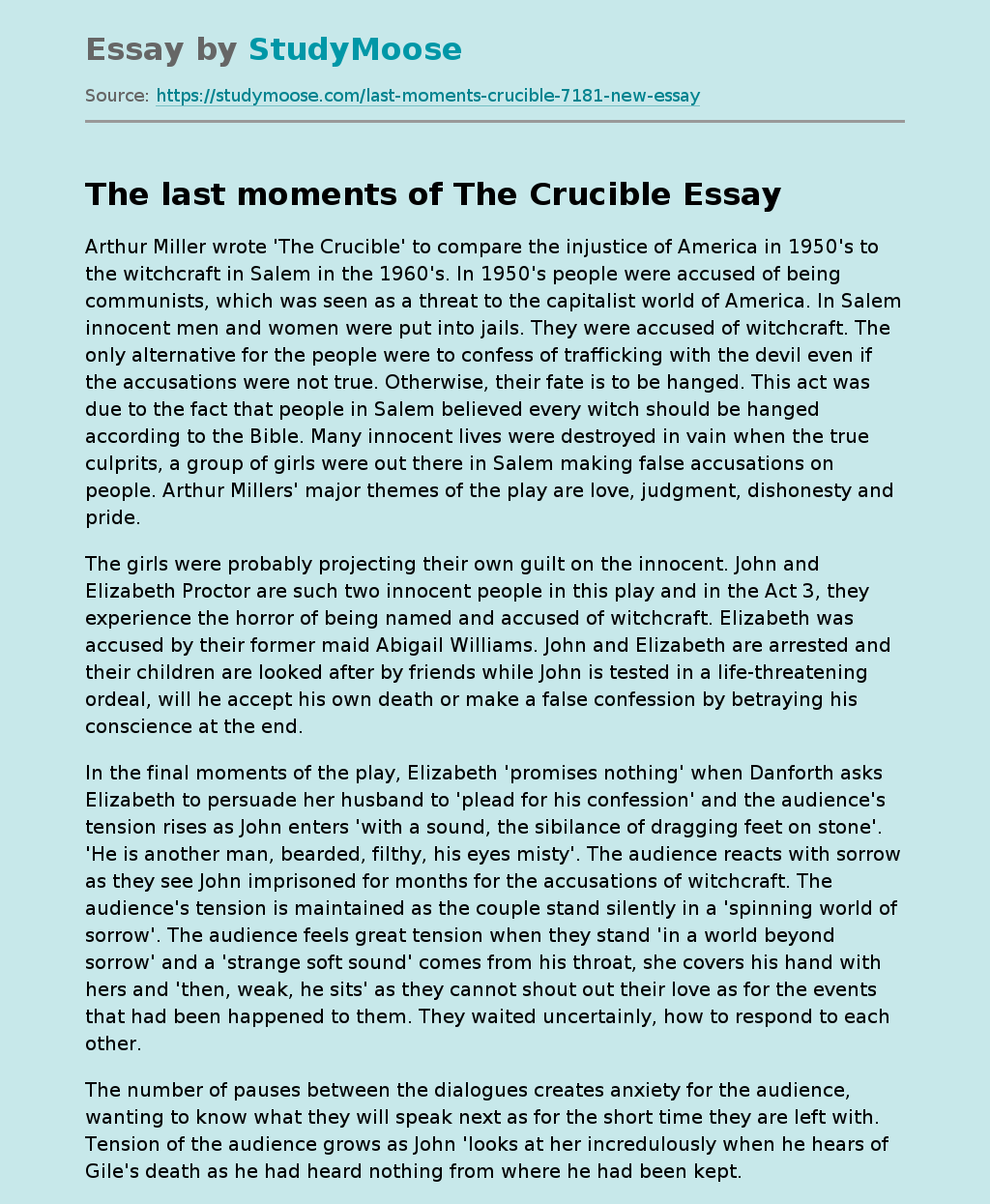