Las Siete Partidas was a work commissioned by King Alfonso X in 1265. It introduced law codes which only took effect in Castile a century later. These law codes, which were based on earlier feudal, civil, and canon laws, were hostile to Jews. The conditions placed on Muslim Moors, however, were even more severe than those placed on the Jews (Muslims, for instance, were prohibited from having mosques. ) The focus of this essay will be on excerpts taken from Las Siete Partidas which deal primarily with the Jewish people.

Don't use plagiarized sources. Get your custom essay on
“ Las Siete Partidas: Laws on Jews, 1265 ”
Get custom paper
NEW! smart matching with writer

The “Laws on Jews” were an attempt to manage the costs and benefits of living with a Jewish minority.

Laws which served to control the spread of the Jewish minority forbid miscegenation: “Jews who live with Christian women…shall be put to death. ” Jews were also forbidden from proselytizing: “Moreover, a Jew should be very careful to avoid preaching to, or converting any Christian…. ” Socializing with Jews was prohibited: “…we forbid any Christian…to invite a Jew or Jewish…to eat or drink together….

” Jews were prohibited from owning slaves or oppressing Christians. Some laws were based on false allegations which claimed that Jews were engaging in human sacrifice (blood libel).

Blaming Jews for Christ’s crucifixion (deicide) led to further anti-Semitism. Some of the laws were designed to protect Jews. Jews were protected on Saturday (Sabbath) as well as in their place of worship (synagogue. ) Jews were prohibited from leaving their homes on Good Friday (days on which Christians were hostile towards Jews.

) Some laws served not only to protect Jews, but were degrading as well. For instance, Jews had to wear a Jewish badge to distinguish them in public: “…in order to avoid the offenses and evils…all Jews…shall bear some distinguishing mark….

” A law which requires Jews to identify themselves with a badge implies that Jews and Christians were not so different racially, but separate peoples in terms of their history, culture, and language. The Christian community in Castile, in order to maintain power over their population, introduced laws which would ensure that the Jewish minority would not grow. These laws were at times degrading and hostile towards Jews. However, there were attempts to protect and appease Christian hostility towards Jews.

It would prove to be a challenge to maintain a balance between denigrating the Jewish community – in an attempt to check its growth – and making use of its influence and power (King Alfonso made use of Jewish doctors and bankers. ) It would not be unfair to ask whether the conflicting relationship between Christians and Jews was due to the fact that the Jews were in fact a nation within a Christian nation. Moreover, if the Christian community in Castile recognized the Jewish people to be a nation, then they may have felt threatened by the possibility of the reestablishment of a Jewish state. 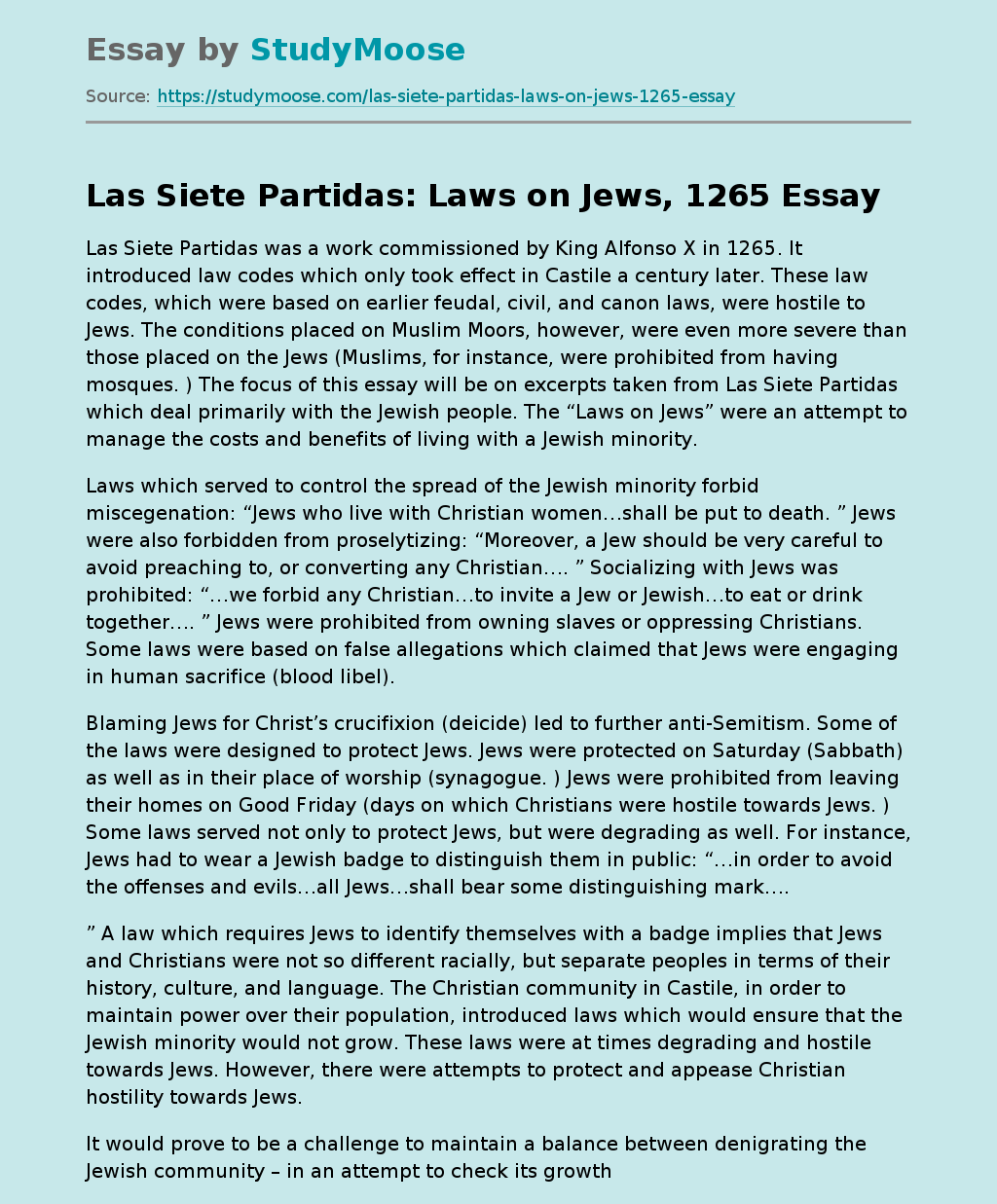