Lars and the Real Girls

In the film Lars and the real girl by Craig Gillespie, an important character developed is Lars. Lars lives in a tight knit community based in a small American town. Lars has a fear of human contact which results in him suffering form a delusional disorder where he falls I love with, Bianca, a life sized ‘real’ doll. Through his relationship with Bianca he is provided with unconditional love and lack of criticism he desires. This inurn helps him gain confidence he requires to engage in his community and begin to relate to those around him.

Don't use plagiarized sources. Get your custom essay on
“ Lars and the Real Girls ”
Get custom paper
NEW! smart matching with writer

Gillespie shows the development Lars undergoes through the techniques setting, costume and dialogue.

In the opening-establishing scene we are introduced to images of barren landscapes, harsh white lighting and a thick layer of snow that covers anything vibrant. The ‘cold’, ‘still’ environment provokes a disconsolate mood, which parallels to our first introduction of Lars. We are introduced to Lars through a frosted girded window. The window is symbolic to Lars’s initial mental state, as he appears emotionally frozen.

The squares grids on the window enforce a restriction between him and the audience. The dark lighting behind him contrast with the white painted grids on the window, making him look imprisoned this reinforces the literal barriers he puts up from the rest of the community. His facial expression is monotonous which harmonizes with the setting. The barriers put between the audience and Lars is a way Gillespie.

Costume is another technique Gillespie uses to establish Lars personality.

in the opening scene Lars is introduced wearing excessive layers of winter jumpers, long trousers, and chunky scarfs. This reinforces the visual barriers Lars puts up due to his fear of literal and emotional human contact. The clothing is all natural tones, the absence of color adds to the ominous feeling

Gillespie uses minimal dialogue to portray Lars’s character as socially recluse. Limited dialogue helps the viewer to understand Lars is introverted because he is afraid to socially interact with other people. The lack of dialogue also helps us appreciate the dialogue he does say, “I thought the snow was over. Knowing that it has been carefully selected by the director to contribute or develop and important idea. Often Lars character substitutes words by awkwardly squinting his eyes shut. This happens when Lars is uncomfortable in the social situation. The audience is manipulated to feel sympathetic towards him. Its important that this sympathetic connection is made early on, so the audience is engaged in his development.

Upon the arrival of Bianca, we see a false thaw in the weather. As Lars introduce Bianca to Karin (Lars’s sister in law) and Gus(Lars’s brother) the false thaw signifies Lars begging to open himself up to Karin and Gus through the arrival of Bianca. The deceptive thaw, a few patches grass and a glimmer of sunlight, symbolizes Lars emotional retrieval. Through the unconditional love and lack of criticism he desires Bianca provides him, Lars begins to interact with the community having Bianca close by as a protective armor. However it is only false thaw, as Bianca is only plastic and will never be able to provide him with true fulfillment. However the way the community plays along with Bianca gives lars the chance to find his own identity in his own time and in his own way. As an audience we see the immense healing power a community can have if the come together to support an individual.

Costume further shows Lars development, as Lars shows love interest for Margo (Lars colleague). This shows a huge transition in his character as it shows he has gained the confidence to obtain a mature healthy relationship with a real person. Costume enhances this conversion, as he isn’t wearing as many layers, showing he is more comfortable around her. By eliminating the armor like clothing, we see he is emotionally ready to let people close to him. Lars is also starting to wear colors, pink in particular, which is the color we associate Margo with because she always dresses in it. This shows the positive influence Margo has on Lars. Wearing warm colors like pink purposely triggers positive connotations to the viewer, which makes his development more obvious and contrasts with the ominous mood at the beginning.

Through therapy session Lars confesses finally ready to let Bianca go because he has developed into a mature man who has a place in society and no longer needs Bianca to provide him with a armor like strong front when socially interacting. He realizes his love for Bianca will never be able to provide him with true fulfillment. He announces the death of Bianca to Karin and Gus and the community hold a funeral in respect of Bianca but also to morn the attachment the made with her through Lars. The compassion on love of the community at Bianca’s funeral shows Lars he is not alone, and has the support of those around him. Dialogue Shows us his full development when he says to Margo after the funeral, “do you want to go for a walk?” this is the first time Lars is initiating human interaction.

In the film Lars and the real girl by Craig Gillespie, costume, setting and dialogue help to develop the protagonist Lars. We originally see Lars is introverted, withdrawn and a social recluse, but through the unconditional love and lack of criticism provided by Bianca, a life sized ‘real’ doll, we see him grow into a mature man who has found his place in society. The support the community shows, offers Lars the encouragement needed to develop healthier relationships with real people. Gillespie challenges the audience to accept those around us who may not fit in. He makes it our job to not give up on people, even when they have given up on themselves. As an audience we come to appreciate the healing power that one community can have.

Lars and the Real Girls. (2017, Feb 08). Retrieved from https://studymoose.com/lars-and-the-real-girls-essay 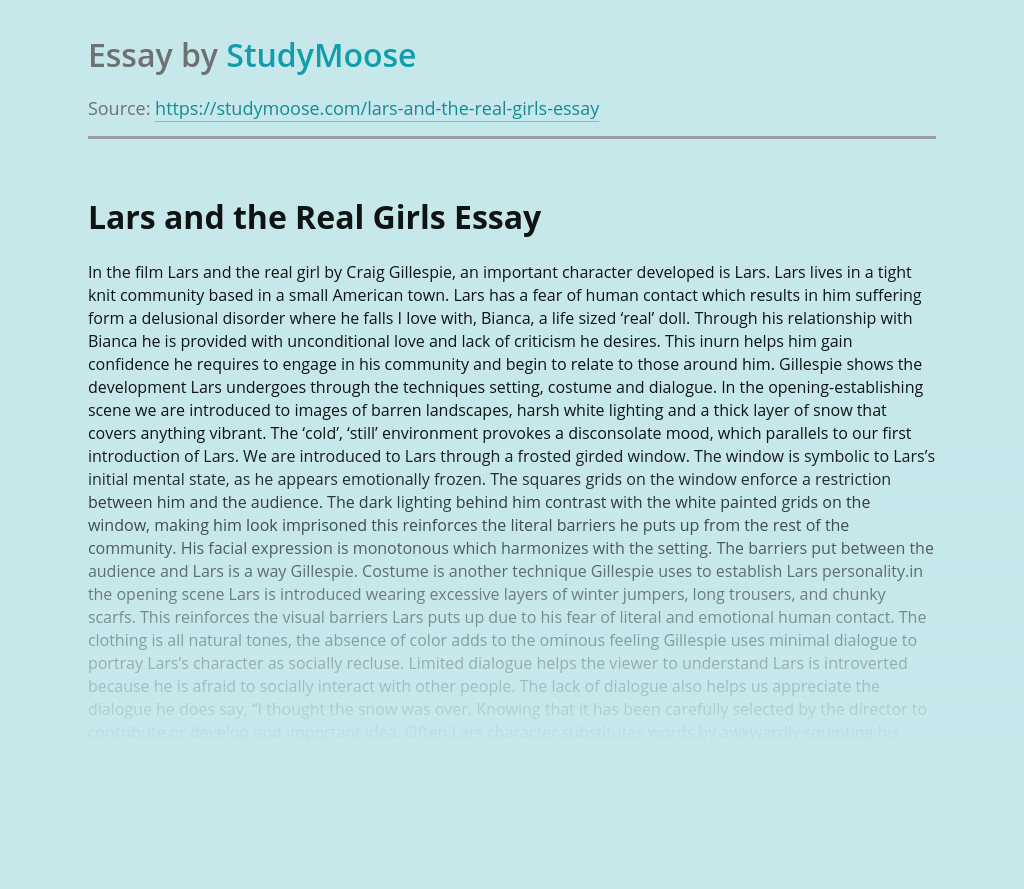