How was the leader ‘vision’ implemented

Google founded in 1998 with Sergey Brin. Google soon found itself at the top of search engines and from a small, garage- based company had transformed into a global giant. Google now is a synonym of world’s no1 ideal (New York Post, 2011) and employs 53546 people owns numerous offices worldwide. Some vision points for Google and future technologies that Larry pages laying out from Google’s developer conference in San Francisco 2011.

“Technology should do the hard work so people can do the things that make them the happiest in life.

” “We’re really only at 1% of what’s possible, and maybe even less than that…we’re still moving slow.” “We should be building great things that don’t exist.” “Being negative is not how we make progress.”

“I’m sure people in the future will think were just as crazy as we think people in the past were.” “I think today we’re still just scratching the surface of what’s possible.

That’s why I’m so excited Google is working on the platforms supporting all your innovations.”

Google search engine of creativity stems from one of his dream: He was trying to download the entire Internet to your computer, but also to maintain the entire link. “When someone did crazy to this extent, you will face smaller competitions.” He said.

Larry is doing the reorganization without a whisper and streamlining of middle managers in order to eliminate bureaucracy.

Page hopes to develop a more responsive and more flexible approach to management in Google, which would easy to make a judgment when making a decision.

Understand the importance of “little tricks”

Google always improving their products such as Gmail, search engines and android products to take their customers have good image to Google.

Larry pages thinks unremitting is a successful method to achieve the goals. If people not keep faith the thing they want to do, they may not achieve their objective.

Larry and Sergey reason why the search engine named “Google” is actually taken from the mathematical term “googol”, meaning one followed by 100 zeros. In 1998, Sun Microsystems (Sun) co-founder Andy Bechtolsheim wrote a check for $ 100,000 U.S. dollars, the company does not yet exist to open Google Inc., Google Inc. Was born

Summary and timeline of program implementation

This is a browser plug-in can be carried out without entering the Google home search. Released the first mobile device with an open platform Android, August 19 in the United States Wall Street initial public offering of Class.

Officially acquired AdMob, which is a mobile service multimedia advertising company. Announced the co-founder Larry Page in April 2011 will be the company’s chief executive , Eric Schmidt will serve as executive chairman. 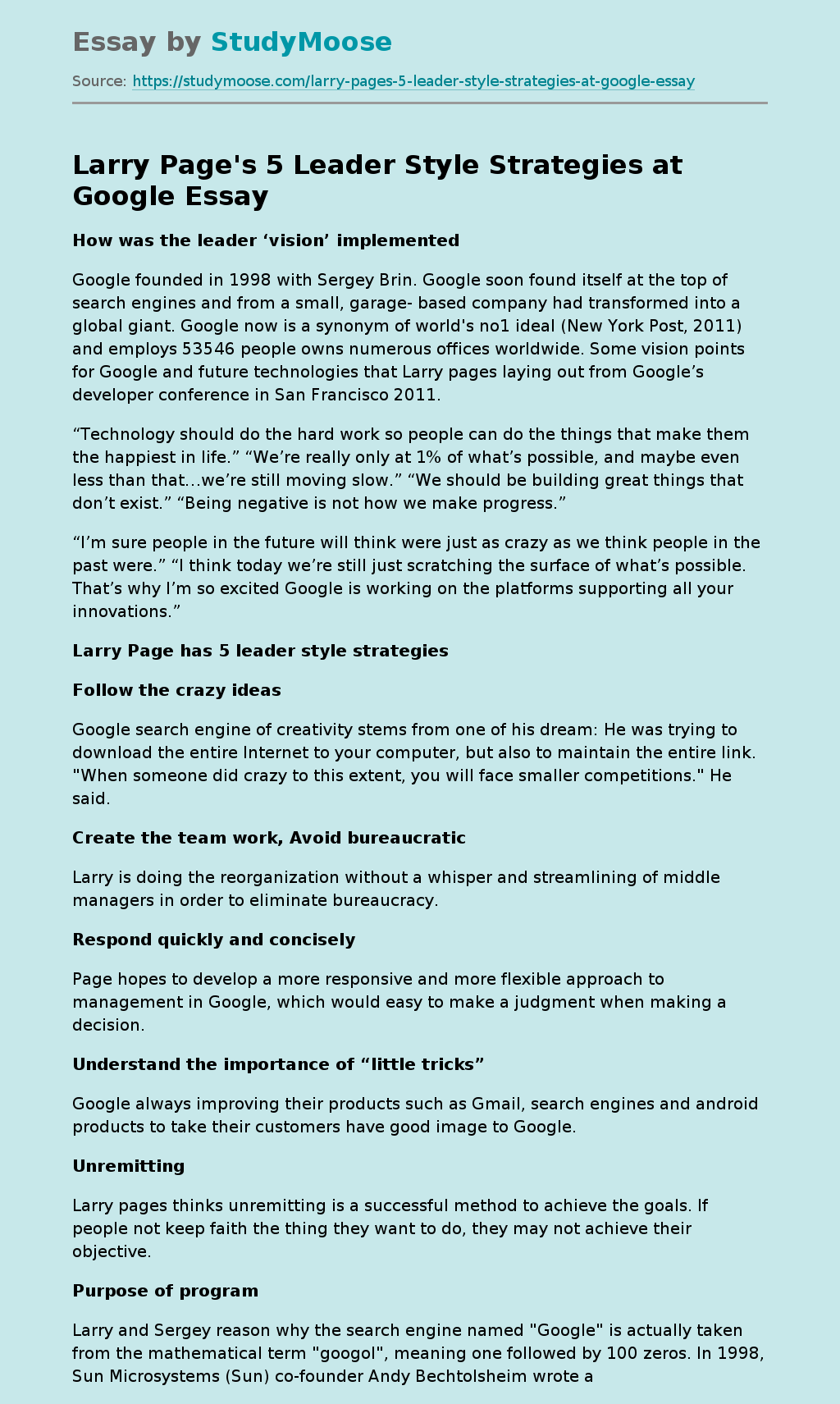