Language as a badge of identity

Language is used every day to communicate with one another but beneath that conversation lies another message. The speaker’s use of language gives listeners insight as to who they are, like a badge of identity on their chest. Australian English’s unique phonology and lexicon is recognised globally and distinguishes it from other accents, giving the speaker a clear national identity. Ethno-lects are spoken by a specific group of people who have the same cultural background. These “ethno-lects” not only help express an individual’s identity and separate themselves from the rest, but also assist in bringing together speakers from similar backgrounds; much like a football jersey.

Don't use plagiarized sources. Get your custom essay on
“ Language as a badge of identity ”
Get custom paper
NEW! smart matching with writer

Text speak is constantly evolving as lexemes are taking on new changes. Many teenagers and younger children have begun to adopt this in an attempt to identify with others and fit in. Through language, we can get a glimpse of a person’s identity but they can use the same medium to change that identity as well.

Australian English is unlike other Englishes in many different aspects, especially phonetically morphologically and semantically. Phonology plays a great role in national identity as it is what creates different accents. The broad, ocker Australian accent with its trademark nasal, flattened vowels is one of the key elements of Australian linguistics that sets it apart from the rest of the world. Diphthongs in lexemes like “high” are more rounded, resulting in /hoɪ/. Phonetic features such as these are easily identified as Australian. Slang is another feature of Australian English that sets it apart from others.

Replacing suffixes with vowels is a good example of this. “Afternoon” becomes “arvo”, names like “Barry” becomes “Bazza” and by replacing the last element with an ‘-o’, the adjective “povo” has undergone a word class shift from the noun “poverty”. Popular culture has also influenced Australian English, with ABC television series J’amie, Private School girl introducing a semantic and word class shift of ‘quiche’ (a noun meaning a savoury open-faced pastry) to an adjective to describe an attractive individual. Australia’s linguistic innovation displays individuality and opposes claims that slang is borrowed from America. Australian English shows both national pride and identity.

Teenagers are at the age when they are starting to establish their identity. Neologisms are created by teenagers to claim a different identity from that of children or adults. As adults become more familiar with these lexemes and their use, teenagers abandon them or alter the semantics and use to maintain a linguistic barrier. A good example of this is the well-known acronym “lol” which stands for Laugh Out Loud. As more adults become aware of this lexical item and start to include it in their daily texts, teenagers have brought it into speech as an exclamatory and discourse particle. The case of the letters now also alters the semantics; when typed in lower-case, “lol” is sarcastic whilst “LOL” in capital letters shows true amusement. It is evident that this constant changing of terms by teenagers is a sign of rebellion and an effort to keep a linguistic barrier between themselves and adults, thus maintaining a separate identity. The malleability of the lexicon is taken advantage of by teenagers to form a linguistic barrier between themselves and unwanted people such as adults and other teenagers who don’t belong in their group. Thus, a unique identity is maintained.

While teenagers are constantly seeking to separate themselves from children and adults, they are also pressured to conform to the teenage group. Acronyms such as “idek” (I don’t even know) and “tbh” (to be honest) are now frequently used lexicon in a teenager’s text vocabulary due to connotations of “cool” and “modern” being associated with them. Similarly, whatever was once popular amongst a teenager’s discourse. In time, it was shortened to “whatevs” and this trend spread quickly amongst them as a result of peer pressure and the need to be fashionable. Professor Steven Pinker suggests the reason for this is because “the coolest kids decide to talk that way and it spreads like wildfire”. Individuals who wish to associate with others who sit higher on the “social pyramid” will pick up their speech habits and wear it as a new badge of identity. Having their own exclusive vocabulary allows teenagers to relate to each other and share the same identity, giving them a sense of belonging to a group.

Language can be worn as a badge of identity, giving speakers national, interpersonal and intrapersonal identity. The phonology of Australian English gives the speaker a distinct accent and, paired along with its unique slang, makes it identifiable across the globe. In order to separate themselves from adults and children, teenagers build a linguistic barrier by creating neologisms and maintaining that barrier by constantly altering lexicon to avoid adults becoming too familiar with them. On the other hand, inside the teenage group is a drive to conform and use similar language in an attempt to fit in with peers and to have a sense of belonging. Language is used as a badge of identity regardless of what that identity is.

Language as a badge of identity. (2016, Feb 27). Retrieved from http://studymoose.com/language-as-a-badge-of-identity-essay 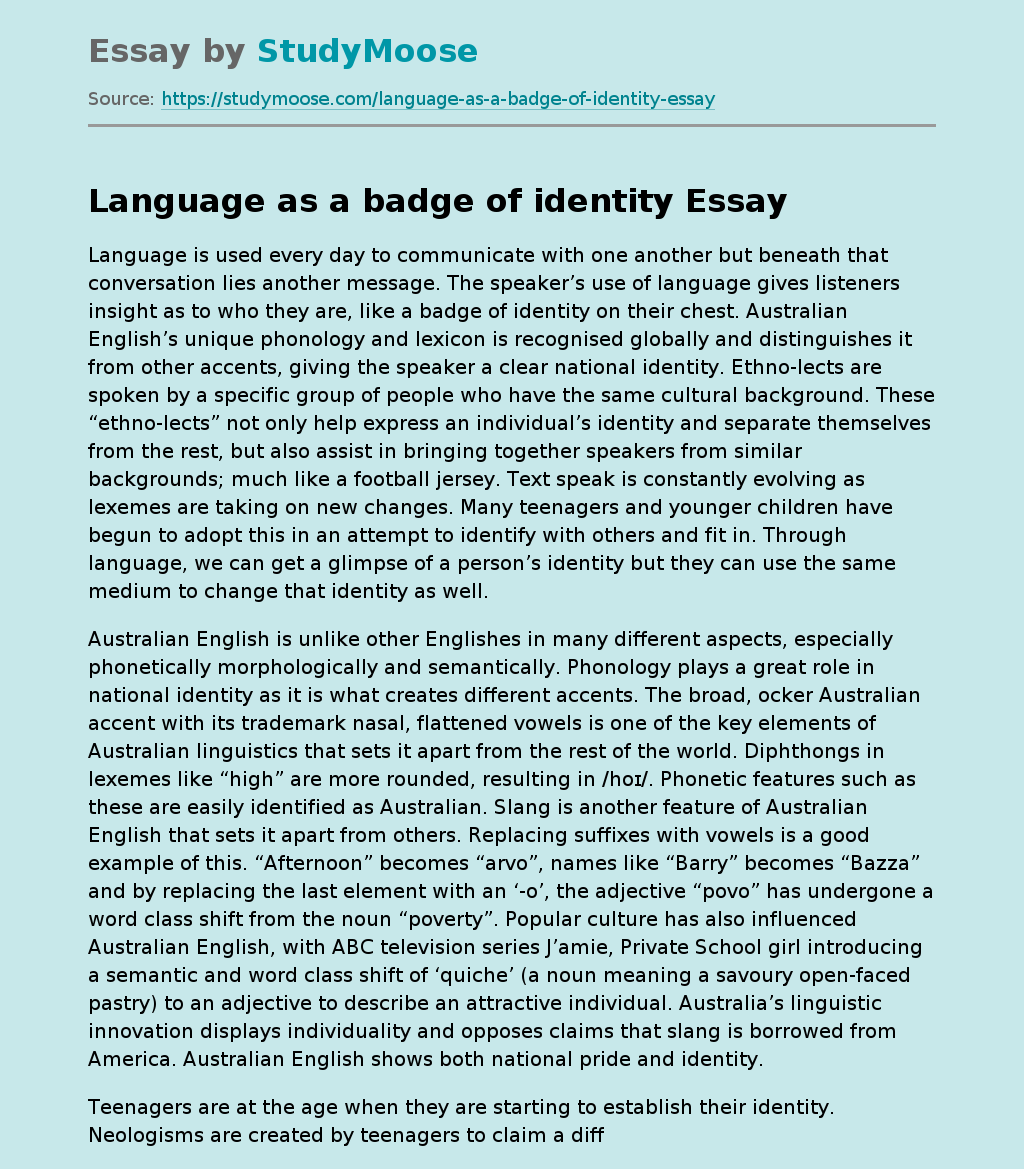