An Explication of Langston Hughes’ “Mother to Son” Langston Hughes once stated in his own words that his whole purpose for writing was, “to explain and illuminate the Negro condition in America.” In the poem “Mother to Son”, he denotes his belief on racism in America. In “Mother to Son”, a mother is giving advice to her son about life from her perspective and experiences. She wants her son to keep striving on what he believes and to have a more prosperous life than what she had.

Don't use plagiarized sources.
Get Your Custom Essay on Langston Hughes’ “Mother To Son” Just from $13,9/Page

Langston Hughes was born in Joplin, Missouri in 1902. He lived with his grandmother for most of her life but often stayed with his mother in Cleveland, Ohio. He grew up in poverty and was exposed to racism in his youth. However, he believed that things would change and his culture must press on. By 1929, he was a well know poet during the Harlem Renaissance, the growth of African-American art and literature in Harlem, New York.

He promoted the African-American culture and supported the Civil Rights Movement. Hughes used poetry to express himself and has written over sixty poems. One of them being “Mother to Son”, which expresses how the blacks must stand tall and believe in a better future.

Starting with the title, “Mother to Son”, allows the reader to trust that the poem is going to be about a mother and a son. Just by reading the title, the reader may wonder what type of poem this is going to be. It shows a sense of leadership because a son sees his mother as an authoritative figure, someone who he can trust, someone who he has a bond with. Mothers are usually a figure who nurtures and molds their children into the right path. This gives the reader a hint that the poem is a poem were, the mother, in some way or another is molding or guiding the son into the right path.

In the very first line, “Well, son, I’ll tell you:” gives the reader a good idea in which direction the poem is taking. At this point, the reader can trust that the mother is going to give some kind of advice as mothers frequently do. As the reader moves on to the second line, “Life for me ain’t been no crystal stair,” Langston creates imagery for the reader by using a crystal stair as a metaphor to symbolize the mother’s life in contrast to the crystal stair. Crystal has connotations of beauty and visual smoothness. It is also a valuable piece of stone that only the wealthy could purchase in high volume such as that of a crystal stair.

The crystal stair is very important to the body of the poem. Without this metaphor, the poem probably would not have the same effect on how the reader interprets it. Moving on to the third sentence, “Its had tacks in it, and splinters, and boards torn up, and places with no carpet on the floor-Bare.” The tacks and splinters could represent pain or scars left from the mother’s past. The boards that were torn up could represent imperfection; a struggle or permanent loses and voids in her life. “No carpet on the floor-Bare” could mean that the mother has nothing left to show for her life. Her life as a youth could have been stripped from her through slavery. So she wants her son to make something of himself despite the criticism and racism he is challenged with.

The poem doesn’t state specifically to the reader where the setting takes place but there are two hints Hughes gives that leads the reader into the assumption that the South is a primary focus. First, the poem was written in 1922, which was a time of the Harlem Renaissance. Second, the mother is speaking the words of the poem in a Negro dialect, which forces the reader to assume she’s black. With these two facts, the reader can reasonably come to the conclusion that the mother has probably dealt with the racism and prejudges from the white culture.

The 1920’s were a time of struggle for many blacks and Negro rights since slavery was abolished in 1865 by the 13th Amendment. By reading the history of the poet, Langston Hughes, the reader has a general idea that his own mother could have been a slave or had grown up during the time that slavery was being abolished and the 13th, 14th, and 15th Amendments came into effect. This was also during a time when Congress had passed several laws to protect Negroes’ civil rights. In contrast, many whites disregarded the newly won rights of Negroes. (World Book Encyclopedia. Civil Rights. Field Enterprises Educational Corporation. Chicago. 1977. P.468)

Like many other Lyrics, “Mother to Son”, is expressing the thoughts and feelings of a single speaker and is written in first person point of view. In the very first line, “Well, son, I’ll tell you”, Hughes demonstrates to the reader that this is going to be a first person point of view. Readers can see that the mother is the central character in this poem because the reader is focused on her next word as she describes her view of life. The mother speaks her thoughts and feelings for the entirety of the poem but the boy doesn’t speak at all. This is called a dramatic monologue.

Langston’s attitude toward life in “Mother to Son” is slightly unpleasant but solemn and trustworthy. The reader gains a sense of sympathy for the mother as she tells her son about her misfortunes from the past.

In “Mother to Son”, a mother is urging her son to keep striving with assurance to have a more prosperous life than she had.

Langston Hughes was born in Joplin, Missouri in 1902. He was a well-known poet during the Harlem Renaissance. He believed strongly in his culture and he had faith that things would change for the better.

The title itself gives the reader a sense of insight on what the poem is going to be about as it clearly uses “Mother”, an authoritative figure in which a son would trust and look up to for guidance. On the other hand, a mother’s own instinct is to her child into the right path. Langston clearly demonstrates this in this piece of poetry. Langston also uses imagery for the reader by using the crystal stair as a metaphor.

The setting is not specifically stated but Langston has granted a couple of clues for which the reader can rely. The date the poem was written and the word choices he uses lets the reader know that the setting is probably in the South.

Langston’s background gives the reader the idea that he may have reflected on his mother’s past and the events that follows slavery abolishment in 1865 when he began writing, “Mother to Son.” This poem was written as a Lyric. Like many other lyrics, it was written in first person point of view and the poet used a dramatic monologue when the mother speaks of her thoughts and feelings, whereas, the boy doesn’t speak at all.

Although, Langston shows a slightly unpleasant attitude in his tone, he is solemn and trustworthy. The reader gains a sense of sympathy for the character of the mother 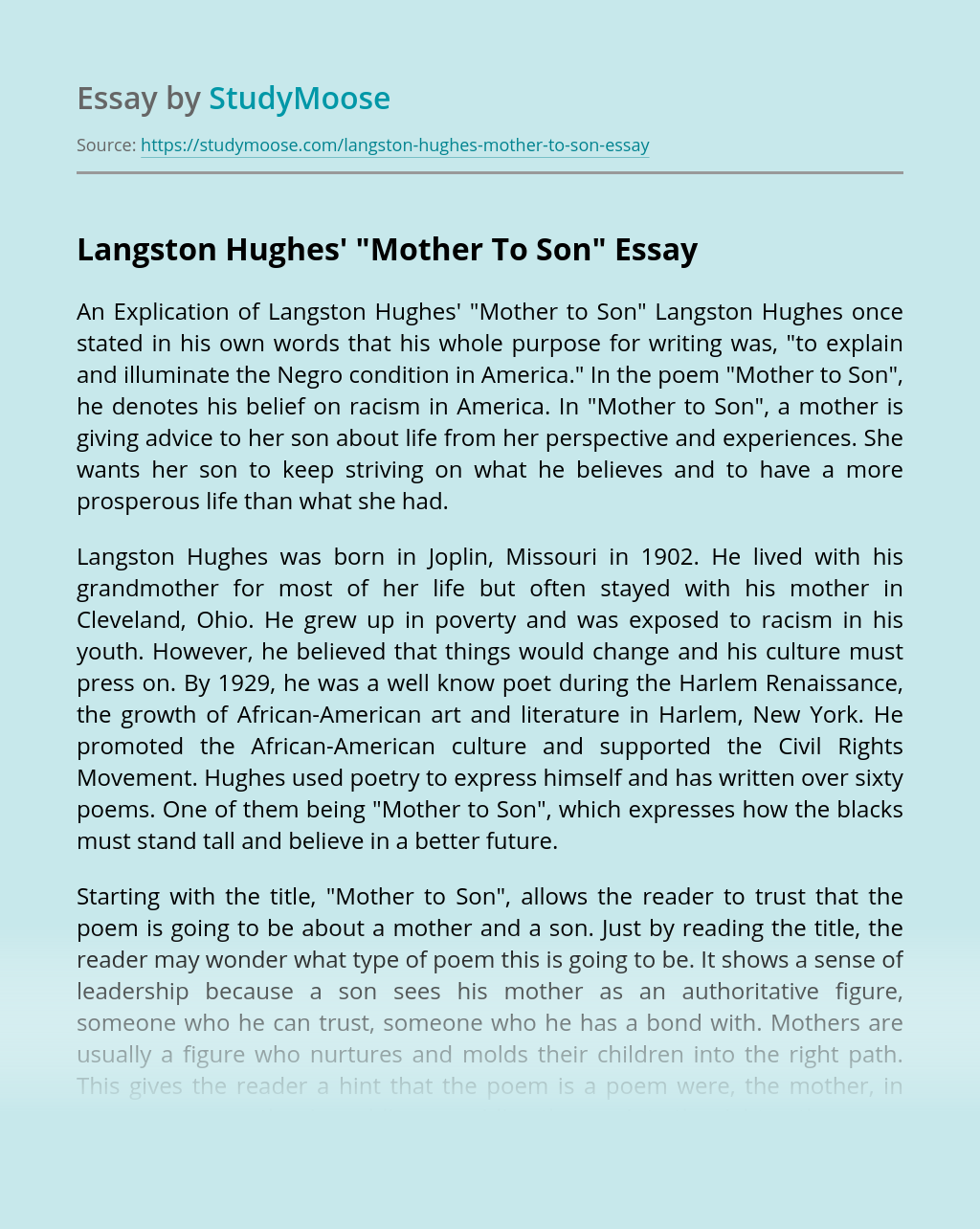 1. Define business ethics. Who determines whether a business activity is ethical? Is unethical conduct always illegal?Business ethics is the principles that determine the acceptable conduct in the business workplace. Customers, competitors, government regulators, interest groups, and the public determine whether a business activity is ethical. No, not all conduct is always illegal. 2. Distinguish...

Andrew Carnegie once said, “No man can become rich without enriching others.” The U.S. was between wars, inventions, technology, and also successful movements with one another. As business offered the best chances, certain people became well known, due to what they created. For example, Thomas Edison; who invented the light bulb had become “famous” along...

Over the past few decades, with the development of contract law, more and more people has paid attention to the exclusion clauses contained in a document which is signed by the parties. Many contracting parties use this technique to avoid liability for breach of contract. In this essay, exclusion clauses can be defined as a...

The senses are fundamental: hearing, taste, odor, sight, and touch. These are the offered senses that are apart of every living animal in the world. People have constantly questioned the presence of the sixth sense. A 6th sense is a power of perception beyond the 5 senses. Numerous have actually theorized that the ability of...