Lamb to the Slaughter - Study of Mary Maloney

I am going to explain within this essay how I think Mary Maloney’s character changes in the story Lamb to the Slaughter by Roald Dahl.

When the story opens Mary is a content, loving and devoted wife and is six months pregnant and happy to be so. “Now and again she would g lance up at the clock, but without anxiety, merely to please herself with the thought that each minute gone by made it nearer the time when he would come.

Don't use plagiarized sources. Get your custom essay on
“ Lamb to the Slaughter – Study of Mary Maloney ”
Get custom paper
NEW! smart matching with writer

” The statement “without anxiety” demonstrates her contentment. The statement “please herself” to “when he would come” demonstrates the love and devotion she has as she is eagerly awaiting the return of her husband from work. It states “The drop of the head as she bent over her sewing was curiously tranquil. Her skin – for this was her six month with child – had acquired a wonderful translucent quality”. The use of the word “tranquil” and “wonderful” portray she was thriving on her pregnancy and had no anxieties.

It later states “For her, this was always a blissful time of day”. The use of “blissful” shows demonstrates the full extent of her contentment.

On the arrival of her husband home Mary Maloney begins to detect something is wrong with her husband and a nervous anxiousness starts to appear in her. It states “he did an unusual thing. He lifted his glass and drained it in one swallow”. This was setting the scene that this was not a normal evening and indicating “drained it” introduced negative connotations.

The statements “she heard the ice cubes falling back against the bottom of the empty glass” and “she noticed the new drink was dark amber” and “she could see little oily swirls in the liquid because it was so strong” shows she was becoming fixated on the manner in which he was drinking the whisky. This fixation was used by the story teller in combination with her repeated attempts to be helpful and appease in statements such as “’I’ll get it!’ she cried, jumping up.” and “‘Darling, shall I get your slippers?’ ” and also with “’But, darling, you must eat!’” to build up a picture of increasing uneasiness in her. The writing style of using of exclamation marks and italicised “must” emphasised the anxiety.

On her husband’s announcement of his news Mary Maloney went into shock and denial. The statement “dazed horror” demonstrated this but also “as he went further and further way from her with each word” emphasised she had begun to detach from her current reality and to hope it was all a mistake “Maybe, if she went about her business and acted as though she hadn’t been listening, then later, when she sort of woke up again, she might find none of it had ever happened.” demonstrates this further. The statement “She couldn’t feel anything at all – except a slight nausea and a desire to vomit” demonstrates the extent of her emotional distress as it emphasised her body had been physically affected by the news.

After she kills her husband she is jolted out of shock by the sounds of her husband crashing to the floor. The statement “The violence of the crash, the noise, the small table overturning, helped bring her out of shock” demonstrates this. Her mind races to at this point to calculate how to cover up the crime but not for her own benefit but to protect her unborn child. This is shown in the statements “how clear her mind became all of a sudden. She began thinking very fast.”, “It made no difference to her. In fact it would be a relief”, “what about the child” and “she ran upstairs to the bedroom”. The fast pace being used to show still an element of distress but now more panicked than shocked, clear minded and calculating how to get away with the crime.

Mary Maloney then perseveres to overcome her panic and acts to maintain an air of normality so that she can carry out believably her plan to cover up her crime. The statement “That was better. Both the smile and the voice were coming out better now. She rehearsed it several times more“. This shows the struggle to speak normally as she needed to rehears it. In the shop the statement “’Hullo Sam,’ she said brightly, smiling at the man behind the counter.” and “Perfect’, she said. He loves it.’”, shows she has decided to pretend that there is nothing wrong. This act of normality is further emphasised by her thoughts as she approaches her house on return from the shops stating “she happened to find anything unusual or tragic, or terrible, then naturally it would be a shock and she’d become frantic with grief and horror.”, and “Keep things absolutely natural and there’ll be no need for acting at all”. She believes by being as natural as possible she will get away with the crime.

Mary Maloney then feels the pain of loosing her husband. The passage “All the old love and longing for him welled up inside her, and she ran over to him and knelt down beside him, and began to cry her heart out. It was easy. No acting was necessary.” The words “welled up” shows her being overcome by emotion and also “to cry her heart out” being very emotive of a pouring out of her emotions.

After the momentary grief of seeing her husband dead on her return she goes back into acting out her plan to cover up the crime but calmer and yet more calculating. The statement “she fell right into Jack Noonan’s arms, weeping hysterically”, “’Is he dead?’she cried.” and “While she was talking, crying and talking”. Mary was building a picture of a a wife who was grieving. She then lures the policemen into drinking “’Would you mind giving me a drink’” “Why don’t you have one yourself, ‘she said. ‘You must be awfully tired’ “and “others came in and were persuaded to take a little nip”.

They were “uncomfortable in her presence” and when it came to eating the meat “’Please she begged. ‘Please eat it’”, and then, ”It’d be a favour to me if you’d eat it up” and “in the end they were persuaded to go into the kitchen and help themselves.” It was calculating as she was using the policeman’s discomfort at being with a grieving widow and desire to not cause her further distress to do things that they would not normally do. In this way she achieves her goal which was for them to eat the weapon, the leg of lamb. It shows her ability to manipulate the others in the situation. There is no visible remorse being demonstrated by these actions.

In the end she is pleased with her efforts to cover up the crime. The statement “And in the other room, Mary Maloney began to giggle” shows this. In the story she has turned full circle from the devoted loving wife to calculating killer pleased to have gotten off with it. The storyteller is portraying a crime of passion where someone has been wronged by their love, reacts on the spur of the moment and feels the pain of the loss but covers up the crime possibly with little guilt having been the emotionally injured party at the outset. She has justified her actions to herself for the well being of her unborn child.

Lamb to the Slaughter - Study of Mary Maloney. (2016, Jun 05). Retrieved from http://studymoose.com/lamb-to-the-slaughter-study-of-mary-maloney-essay 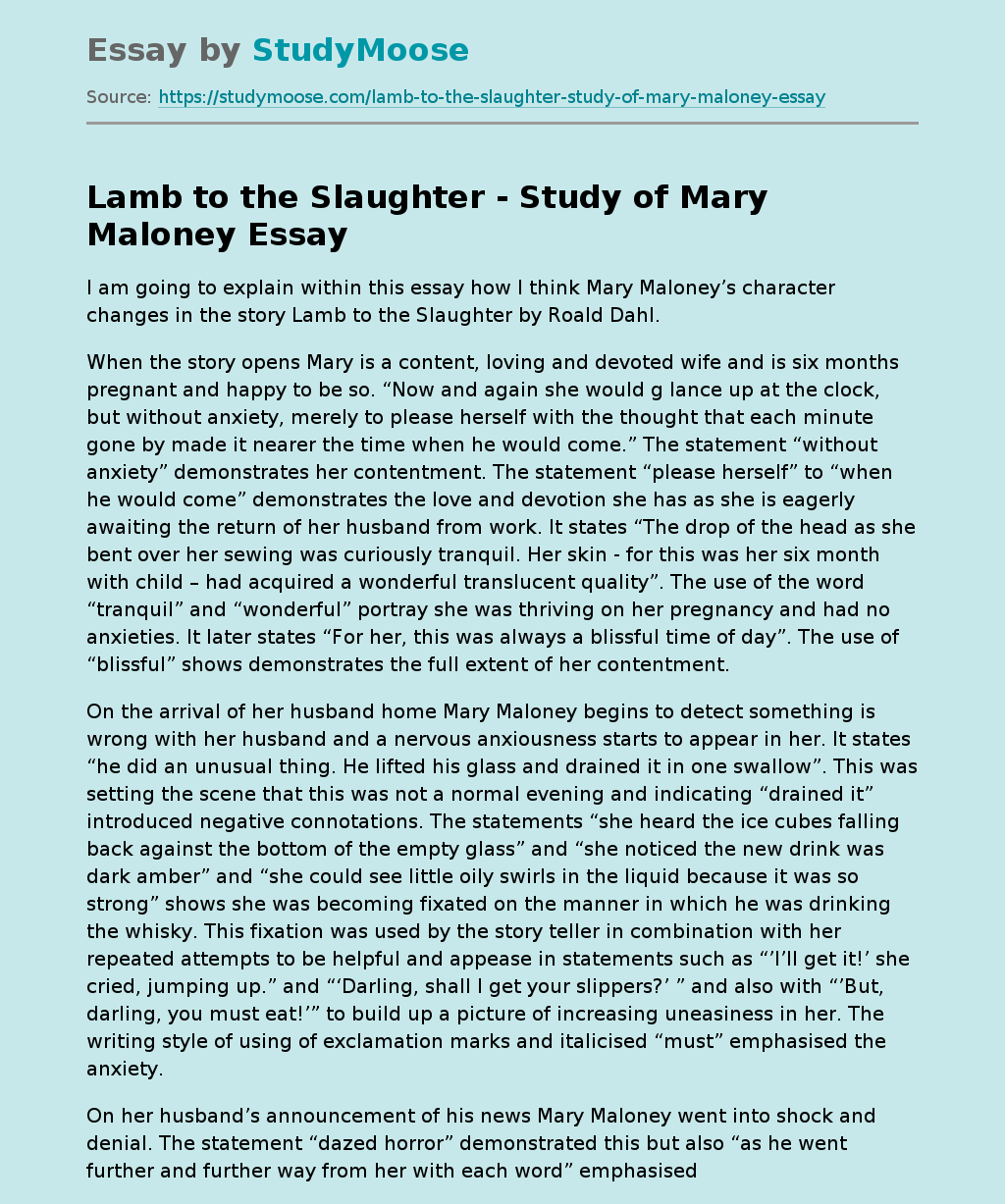