Lady Windermere's Fan is a moral play about immoral people

Oscar Wilde wrote Lady Windermere’s Fan, it was first performed in 1892 for a Victorian audience. As it is a comedy of manners, his portrayal of different characters is satirical. When he wrote this play, his ideals were to criticize the attitudes that the upper social class attached to morality through the presentation of different characters within the play. Members of Victorian society could relate to at least one of the characters, which would allow them to self-reflect and maybe change their ways.

Don't use plagiarized sources. Get your custom essay on
“ Lady Windermere’s Fan is a moral play about immoral people ”
Get custom paper
NEW! smart matching with writer

Ian Gregor states the play is concerned with “the hazards of precipitate and inflexible moral judgement.

The subtitle of the play; “A play about a good woman” immediately shows us that the play shall revolve itself around the theme of morality. This is evident in Act One where attitudes are being explored through Lady Windermere’s conversations with Lord Darlington, the Duchess of Berwick and Lord Windermere each in turn. Wilde presents different interpretations to morality through these characters’s varying social position and their particular social mores.

He is challenging the principles that distinguish between right and wrong held by this social milieu.

In Act One, Wilde exposes different issues concerning morality and how different characters view morality; this is the exposition stage within this dramatic structure. The first conversation is between Lady Windermere and Lord Darlington. We can already start to see how people in the same social milieux have different moral codes. Lady Windermere’s moral code is that of a puritanical absolutist; “she allowed of no compromise.

I allow of none”. Her puritanical ideals are “Its ideal is love. Its purification is sacrifice” and this will lead to goodness. This is ironic as it is in fact Mrs.

Erlynne who lives by these ideals but is not given a chance to explain herself. The main theme deplored in this conversation is the issue of moral codes; absolute vs. flexible, Lady Windermere obviously is of the absolutes and Lord Darlington, as we shall examine later, has a more flexible moral code. Wilde demonstrates his first criticism, her absolutist values force her to be judgmental, which is in theory wrong to do and therefore could be viewed as immoral. This narrow-minded and restricted view to life could be perceived as nai??ve and she is also young, “comes of age today”, this shows she has a lot to learn.

However Lord Darlington provides the counter-argument for this discussion. Lord Darlington is a dandy just like Oscar Wilde. A dandy is some one whose key beliefs was to stay young and beautiful, enjoy pleasure for pleasure’s sake and self-indulgence and they often made aesthetic judgments rather than moral judgments. Also, flirtation was a way of life for a dandy and this is shown in Lord Darlington’s conversation with Lady Windermere when they talk about him paying her “elaborate compliments all night” and she thinks its indecent for a man to flirt with a married woman.

This shows again Lady Windermere’s absolutist attitude that even flirtation is not tolerated. Lord Darlington is more flexible in his judgment and he thinks “life too complex a thing to be settled by these hard and fast rules” unlike Lady Windermere who believes this concept is not open to debate. In this conversation, we see them also discussing how to deal with a husband who has an affair, this is a subtle hint of what is suspected of Lord Windermere. He says should a wife “console herself” and she responds with “console herself? frowning. Lord Darlington thinks there should be the same moral rules for both men and women concerning marriage. He also believes that life is too complex to label people’s actions as simply good or evil – “it is absurd to divide people into good and evil”, on the other hand Lady Windermere thinks that there is no complexity in the question of morality, people are either good or bad. She has an unrelentless attitude to life, and this makes her seem a bit remote and slightly cold, wouldn’t this be seen as immoral or the wrong way to behave?

The second conversation is with the Duchess of Berwick who is an upper- class older woman and she is the embodiment of hypocrisy. Wilde demonstrates through the Duchess of Berwick the contradictory and hypocritical nature of Victorian traditional moral values. She expresses the disparity between social expectations of men and women, as she believes that it is acceptable for men and women to have affairs as they can be “so extremely susceptible”, but it is a ruin of a woman is she does: “I caught him winking at my maid, a most pretty, respectable girl.

I dismissed her at once without a character”. This shows the double standards and her moral code is hollow and hypocritical, which is contrary to Lady Windermere’s moral code. Wilde has designed the Duchess of Berwick to be a humorous character with her hypocritical nonsense; this shows the audience how ridiculous her moral code is and as the characters are reflective of the audience, some may be just like her. She has come to visit Lady Windermere to inform her of the goings-on between her husband and Mrs.

Erlynne, but frankly is it any of her business? She makes complex speeches which sound impressive, when in fact she is not saying anything complex. The Duchess’s nieces, the Saville girls, are the embodiment of her moral ideas; they are “such nice domestic creatures” who are “plain, dreadfully plain but so good” (dreadful is extreme language) She has obtained her information on Lord Windermere’s unusual behaviour from her nieces who “never talk scandal, they – well, of course – they remark on it to every-one” – contradictory nonsense yet again.

Additionally, the use of the phrase “of course” demonstrates how gossip and scandal is an important part of Victorian society and is socially acceptable when we know gossiping is intrinsically wrong and only has bad consequences which we shall discover later on in the play. The Duchess of Berwick’s moral code is somewhat abhorrent, her advice if a husband is unfaithful is to “just take him abroad and he’ll come back to you all right – slightly damaged, of course”. Again, the use of the phrase “of course” suggests this is the norm when dealing with adulterous husbands.

The hollow hypocrisy that is displayed is as much to be criticized as Lady Windermere’s moral absolutes yet ironically these two women are considered socially acceptable, when the real good woman in the play Mrs Erlynne is seen as “inadmissible into society”. The final conversation is between Lady Windermere and Lord Windermere. She has jumped to conclusions about what her husband has been up to and therefore checks his bank book. She uses a knife to open it, her moral code doesn’t stop her from invading her privacy; a noticeable flaw in her absolute moral code.

Her husband is shocked to discover his wife has done such a thing, he believes that hasty judgement is wrong and people deserve to be given a chance. He does not hold absolute values like his wife but he does know that when a wife spies on her husband this is wrong. However in this conversation, we see another glimpse of Lady Windermere’s contradictory moral values, she says to her husband “you have taught me to love you”, whereas in the earlier conversation with the Duchess she explains that “Windermere and I married for love”.

Lady Windermere says that “if that woman crosses my threshold, I shall strike her across the face”; violence is immoral under all circumstances, so she is hypocritical here. Throughout this first act, Wilde is setting her up for a fall, her moral code will let her down! Wilde is intrinsically criticizing Victorian society morals and he probably hopes his audience shall learn from the play as well as enjoy the humour. A modern audience would see this play and realise how much society has changed since then. Morality is a key issue in this play, and this theme is continued in the later acts. 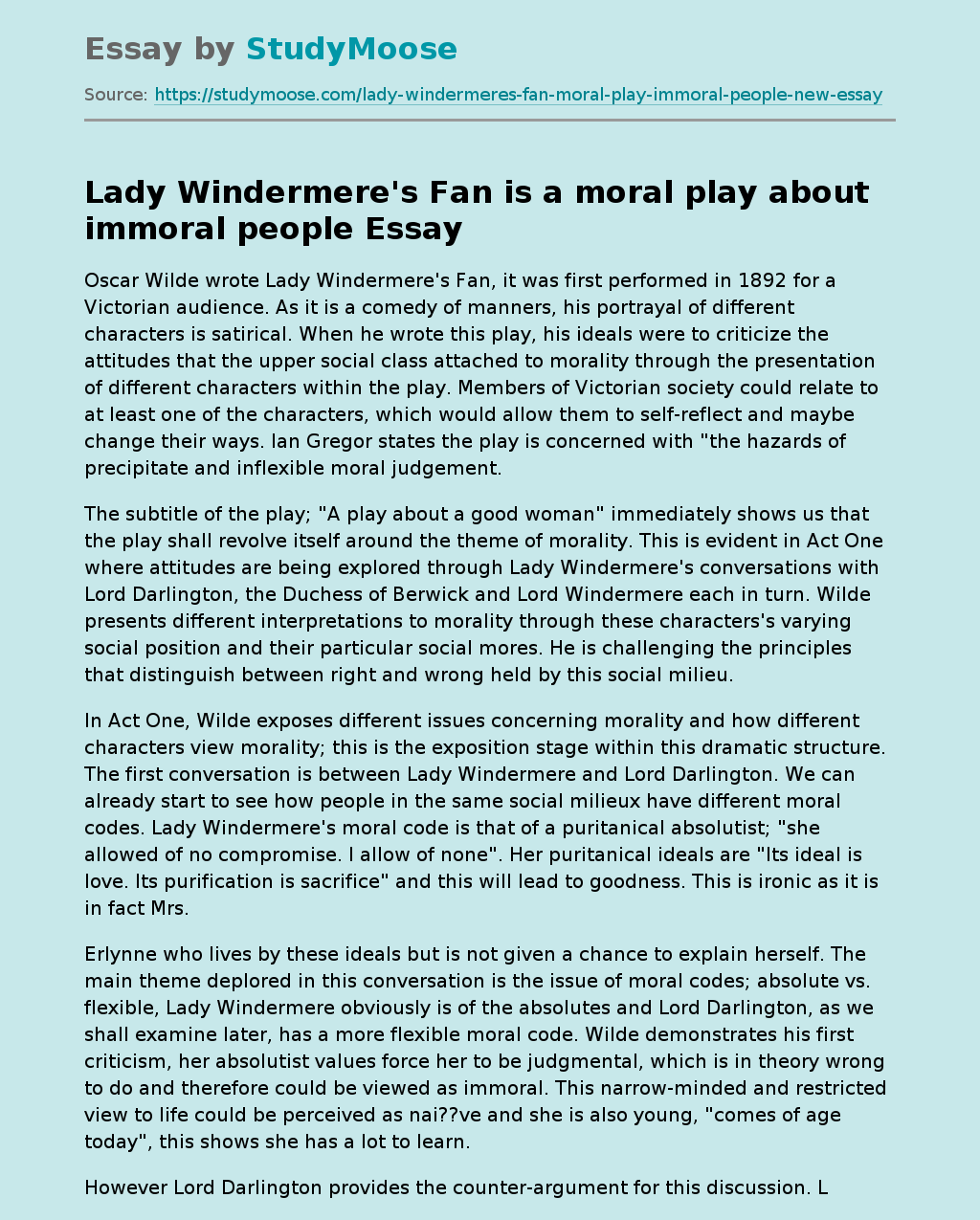