Let’s take into consideration the conflict between Lord and Lady Windermere. This conflict arises purely due to a misunderstanding (when Duchess of Berwick tells Lady Windermere of her husband being with another woman e. g. “He goes to see her continually, and stops for hours at a time…”) and through deception on the part of Lord Windermere (although he promises to his wife that he has not cheated he will not tell her of why he and Mrs Erlynne were meeting), albeit for altruistic reason.

The conflict is never really heated or serious and the audience can appreciate the humorous situation as we know that all will end well and any misunderstandings will be clarified by the end of the play, as is an example in “Much Ado About Nothing” and many other romantic comedies. Harmony is restored at the end of the play; this being the cardinal rule of comedy. One of the biggest examples of this is the bond that is created at the end between Lady Windermere and Mrs Erlynne; Lady Windermere even telling her husband to “never speak against Mrs Erlynne again.

” However, harmony is only achieved through deception and an adherence to superficiality. Wilde seems to be suggesting that in order to live in a harmonious society we need to pretend that all is well and overlook factors which don’t suit our outlook in life. This was certainly the case in Victorian society where the outwardly conservative gentility contrasted with the seedy underbelly and depravities of many parts of metropolitan life at the time.

This contrast between these two has a very strong affect not only on the direction of the play but also, the relationship between the characters. Relationships between characters are very important as when or if a relationship were to change, the story itself could have taken on a completely different route. The conflict has also allowed Wilde to turn the tragedy around in ways and create a more humorous piece Many Characters throughout the play deceive not only other characters but also themselves.

Lord Windermere deceives his wife in order to protect her from scandal; Mrs Erlynne deceives Lady Windermere in order to protect her from the harsh truth that she is her mother and abandoned her; Lady Windermere deceives her husband temporarily as she intends to run away with Lord Darlington. There are many examples of these deceptions throughout the play, as stated above. Mrs Erlynne even threatening Lord Windermere stating that she “will make my name so infamous that it will mar every moment of her life. It will ruin her, and make her wretched.

If you dare tell her, there is no depth of degradation I will not sing to, no pit of shame I will not enter. ” and telling him that she “forbid” him to tell her. Unlike in “Much Ado About Nothing”, not all is revealed at the end as Mrs Erlynne’s identity is kept secret from Lady Windermere, although all is revealed to the audience. Wilde seems to suggest that the truth is not always the best thing for everyone as it can be better to live a lie and maintain harmony in society rather than live an open, truthful life but cause chaos and disharmony.

Although the contrast between deception and truth doesn’t seem to have a massive impact on the play it does however, create the play. If not for the deception between that of Lord Windermere and Mrs Erlynne there would be no real story, this is because Mrs Windermere would not have been misled into thinking her husband had committed adultery but also, Mr Windermere and Mrs Erlynne would have had no real reason to have met up in the first instance. It also gives the audience something to think about.

Wilde shows that whilst being truthful may seem like a good idea, sometimes it is better to deceive instead to keep someone else’s piece of mind. Another contrasting theme is the society versus the individual. Victorian society has a very controlling influence on the individual as it was very difficult to fight against the society conventions and instead, many found it easier to adhere to the rules and social mores imposed by Victorian society, at least publicly. Mrs Erlynne was a victim of circumstance, many of the other characters slandering her, Duchess of Berwick calling her a “horrid woman.

However, Mrs Erlynne plays an important role to represent the power Victorian societal conventions had on the individual as she was forced to abandon her child and hide herself away as she had broken the moral code. She later returned to society and seems to be an individual who will not play by the rules and will do whatever it takes in order to achieve her goals; Lord Windermere saying that he “used to think that will all your faults you were frank and honest. ” and of her “blackmailing” him to get what she wanted. 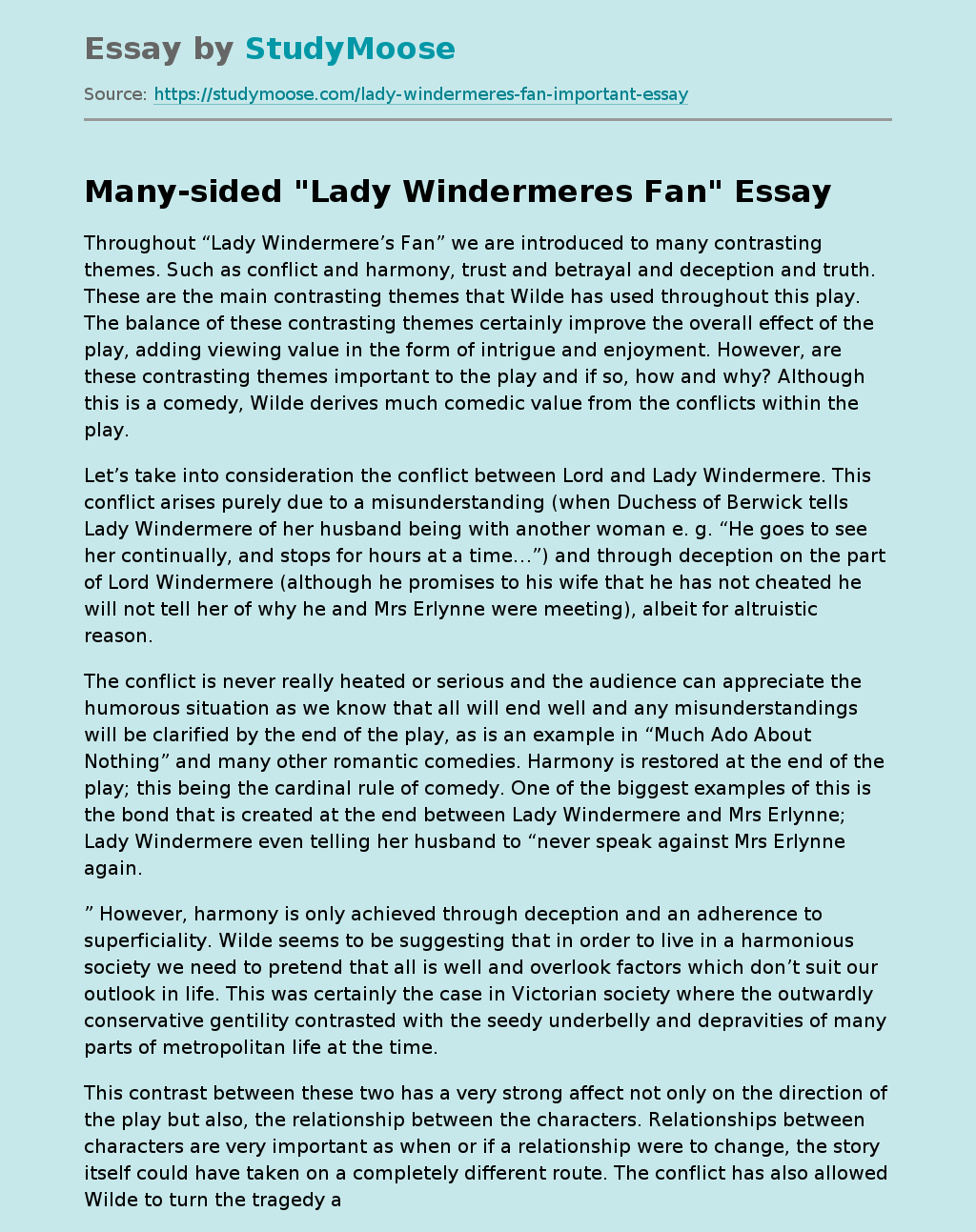