Macbeth is a tragedy written by famous playwright William Shakespeare. Written to warn against being overly ambitious, this play contains many villains, including the infamous Lady Macbeth. Through the nature of Lady Macbeth’s villainy, we can see the duality of man, that we are neither good nor evil.

Lady Macbeth’s nature of villainy stems from her ambition and recently deceased child. Upon receiving the letter from Macbeth, she goes on to wish for spirits to “fill me from the crown to the toe top-full, Of direst cruelty.

Don't use plagiarized sources. Get your custom essay on
“ Lady Macbeth: The True Villain ”
Get custom paper
NEW! smart matching with writer

Make thick my blood.” (1.5.32-33) This implies that she is even more ambitious than Macbeth. While Macbeth has the ambition and drive to become king, he doesn’t have the cruelty to kill Duncan, so she wishes to gain that cruelty in order to convince him and help him. She is also grieving her recently deceased child as she also wishes that spirits “Come to my woman’s breasts, And take my milk for gall, you murd’ring ministers,” (1.

5.37-38) She wishes her milk be turned to acid, which could be the nature of her villainy as the death of a loved one, especially a child, can be so devasting as to drive one to madness and wrong doings. Perhaps she feels a need to react revenge upon the world for being so cruel to her, she could also be wanting to fill the void left by grief with the happiness of being a queen. She even talks about how she would do it herself if she were a man, but social constraints stop her.

Her nature of villainy stems from over ambition and grief.

Lady Macbeth’s villainy shows the duality of man, that we are neither good nor evil, and contributed greatly to the plot of the play. Through her villainy, she convinces Macbeth to kill King Duncan. This is important to note as she claims that to have such power that she would, to her child, “Have plucked my nipple from his boneless gums. And dashed the brains out, had I so sworn as you. Have done to this.” (1.7.55-59). This shows her brutality and unrelenting desire for power. She would have murdered her own child, for whom she is currently grieving, if it meant that she would gain power. It also shows her commitment as she says that if Macbeth had asked that of her, she would have done so. She is single minded in her lust for power and gain and realizes that murder is necessary if she wishes to be queen, even as her husband toils over his loyalty to the king. Upon seeing Banquo’s ghost, Macbeth becomes rather ill. Instead of caring for her husband or leading him to a seat or bed, she becomes fearful he will release the truth and ruin her chances at being queen. This is shows that her villainous ambition is even more powerful than her emotions towards her own husband. 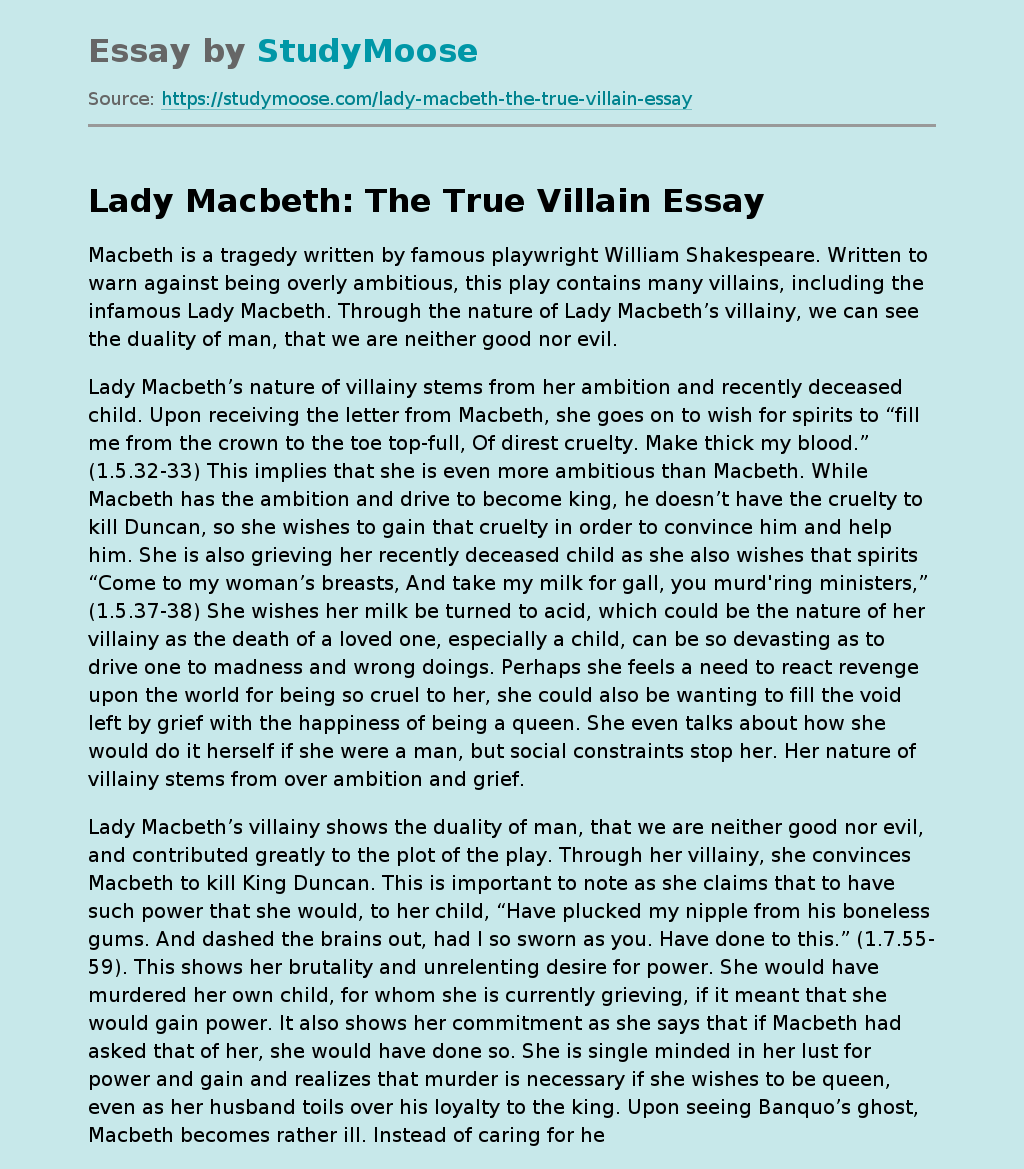