In Shakespeare’s play Macbeth, Lady Macbeth is a more evil character than her husband Macbeth. What makes her evil is her greed, envy, and her lust for power. She pushes Macbeth to do evil things, but the evil starts with her. She finds and exploits his weaknesses and gets under his skin about them. She challenges his manhood, manipulates him, and inspires him to do more.

When Macbeth says he’s not going to kill Duncan, she tries to manipulate him into doing it.

Don't use plagiarized sources. Get your custom essay on
“ Lady Macbeth in Macbeth ”
Get custom paper
NEW! smart matching with writer

An example is when Lady Macbeth says “When you durst do it, then you were a man; And, to be more than what you were, you would, Be so much more the man.” (Shakespeare I.vii.). She questions his manhood to manipulating him into doing things. She always does this when she wants something she can’t do herself. Another example occurs after Macbeth’s letter of wanting to become the king, she says “too full o\’ th\’ milk of human kindness”.

(I.v.). She says he is too full of kindness, so basically he is soft. She doesn’t believe in him.

When Lady Macbeth makes Macbeth planted the daggers and smears them with blood, he decides to take them out. “Why did you bring these daggers from the place? They must lie there: go carry them; smear The sleepy grooms with blood.”(II.ii.). After Macbeth takes the dagger out a lady Macbeth asks why because they were going to be used to frame the guards of murder.

Again she gets in him for doing the right thing. Lady Macbeth is more evil by intentions also because of what she swears. “I would, while it was smiling in my face, Have plucked my nipple from his boneless gums, And dashed the brains out, had I so sworn as you have done to this. (I.vii.). Lady Macbeth says she would kill her own baby if she promised to. This is implying that is Macbeth promised to kill someone he wouldn’t.

This is again an example of how she gets in his head to manipulate him. She acts like an innocent person from Macbeth’s point of view. Lady Macbeth shames Macbeth by saying she can be a better king than he can be. “Come, you spirits, That tend on mortal thoughts, unsex me here, And fill me from the crown to the toe top-full Of direst cruelty! make thick my blood;” (I.v.). She asks the spirits to unsex her because only men could be king at the time and give her the crown, and she will be the cruelest. She says to make her blood thick which implies being dead while being a king. She is trying to sell her soul to the devil to get what she wants. Lady Macbeth often talks more than she acts. All the things she says she doesn’t follow up with what she says. She says things to get Macbeth thinking is she would do this I should too. So she comes up with all the evil plans and plants them in his head by saying things that make him feel like he has to do it. This ends up in the death of Duncan And Banquo. She has taken all his power to think for himself.

A real king wants to rule by doing good deeds for his people so he is remembered. He also hopes they have a successor to the kingdom. “Upon my head, they placed a fruitless crown.” ( III.i.). Macbeth has admitted he has a fruitless crown on his head and this is making him regret what he has done. Lady Macbeth seeing Macbeth’s weakness allows her to prey on it snd get into his head. Macbeth says “For Banquo\’s issue have I filed my mind;.”(III.i.). This is another example of how Macbeth feels guilty about Banquo. He says his mind is filed meaning he’s focused on one thing and nervous about this. This would have never happened if Lady Macbeth never pushed him to this and let him be how he was. She has brainwashed him into thinking it’s for his own good “For mine own good, All causes shall give way: I am in blood Stepp\’d in so far that, should I wade no more,” (III.iv.). Lady Macbeth has put him so far into this that it is too late for him to go back. He thinks it’s for its for his own goodwill to take the thrown. He has basically become like her because of her.

From the very beginning ever since Macbeth Told Lady Macbeth and the which’s prophecies, that he wanted to be king, she took over the power and has become evil. She constantly challenged his manhood, manipulated him, and led him to do more bad. The result of this is what she wants to transfer into his head, so ultimately she is the evilest character in Macbeth. 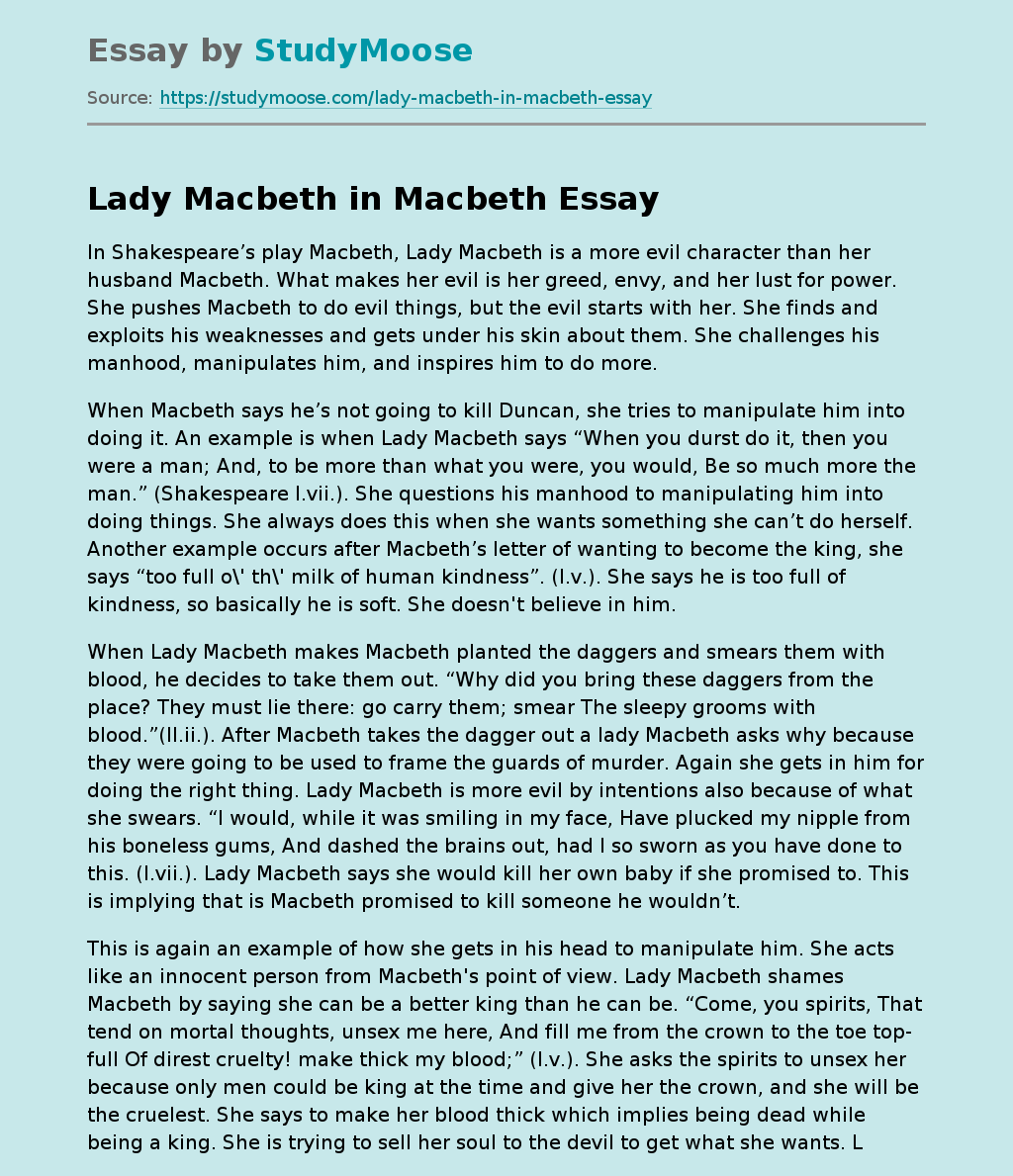