This paper discusses how Lady Macbeth should be seen as a wife in support of her husband.

One of the main characters in Macbeth, Lady Macbeth, has been an object of intense criticism. Although sometimes regarded as cruel and vile, evidence exists that Shakespeare did not intend for her to be judged so harshly. By evaluating her character in relation to her actions, her overall relationship with Macbeth, and her death, we can see that Shakespeare quite possibly wanted Lady Macbeth to be judged in association with the actions of Macbeth.

Don't use plagiarized sources. Get your custom essay on
“ Lady Macbeth ”
Get custom paper
NEW! smart matching with writer

What appears to others as ruthlessness and ambition, is really her loyalty and love for him. Just as Macbeth is ambitious for the throne, so is Lady Macbeth driven to assist him. All of her actions are done out of devotion and allegiance to Macbeth. Throughout the play, the character of Lady Macbeth is developed through her actions, which reveal her inner cravings. She plays the important role of one who gives incentive to Macbeth, as well as one who supports him through difficult times.

She is the catalyst who starts Macbeth’s thinking. She possesses an aspect which cares for the future of her husband, and therefore inspires him to pursue the possibilities. More important than advocating actions to take the kingship, Lady Macbeth encourages Macbeth to remain strong. When his weaknesses appear, she remains firm. Because of Lady Macbeth, Macbeth achieves success. Once set on attaining the crown, Lady Macbeth pushes Macbeth to remain valiant and assists him in his pursuits.

The goals of Macbeth become her aspirations as well. When Macbeth informs Lady Macbeth of his new found glory, she immediately begins thinking of the possibilities that lie in the future. Her initial desire to help Macbeth take the crown becomes clear when she speaks, “That I may pour my spirits in thine ear,/And chastise with the valor of my tongue/ All that impedes thee from the golden round/ Which fate and metaphysical aid doth seem/ To have thee crowned withal” (I.v.26-30). Although it appears that she is monstrous, she is expressing her care for Macbeth by wanting to assist him. She continues on to say, “Come, you spirits/ That tend on mortal thoughts, unsex me here,/ And fill me, from the crown to the toe, top-full/ Of direst cruelty!” (I.v.40-43). This quote is voiced with the intention to become strong to help murder Duncan for her husband’s grandeur. Upon Macbeth’s arrival to see her, she expresses her plan to kill Duncan, and then utters, “Only look up clear./ To alter favor ever is to fear./ Leave all the rest to me” (I.v.72-74). At this point she takes control of the assassination of the king. She has taken it upon her to aid in the murder of Duncan so Macbeth may become ruler. The support that Lady Macbeth gives to her husband is crucial in his pursuits. After returning from slaying Duncan, Macbeth is ashamed of his deed and has become weak and sullen. He says, “I am afraid to think what I have done;/ Look on’t again I dare not” (II.ii.50-51). In this time of pity, Lady Macbeth remains bold, replying, “Infirm of purpose!/ Give me the daggers. The sleeping and the dead/ Are but as pictures. ‘Tis the eye of childhood/ That fears a painted devil” (II.ii.52-55). Macbeth begins to take on the guilt of the deed, while Lady Macbeth “shame[s]/ To wear a heart so white” (II.ii.63-64). She is the stern and unfeeling influence that Macbeth needs. Once she recognizes that he is at a moment of despair, she attempts to give him a sense of boldness. She cares for his well being, and wants him to remain strong. It is this “concern” that she has for Macbeth that proves that she is not monstrous. Not only does she support him, but Lady Macbeth also covers up her husband’s weaknesses. While feasting at a banquet in the palace, Macbeth’s conscience overwhelms him and he undergoes a mental break down. Shortly after having Banquo murdered, Macbeth believes he sees the ghost of his once companion. He begins to speak to the apparition, which is not visible to the others. Realizing that her husband might say something connecting him with the murders of Duncan and Banquo, Lady Macbeth makes excuses for his behavior. She says to them, “My lord is often thus,/ And hath been from his youth. Pray you, keep seat./ The fit is momentary;” (III.iv.53-55). She hides her husband’s insanity, and later commands the lords at the dinner to leave, stating, “Stand not upon the order of your going,/ But go at once” (III.iv.118-119). In this time when Macbeth could have revealed his associations with the previous murders, Lady Macbeth defended and stood up for him. The relationship between Macbeth and Lady Macbeth exists through their desirous schemes. There are never any intimate moments between them, so one must observe their relationship through their actions and their words to one another. While alone in the palace after the murder of Banquo had been planned, Macbeth talks of their past actions in remorse, but Lady Macbeth is there to help build his self esteem. She says, “Why do you keep alone, … Things without all remedy/ Should be without regard: what’s done is done” (III.ii.11-12). She continues to comfort him by further saying, “Gentle my lord, sleek o’er your rugged looks;/ Be bright and jovial” (III.ii.27-28). She is concerned with his declining mental state and continually tries to aid him through her support. The death of Lady Macbeth is vital in understanding her mental condition. At the beginning of the play she appears to be unyielding and insensitive to all feelings, but as the play progresses her conscience continues to overcome her. When talking to Lady Macbeth’s Gentlewoman, the doctor utters, ” Unnatural deeds/ Do breed unnatural troubles. Infected minds/ To their deaf pillows will discharge their secrets” (V.i.70-72). Her death is a result of the effects that her deterioration has. Her mental state has altered to a minimum, and has harmful side effects. She begins sleep walking, having nightmares, and talking in her sleep. Towards the end of her life a doctor analyzes her condition and reveals, “This disease is beyond my practice” (V.i.57). She wares down to a point where she is hopeless, and the only answer is suicide. The self-destruction shows that Lady Macbeth has feelings and emotions, and regrets all of her crimes. Although regarded by some as fiendishly cruel and monstrous, Lady Macbeth is not intended to be thought of that way. She cares for Macbeth as her husband, and what may look vicious to some, is her support to him. She remains faithful, staying by him until the point of her suicide. She encourages Macbeth, and stands by him in troublesome moments. Her death is evident that she has a sense of right and wrong, and that she possesses a sense of grief and sorrow. All in all, Lady Macbeth is a caring wife in full support of her husband’s actions. Work Cited Shakespeare, William. Macbeth. Elements of Literature. Ed. Robert Anderson et al. 6 volumes. Austin: Holt, 1989. 6: 254-329. 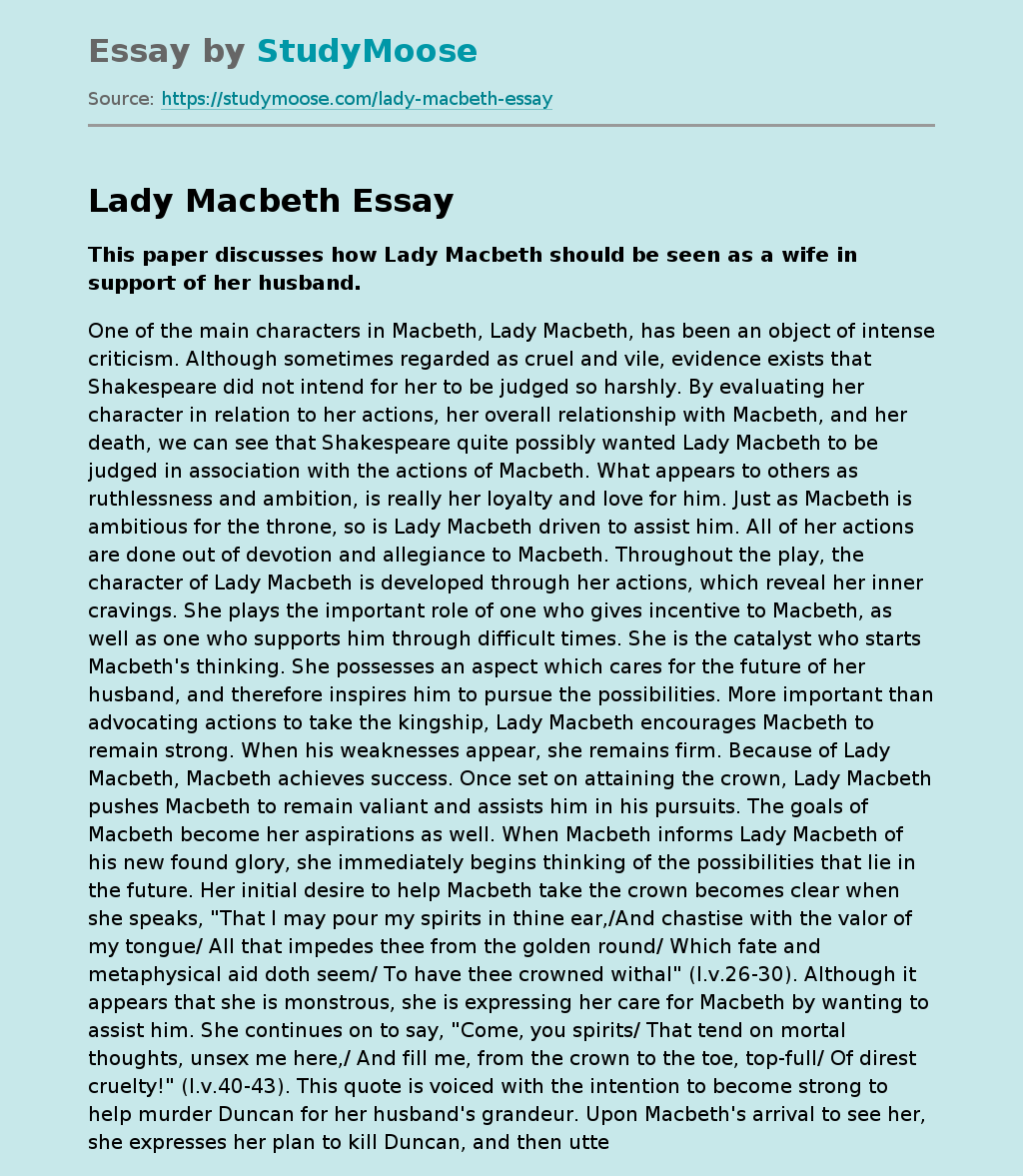