Shakespeare, who was a writer born in Stratford-upon-Avon created many different plays, in which he always portrayed the woman as the “bad guy. ” He was born in 1564 and he was a writer, actor and a dramatist. He wrote many plays, mostly revolving around tragedy such as: Romeo and Juliet, Hamlet and Macbeth. Shakespeare was a respected poet, and writer who received recognition after he passed away, April 23rd. 1616. One of Shakespeare’s well-known tragic plays “Macbeth“ describes how a greedy woman second guesses her husband’s manhood and convinces him to murder a King and take his place.

Don't use plagiarized sources. Get your custom essay on
“ Lady Macbeth Character ”
Get custom paper
NEW! smart matching with writer

The characters in this play make the readers` think the women back in the day were greedy, selfish and conniving. Lady Macbeth, who plays one of the most impacted roles, is described as a woman who second guesses her husband`s manhood and forces him to commit a crime due to a prophecy from three witches. Lady Macbeth starts off greedy, but then she starts to feel guilty about all the things she has made her husband do.

Lady Macbeth`s character is responsible for the evil doings of Macbeth because she convinces Macbeth that he isn`t capable of anything, she makes him feel vulnerable but she controls him after the murder and she uses his love for her to achieve her selfish goals. The 3 prophecies slowly changed Lady Macbeth`s opinions on life and made her extremely greedy. The beginning of the play, Lady Macbeth is a controlling, ambitious character. She is the one who encourages her husband to kill the king.

She not only encourages him, she also creates all the plans herself, and makes him put them into action; which shows that she is persistent. For example, ”Yet I do fear thy nature, it is too full o’th milk of human kindness. To catch the nearest way thou wouldst be great. Art not without ambition, but without the illness should attend it. ” (Act 1, scene 5). Lady Macbeth is the cause of this sudden change in Macbeth. She tries to manipulate him into thinking he is not really a strong man; she thinks of him as a coward.

Lady Macbeth is the one behind all of the wrong things Macbeth has done because she convinced him that she may actually be stronger than him, she makes him feel vulnerable and uses her sexual appeals to make him kill Duncan. Lady Macbeth rises a feeling of being vulnerable in Macbeth, but after he kills Duncan, he starts to become more controlling. Lady Macbeth`s guilt for being one of the causes for Duncan`s death eventually gathers up to a limit where she cannot live properly anymore, and leads to her death.

Duncan`s murder cannot be committed by Lady Macbeth because he resembles her father; “My father as he slept. “ After Macbeth kills Duncan, she shows sympathy and makes Macbeth feel strong and achieved to keep him from going insane. She also jokes around about the murder; she tells him to just forget it ever happened: “These deeds must not be thought after these ways: so, it will make us mad. “ Lady Macbeth did help Macbeth through the murder of Duncan by controlling his conscience, but as a result, she went crazy and committed suicide.

Lady Macbeth doubts her husband`s manhood, she takes advantage of his love for her, and she makes him vulnerable but she also controls him after Duncan`s murder; those three things are the reasons` behind Macbeth`s evil doings. Lady Macbeth uses her sexuality to reach her goals of becoming a part of royalty. She knew Macbeth loved her and trusted her completely; she also knew that he cared about her opinions and suggestions. She is responsible for the heartless things that he did to prove his manhood to her.

Macbeth would not have done those things if it weren`t for Lady Macbeths greediness, or the witches prophecies. For example, “Was the hope drunk. Wherein you dressed yourself? Hath it slept since? And wakes it now, to look so green and pale. At what it did so freely? From this time, Such I account thy love. Art thou afeard, To be the same in thine own act and valor. As thou art in desire? Wouldst thou have that Which thou esteem’st the ornament of life, And live a coward in thine own esteem, Letting “I dare not” wait upon “I would, ”Like the poor cat i’ th’ adage? ` (Act 1, Scene 7) Lady Macbeth starts to question Macbeth; she starts to ask him if he was drunk while planning the whole murder of Duncan, she starts to think of him as a coward once again. She emotionally blackmails him and starts to ask him if her love for him means nothing. Lady Macbeth is the main reason of Macbeth`s ill-doings because she made him feel very vulnerable, she used her sexual appeal to get what she wanted, and she convinces him that he`s not worthy of being called a man.

The play Macbeth starts off with a noble soldier who slowly turns into a man f brutal characteristics. Shakespeare portrayed Lady Macbeth as a greedy woman, who eventually got tired of herself and her crimes, that she committed suicide. He characterized her as a strong, determined woman and then he slowly turned her into a weak piece of furniture. Born in Stratford-upon-Avon, Shakespeare was a creative writer who mostly wrote about tragedies. He proved that everyone is influenced by their surroundings, (including leaders or authority) to make the wrong decisions at some point in their lives. 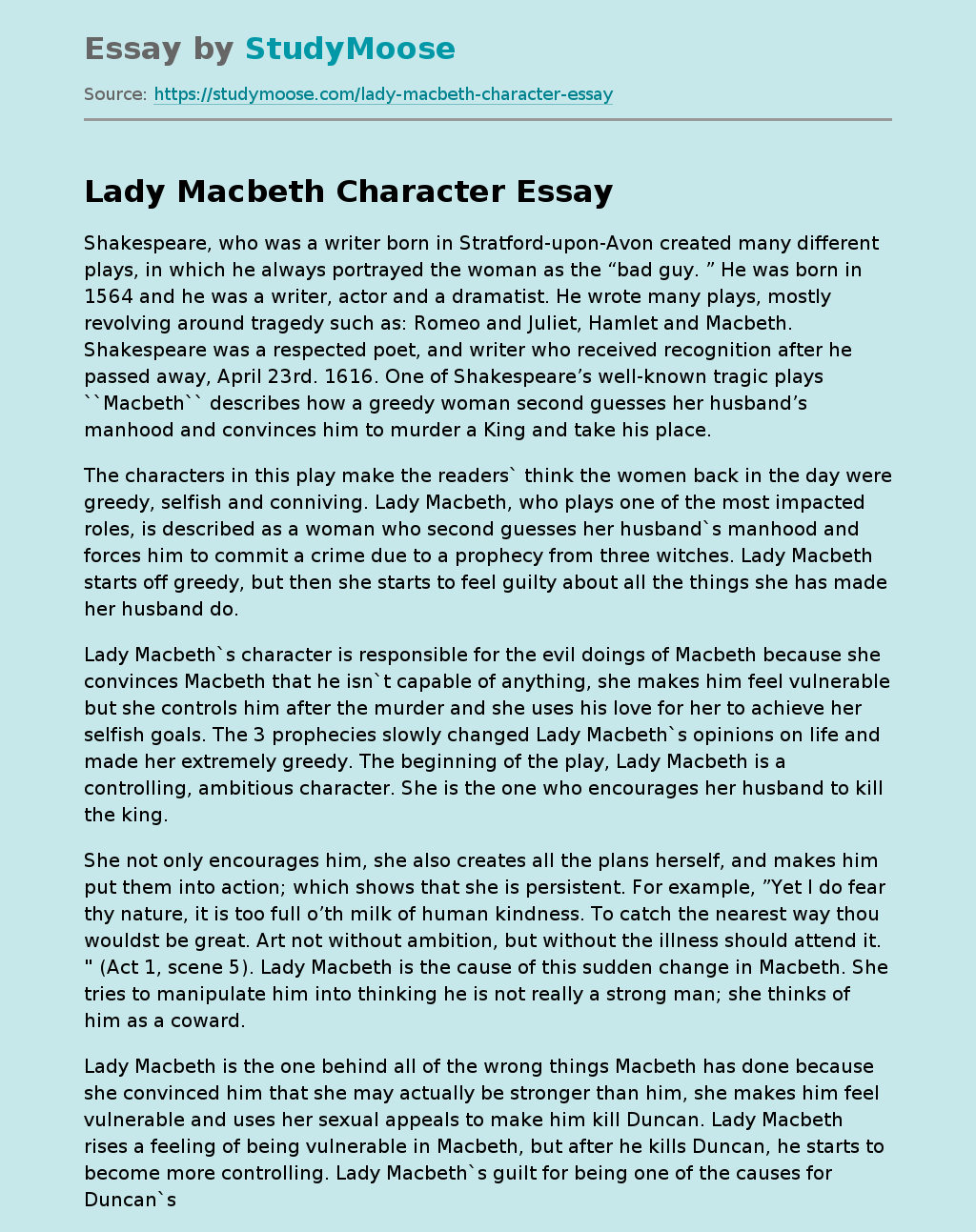