To conclude the protagonist and noble and valorous military man Macbeth, who is featured in the play “The Tragedy of Macbeth”, written by William Shakespeare, we must first acknowledge his back story, where three witches prophesy that he will eventually become the king of Scotland, and due to the advocating of his wife, Lady Macbeth, and his strong interest in becoming king himself, he decides to forge a plan which includes murdering the current king, King Duncan and acquiring the throne himself.

But just before the execution of their plan, Macbeth becomes hesitant, and his conscience apprises him. He starts to feel indecisive and dubious towards his decision of murdering King Duncan, because he had just made him the Thane of Cawdor and he has a strong moral sense, by indicating him that violence will return, for when you act upon it. This shows us that Macbeth is a good person and is ready to act fairly and decline the delight of becoming king.

Later, when he explains everything to his wife, Lady Macbeth, she begins to condemn him for his rightful choice, leading to Macbeth becoming restrained (II. 4-19).

Macbeth is barely seen to speak or express his worry after his wife accuses him to be a coward. He only tries to be reasonable with her and is longing for peace, which results in Lady Macbeth declaring her opinion about his behavior and his sudden break of promise and when she exclaims that she would even murder her own baby, instead break a promise she has made to him (II.

20-35). This resulted in Macbeth starting to obtain admiration for her confidence and imperiousness. Lady Macbeth then begins to comfort him and assures him to be unconcerned, which finally makes his fret vanish, and he accumulates strength and courage in order to implement their plan (II. 37-54). This gives us the final closure and impression of Macbeth being a solicitous person, but easily convinced into doing things, when he amasses enough bravery.

Lady Macbeth on the other hand shares the same objectives as Macbeth but is slightly different when it comes to her intentions and her character. She wants her husband to succeed and become king, for she can become queen. She uses guidance and manipulation at the same time, to persuade her husband into killing King Duncan. This passage shows that Lady Macbeth is a dominant and fierce woman, hence she will do anything in order to fulfill her dream of them becoming king and queen. But when she hears about Macbeth’s faithful decision of not murdering King Duncan, she gets furious and won’t let him get away so easily. She then starts to criticize his faithful decision and starts to taunt at him, overbearing his ability to speak and stand up for himself. She explains how hurtful she feels, for him breaking his promise and calls him a coward. (II. 8-19). By using the example that Macbeth will always regret his decision of not implementing their plan when he had the chance to, she pressurizes him and makes him even weaker. This technique worked, and Macbeth gives her a glimpse of admiration. When Lady Macbeth notices this, she starts to soften up and even gives him a bit of counseling and support, by building up his courage and strength again. Finally, Macbeth takes Lady Macbeth’s boldness as a commendable trait and steps up to take the risk himself and murder king Duncan (II. 38-53). This shows us, that Lady Macbeth owns an empowering feature of dominance, and use this to get whatever she wants. Yet she uses her husband as an advantage to become queen and pressures him into the action, she still provides him with guidance and comfort, in the end, proving that she does have a light and understanding side, but doesn’t show any sign of affection towards Macbeth, apart from his conveniences in becoming a king. 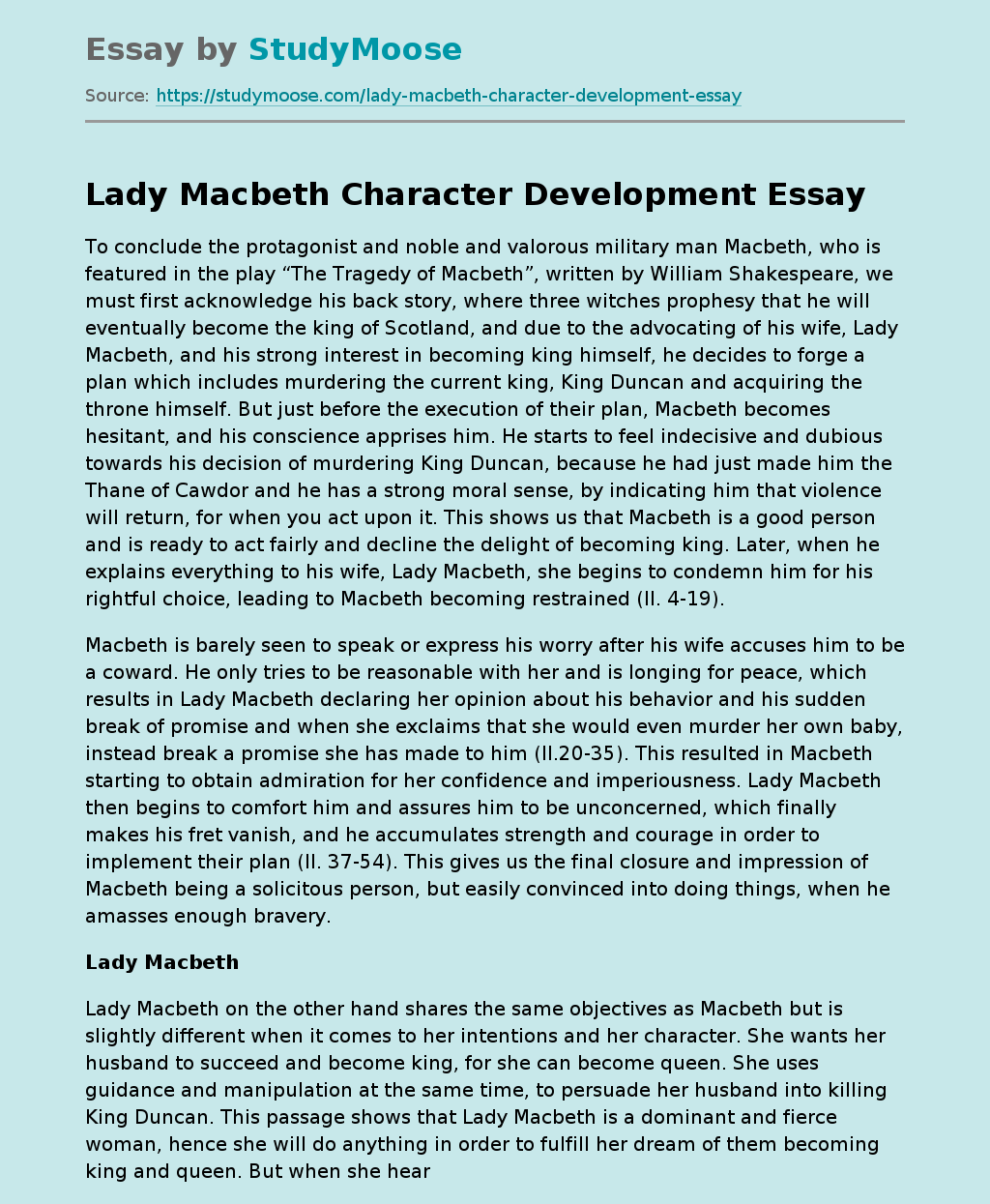