1. What is the crime that the video focuses on? The crime that the video focuses on is the kidnapping and death of Charles Lindbergh Jr. 2. What evidence did investigators have about the crime in the 1930s? A homemade ladder left by the perpetrator, it was 8-10 at night when the crime occurred, nobody heard the baby crying from his room, and there was a ransom note left at the scene of the crime. 3. What evidence did investigators use to find a suspect? What was found at Hauptmann’s home that linked to the crime? One piece of evidence used to find a suspect was the gold certificate money that was given in the ransom.

5. Why is it believed that Hauptmann had accomplices in the crime? It was believed that Hauptmann had accomplices for this crime because 2/3 of the ransom money was not in his possession as well as Douglas’s experience as a psychological profiler, commenting that you need multiple offenders who can reinforce each other psychologically as well as feed off each other to commit a crime such as this, as well as that it was risky to attempt a crime such as the kidnapping and murder of the Lindbergh baby alone.

6. What evidence exists to cast suspicion on John Knoll? What evidence exists to suggest that he wasn’t involved? John was allegedly the name of the man given the ransom at the Bronx cemetery, casting suspicion on him. However, what kind of clears the air for him a little bit is Dr. Condon’s accounts, which frankly seemed to be somewhat inconsistent, as well as the present day handwriting analysis which makes points to it being unlikely that John Knoll wrote the ransom notes.

7. What evidence exists to suggest that Charles Lindbergh himself was involved in the kidnapping and death of his son? Do you agree or disagree with this theory? Why? The evidence that apparently suggests that Lindbergh was involved was his hatred of the police, his behavior, and the keeping of the ransom notes and meetings secret, making people believe he was hiding something. I don’t want to believe that Lindbergh would orchestrate the kidnapping of his own child, but, there is evidence pointing to him doing such a thing, and the biggest piece of it would be his interest in the eugenics movement. There are some people that would go to great lengths to try to have the best kid they could (even though the best kid they could have is one that they produced to begin with, anomaly or no anomaly). 8. Based on the evidence presented in the video, what do you think happened? What evidence supports your theory? Personally, what I believe happened is that the kidnapping of the baby was indeed orchestrated by Charles Lindbergh, and that there were at a minimum three people involved, those being Lindbergh, Knoll, and Hauptmann. I also believe that there was a possibility of more people being involved, frankly, it wouldn’t surprise me if more people were involved in this case.

I’d like to focus on Knoll for a bit. What I think directly links him to the case is the fact that he suddenly came into a large sum of money and was spending it extravagantly, as well as the fact that he remained in Europe until Hauptmann was convicted. While some people could look at that as a coincidence, I don’t believe it to be a coincidence, I think that he was laying low in Germany until the trial was over. The next thing I would like to take a look at is the handwriting analyses. What was found during each analysis of Knoll and Hauptmann’s handwritings was that it was unlikely that either of them had been the writers of the ransom note, which I feel supports my theory that chances are there were more than just them involved. It’s a possibility that Lindbergh himself could have written those notes, if you absolutely think about it.

The final thing I want to look at the death itself. I feel like the death itself was an accident, the kidnapping wasn’t, but to me, I think death itself was. I can see Lindbergh wanting to get rid of his baby and putting him in an institution because of the fact that he had imperfect genes (as classified by Lindbergh), but to kill one’s own baby because of their genetics? That to me doesn’t make sense, although, the thought of getting rid of your baby just because they don’t have good genes doesn’t make sense to me either, I would love my baby no matter what. I don’t think Lindbergh wanted his baby dead, just in an institution. The bottom line is this, what I believe happened was an intentional kidnapping and an unintentional homicide with at the very least 3 perpetrators. 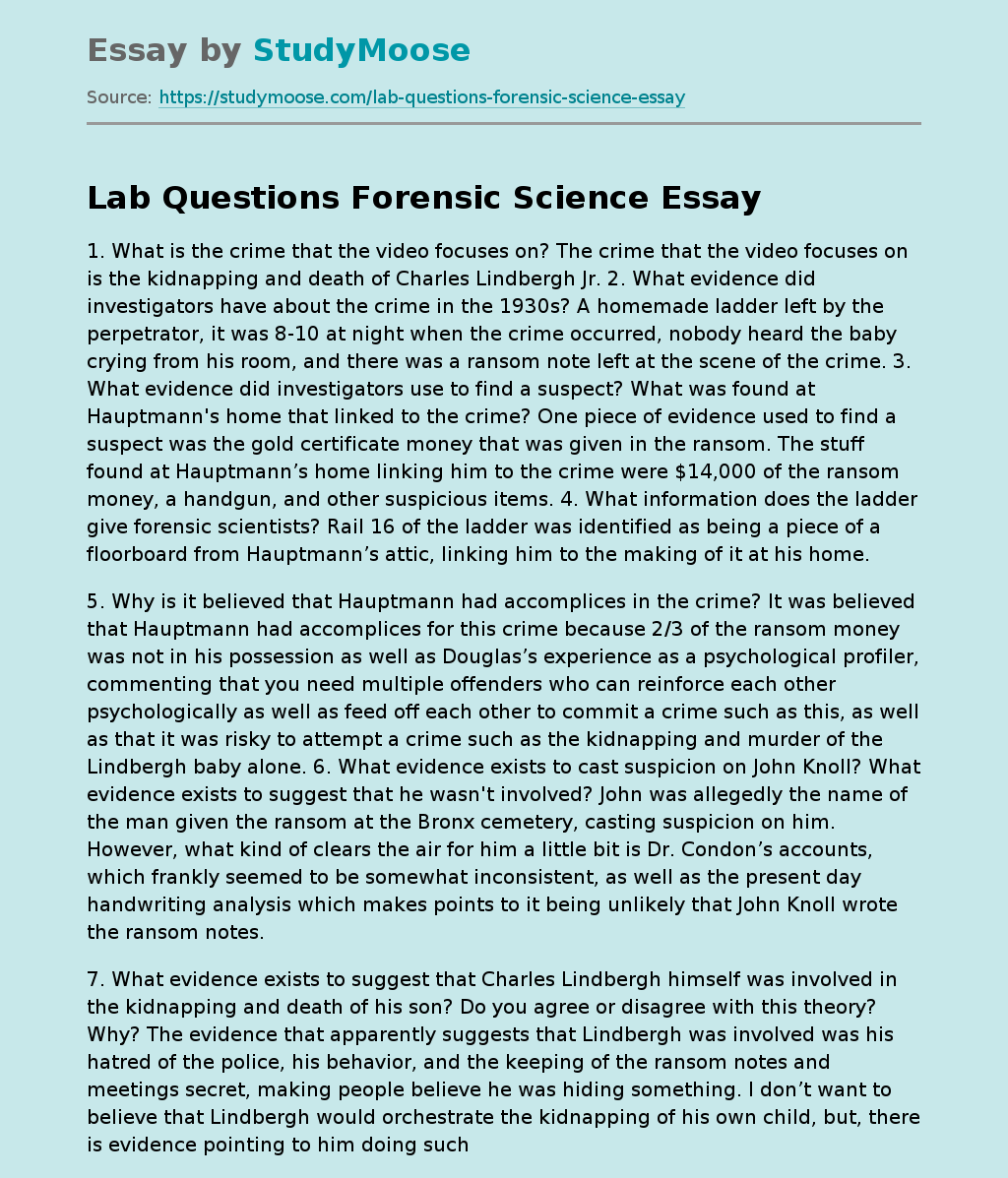