Born in 1772 in Ottery. St., T.S.Coleridge lead a very disquiet life in his early childhood. After his father’s death he was sent to the Christ’s hospital school. There he had felt a great emotional vacuum, which was the beginning of his continuos ill health. Charles Lamb, his schoolmate, gave us an account of this period affirming that Coleridge was highly imaginative, who sought refuge in reading old romantic tales as well as Homer, Virgil, and Shakespeare.

Perhaps the most influential period in Coleridge’s life was the period when he met Wordsworth in 1795, after he had left Cambridge.

Don't use plagiarized sources. Get your custom essay on
“ Kubla Khan by Samuel Taylor Coleridge ”
Get custom paper
NEW! smart matching with writer

It seemed that in the company of Wordsworth, Coleridge found the mental peace, security, and environmental harmony. This had resulted in the sudden flowering of his genius, a sudden release of his creative impulses, and he wrote “The Ancient Mariner”, “The Christable”, and “Kubla Khan”.

Much about the composition and subject matter of “Kubla Khan” can be detected from Coleridge’s Preface to that poem:

” This fragment with a good deal more, not recoverable, composed, in a sort of reverie brought on by two grains of opium taken to check a dysentery…”

This fact raises the issue of the drug’s effect on the poet’s creative imagination.

Early critics assumed that there was a direct and immediate correlation between opium and imagination. In 1934 M.H. Abrams declared that the “great gift of opium” to men like Coleridge “was to access to a new world as different from this one; and one which is ordinary mortal”.

According to Elizabeth Schneider, opium can only work “on what is already there in a man’s mind and memory” and ” if he already has a creative imagination and a tendency to” recall dreams and visions. Then opium may intensify and focus his perceptions.

This last interpretation seems to be the most acceptable one, because this is what really happens to Coleridge. Before he began to dream he had been reading the following words of the same substance, in Purchas’s “Pilgrimage”: “Here the Khan Kubla commanded a palace to be built, and a stately garden thereunto. And thus ten miles of fertile ground were inclosed within a wall”. These words, it is quite apparent, formed the background upon which opium worked, encouraging Coleridge’s mind for imagination.

The effect opium had on Coleridge’s mind manifests itself while examining the structure of the poem itself. It quite obvious that the third stanza is entirely different from the first two ones, as if was written by a human being whereas the other earlier stanzas seem to had been written by a demon or some divine hand. Coleridge himself confesses that he couldn’t revive the interrupted composition of the first two stanzas that were written under the influence of opium, and that when he returned to his writing “all the rest had passed away like images on the surface of a stream”. Perhaps that’s why we find it a fragmentary work, filled with strange, unusual imagery, and lacking a rational structure; its rhythms suggest a mind vacillating between conscious and unconscious modes of being.

Matter of fact “Kubla Khan” is reliable to different levels of interpretation. First, the poem could be approached as a descriptive poem that shares the common beautiful characteristics and techniques of most romantic poets, especially when describing natural elements. Still Coleridge described the world of “Kubla Khan” in terms of the ancient Platonic idea of “Dualism”; where the world of material existence is described as the world of shadows, and the world of Ideals as the elevated one.

Accordingly, “Kubla Khan” could be regarded as a beautiful expression of the poet’s longing for some ultimate beauty combining the work of man with those of nature and those of pure imagination; to resurrect lost archetypal worlds within the imagination. In this way the “pleasure dome” that has been established in fulfillment of the orders of the Tartar Prince can be regarded as an attempt to reach such an ideal world. That’s why the first stanza opens with a carefully constructed image of a walled garden containing “incense bearing trees” and forests enclosing “sunny spots of greenery”; a description that adds a paradisal spirit into the place Kubla has created. The ideal spirit and holiness of this world has been emphasized in a variety of expressions: in affirming that in this “stately pleasure dome did”

Through caverns measureless to man

Down to a sunless sea…

The sacredness of this world has been further affirmed by the fact that it is “girdled round” and protected from undesirable or unharmonious influences.

This scene that has been described in the first stanza stands in contrast to the opening lines of the second stanza; where the poet’s “But” contrasts the planned classical artifact of Kubla with the romantic chasm; the birthplace of poetic genius and true creativity:

But oh! That deep romantic chasm which slanted

Down the green hill athwart a cedarn cover!

Now the atmosphere is different: the rational order of the garden has been replaced by a scene outside the walls, which is “savage”, “wholly”, and “enchanted”. This natural scene is, indeed, a more perfect symbol of the reconciliation of oppositions in the world of imagination, thereby more eternal.

In this stanza we are, also, introduced to the source of that sacred river- Alph- which is seen as symbolizing Plato’s theory of “Dualism” in terms of Man’s journey through life in search for the Ideal world: it flows from a mysterious source- (Man’s birth)- through “a mazy” course- (the complexities of life; poetically symbolized by the “mighty fountain” that “burst” small stones as if breathing)- to sink tumultuously into “a lifeless ocean”-(the sea of death). Between birth and death Man is overwhelmed by a dream of permanence- (the shadow cast by the dome of pleasure). This very last symbol has been developed in representing the dome in dream-like terms inaccessible to Man:

It was miracle of rare devise,

A sunny pleasure-dome with caves of ice!

That’s to say the dome itself- by possessing sunny weather and caves of ice- represent a reconciliation of opposites which is impossible to human life.

With the beginning of the third stanza the poem seems to take a new tern of thought. Now it gives us a vivid picture of a poet caught in a spell of poetic inspiration, who, once in a vision, saw an abyssinian maid playing on her dulcimer and singing of the wild splendor of mount Abora.

At this point the poem becomes reliable to another level of interpretation. It is a poem about poetic creation. With this consideration in mind Kubla Khan, who caused a pleasure-dome and elaborated gardens to be constructed in Xanadu, is a type of the artist whose glorious creation becomes a balanced reconciliation of the natural and artificial. Similarly the poet enters the poem- using first person pronoun- in an attempt to establish his own dome. If only, Coleridge laments, he could “revive within” him the maid’s lost “symphony and song”, if only he could recapture the whole original vision instead of just a portion of it, then he would be able to establish “that dome in air” so that his witnesses would declare him to be divinely inspired and form a circle of worship around him. Being filled with “holy dread” they would cry: 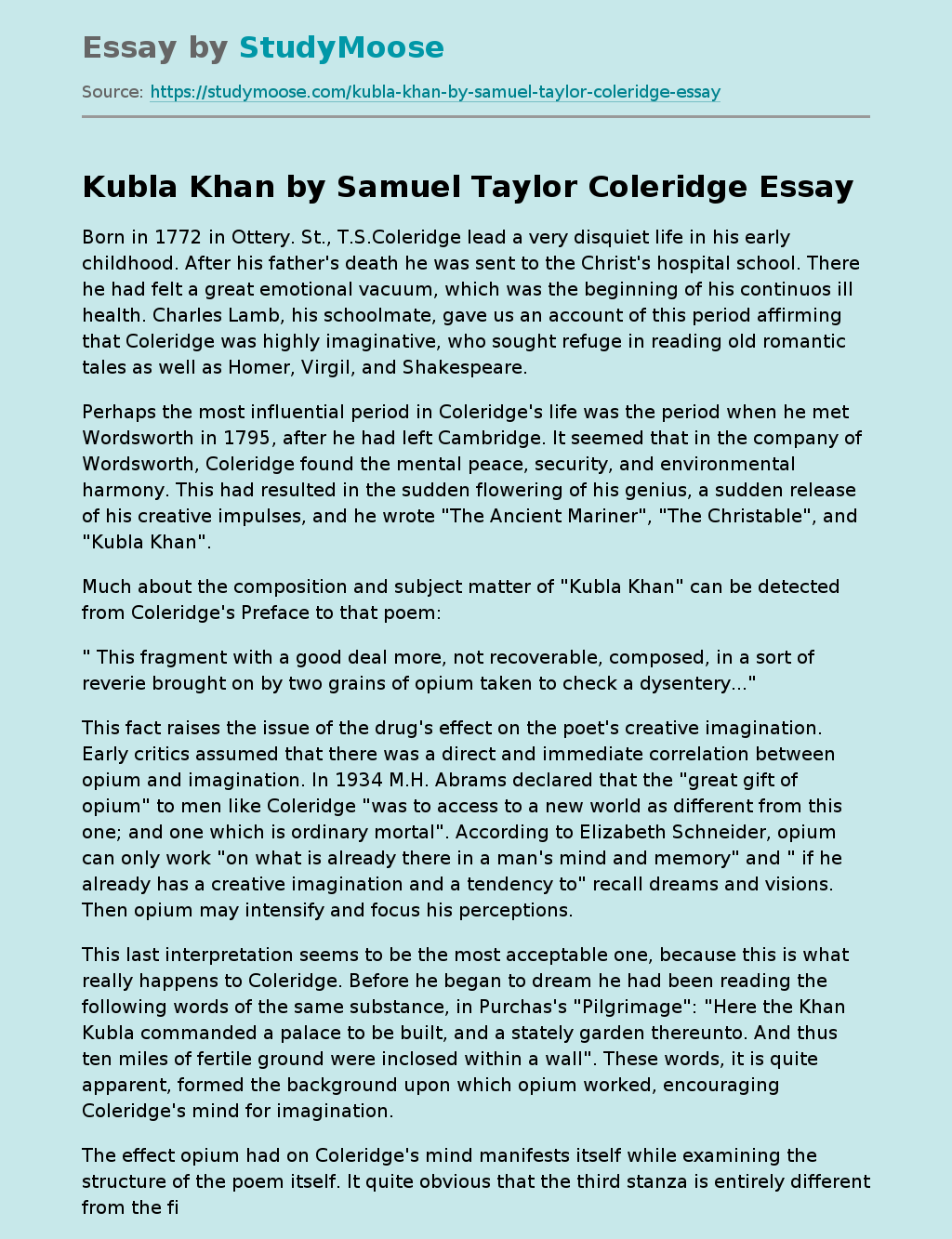