I. Summary of the case

KTM is a designer and manufacturer of motocross, rally and cross-country racing motorcycle that was created in 1934 in Austria. Since that time, KTM maintained a reputation for producing reliable, high quality motorcycle, and for having an expertise in manufacturing core parts. Its marketing focus has always been on building a brand image of a company with technological leadership, high quality products and a legacy of championship titles. In the late 1980s, propelled by the strong financial markets, a financial investor purchased KTM and took the company private.

Though KTM had a good reputation and quality products, it had too many products, inadequate management, and high debt in the books. The company declared bankruptcy in 1991. At that time, a few of the general importers convinced a group of venture capitalists to save KTM. This resulted in the formation of Cross-Holding, involving Knünz (the current CFO) and Pierer (the current CEO).

Their strategy then shifted and the management decided to cut out the general importers and to sell directly through dealers.

Soon, the group decided to go public to attract partners who would be willing to grow with the company, thus securing the growth. Although the company’s share price never dipped below its issue price, a potential takeover bid convinced Pierer & Knünz to go private again. In 1999, BC European Capital invested in return for a 49% stake in KTM. BC European Capital was one of the largest venture capital firms in Europe with over 15 years of experience involving over 40 acquisitions.

In return for their trust, investors were rewarded with a cumulative average growth rate of 31% in revenues and 50% in profits from 1999 to 2002. In 2002, KTM generated 80% of its revenues from off road motorcycles and related accessories. Geographically, 60% of its revenue came from Europe (mostly Austria & Germany). The remainder came from the USA (30%). Due to its strategy focus change, the company distributes 80% of its motorcycles via its own sales subsidiaries and 20% through general importers (mostly located in South America, Africa, Australia & small Asian countries). KTM is planning a geographic expansion in new EU countries and in the USA. Also, the company wants to expand its product line by offering on-road motorcycles, ATV and other products.

While the growth perspectives for Europe are low, the USA, South America and Asia region are believed to be promising. KTM had a strong dealer relations system that enabled the company to respond quickly to market trends, to effectively predict sales and to reduce inventory costs. Its financial performance is indeed based on these key factors: a strong supplier relationship, an improved inventory management and the rationalization of its administrative costs. Still, the company’s debt to equity ratio is high compared to competitors. Knünz projected EBIT to grow between 6% – 8% for the next 3 years before leveling off to around 4% – 6% for the following 2 years. He wondered how the financial markets would affect KTM’s financial outlook.

In 2003, the motorcycle industry was a great sector to invest in as it was expected to experience a 5.3% growth per annum from 2003 to 2007. This growth was mainly due to the fact that motorcycle was likely to gain broader acceptance.

Within this industry we distinguished two main types of product – on-road and off-road motorcycle – that address different type of clients as detailed below.

On-road| * Young riders that seek for performance, thus preferring racing-replicas motorcycle * Old riders that look for a certain lifestyle and being part of a community (e.g. Harley Davidson community) * Others that just use motorcycle as their main mean of transportation (mostly urban males)| Off-road| * Young and edgy * Look for racing and adventure * Drove by trends so that product range would need to be flexible to adapt the changing trends|

Focus on KTM and its competitors

In 2003 the global economic situation was flourishing with growth strengthening up to 3% in 2003 from 2.6% in 2002. Nevertheless KTM first contributor in revenues, Western Europe, was experiencing some difficulties due to unemployment and a strong Euro that also represented a serious threat to the firm’s exports. United States was displaying very positive signs and analysts were forecasting a sustainable pick-up in consumer spending over 2003 thanks to quite low interest rates. Eventually, Asia was still considered as a promising market.

In this context, KTM was presented diverse alternatives to conduct the exit of BC European Capital and finance its future growth.

While IPO was a very common exit option for VC investors, this opportunity could help KTM build a relationship with financial markets and ease the access to future additional funding. In the meantime, such an operation would put KTM’s management under pressure from investors or analysts and implied a sizable expense for the company. The question of the location of the IPO was also raised. Leading it on the Viennese Stock Exchange appeared as a safe option due to the recognition of the firm in the Austrian business community. Nevertheless, a more international operation could give KTM the worldwide publicity it needed. An opportunity even more attractive when firms recently introduced in the NYSE saw extensive participation and displayed strong post-IPO share performance.

There were two main solutions for Knünz regarding strategic investors. Either accept the entry of Harley Davidson in the share capital, though it conveyed the risk that Harley Davidson took over the whole company and the management will completely loose hand on the strategy of the business. The other solution was to replace BC European Capital by another VC investor. But Knünz was concerned about the level of control and involvement they would require in the running of the company and their performance expectations over short period.

The final option was raising capital in debt markets. Because of its current leverage KTM would only receive short term financing from banks and the management was thus rather considering the bond market opportunity. Three interrogations were thus to answer. Should the company provide investors with classic bonds or give them the opportunity to convert them into equity?

Should they structure the offer with a fixed or a floating coupon rate? And last but not least, where should they locate the operation? The location was a central question for KTM since the reputation of the company will enable it to place bonds at a low 5% coupon in Austria when it would have to increase it at roughly 7% to do it in the Euro-currency market. In the mean time, leading the operation in London would enlarge the audience, guarantying the success of the offering, and will help KTM gain a greater visibility.

* KTM is the only pure off-road motorcycle player * KTM benefits from two long time players in the industry that attract investors confidence: Knünz and Pierer * The new investor should leave sufficient liberty for the management to pursue their own strategy * Geographic ally, the growth is projected to be high in the U.S.A, South America and Asia * The motorcycle market is expected to grow by 5.3% per annum from 2003 to 2007 * KTM is in a strong financial position and is looking for a geographic expansion (new EU countries + USA) and a product line expansion (offer on-road motorcycles, ATV and other products) * BC European Capital wants to exit

* KTM wants to benefit from that exit to finance the company’s future growth
* Management wants to keep the control on the company
* Three alternatives are to be considered:
* IPO
* KTM former listing has mostly ended in a bad outcome for the company
* Strategic Investor
* KTM would prefer a hands of investor as BC European Capital was
* Debt Financing
* KTM has a high leverage

III. Questions raised by the case

* Is an IPO pertinent considering future financing needs? * Will an IPO in the Viennese Stock Exchange permit to raise as much as €100 million? * Does a more international IPO really convey a risk for the company to deviate from its strategy due to analysts and investors pressure? * Will the publicity of the IPO really benefit the company? What can happen if it goes bad? * Can KTM have an interest in being taken over by Harley Davidson? What synergies can be created through such a merger? * How can the firm structure its fund raising to attract “hands off” VC funds? * What will be the governance impact of the new funding?

* What leverage are banks ready to accept for KTM? Is it sufficient for KTM to reach a mixed operation involving a new VC investor? * Is a bond issuing consistent with the future growth of KTM (especially regarding the FCF generation)? * What interest a floating coupon would have rate over a fixed coupon rate? * Will an operation on the Euro currency help the company gain sufficient visibility? 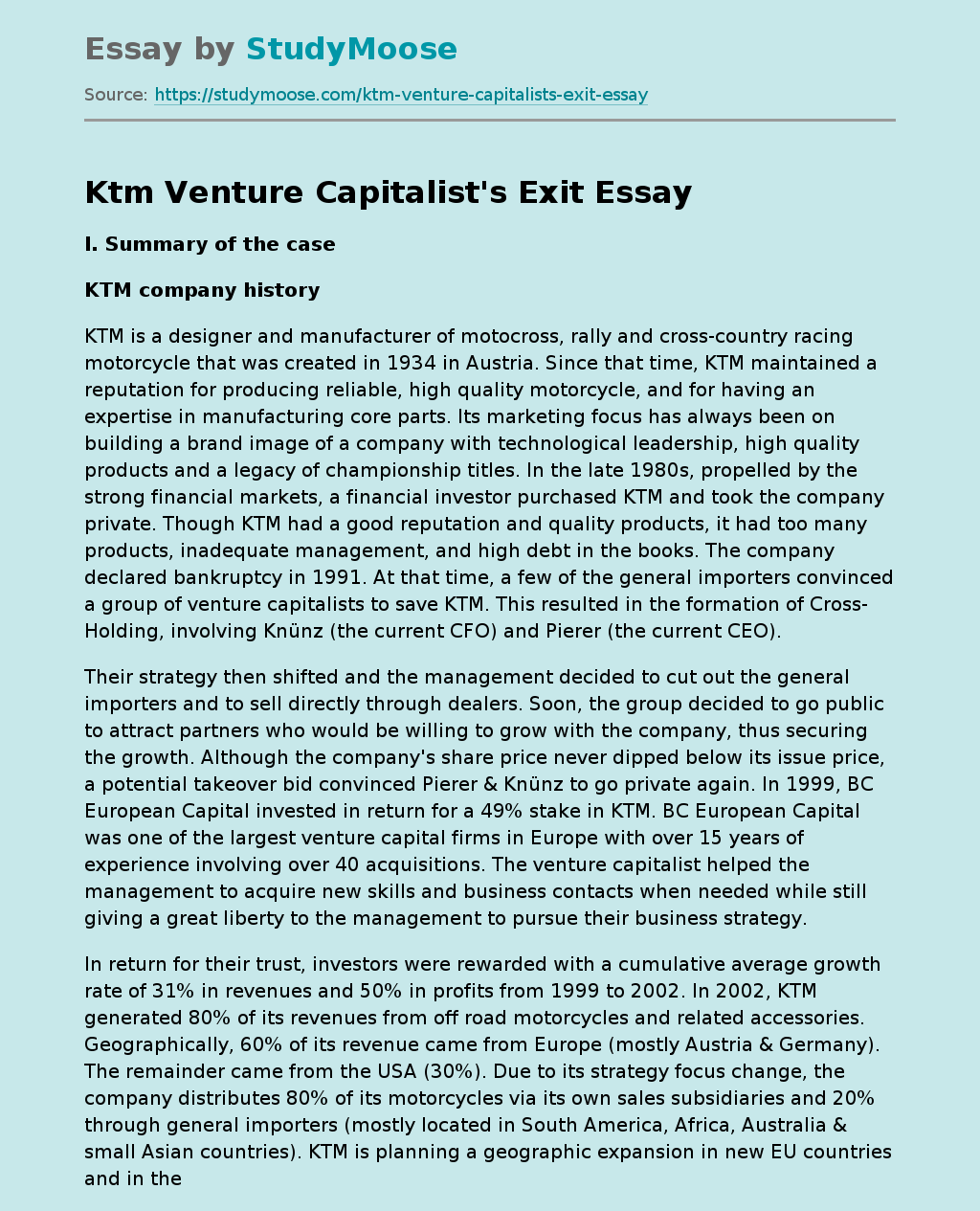