Kovic's Book Born On The Fourth Of July

An analysis of the book, “Born On The Fourth Of July”, by Ron Kovic

“Born On The Fourth Of July” This was an extremely powerful book. Ron Kovic is very able to get his point accross to the reader. He brings you throughout his life showing you, no. . . showing cannot describe the feeling adequately enough. He puts you into his life, when he goes through the trenches, you go with him. When he hits a home run for little league you can experience, not the joy it brought him at the time, but the pain in remembering that joy now that he can no longer do those things.

Don't use plagiarized sources. Get your custom essay on
“ Kovic’s Book Born On The Fourth Of July ”
Get custom paper
NEW! smart matching with writer

When he makes love with a woman in mexico you can completely understand how stirring, meaningful and frightening the experience is for him. T

his is a book about self discovery. From beginning to end, you see him struggling to survive life. He is constantly trying to be the best at everything. From the very start he was working out his arms trying to make himself bigger that way to make up for being to short.

He joined the cub scouts with his friends and marched in the memorial day parade. He hit a home run his first time at bat in little league. When he grew he joined the wrestling team and constantly won first place in competition. When he lost, it was so emotional that he would cry. He would do anything to be first, even if it meant incredible agony.

The coaches made us do sit-ups, push-ups, and spinning drills until sweat poured down our faces and we were sure we’d pass out. Wanting to win and wanting to be first, that’s whats important, the coaches told us. Play fair, but play to win, they said. They worked us harder and harder until we thought we couldn’t take it anymore and then they would yell and shout for us to keep going and drive past all the physical pain and discomfort. More! More! they screamed. OIf you want to win, then you[Ore going to have to work! YouOre going to have to drive your bodies far beyond what you think you can do. YouOve got to pay the price for victory! You can always go further than you think you can.Kovic wanted so much to be a hero, to be all of his heroes rolled up in one. He would do anything to achieve that goal.

The way that Kovic writes this book makes it even more incredible. He jumps around in his life, telling you things in, what I believe is, their order of importance to him. He begins by describing to you the feeling of being shot and what is going on around him. You follow him through the sequence of being carried off the field, moved to a hospital, moved to another hospital. You can see him winning a medal of honor. He describes to you the other wounded soldiers around him, and while you feel for him, by taking a look around the room through his eyes you get a fuller picture of just how terrible this war was. He then skip[s around through his childhood, his birthday on the fourth of July, playing with his friends. You can see just how good his life was. It was perfect, what most kids would dream of, but he never felt that he was good enough. He always thought he could do more and he could never talk to girls.

So on his graduation from high school, still trying to be the big hero he joined the marines because they were the best. You are in my platoon and if you people wanna be marines, y’all gonna hafta work harder than you have ever worked before in your lives and you are gonna have to listen to me and you are gonna do everything I tell you to do if you want to get your asses off this island alive and become marines you better listen to me. You can see the comparison with drill camp and the wrestling coach.

He gives a whole chapter to the drill sergeant yelling at them. It is an incredible chapter, filled with do this and do that and grow up, be a man, mixed thoughts, confused feelings and fear. ItOs one of the most moving chapters in the book. In everything he is confused about what to do next. While in the marines he could never decide if he wanted to go back home or stay. He could never decide whether or not he should go speak up about Vietnam. He could not decide whether or not he wanted to get married. He is constantly trying to become whatever it is he is to become. He knows he was kept alive for some reason and he is continually trying to figure out what that reason is. Which brings me to another point in the book. Even when he came back from Vietnam as a cripple, he did not speak out against it, he still believed in what was happening over there, he still believed in what he had been fighting for. Yes he had seen a lot of horrible things but he despised the college students and hippies who burned their draft cards and protested against it, and were not willing to fight for their country.

He even marched in the memorial day parade again, which was also one of the worst days of his life, being driven around in that cadallac having everyone staring at him because they couldnOt, or wouldnOt, understand. It wasnOt until the Kent State shootings that he began to question his beliefs. He began to listen to what the other side had to say. To speak up about what was really happening in Vietnam. The story feels like it is taking place over years, he does so many things that you cannot possibly see where all this time is coming from, but it only takes a couple of years to do. He went to high schools and told the kids his story, almost the same way the marine recruiters had come to his school a few years before to tell them how wonderful life in the marines could be.

He become one of the most active speakers in the anti-war demonstrations. He was even at NixonOs acceptance speech in 1972 to yell at him from the center aisle to stop the war several times and being interviewed during a life broadcast, before he was pulled out of the tent backwards by security with republicans booing and hissing al around him. Towards the end of the book he describes what happened to him in Vietnam, how each new mission was supposed to make up for the last one that had gone extremely wrong. He began to realize, after he had shot his corporal and a hut full of young, unarmed children, that everything was different out here and winning medals and being first wasnOt important anymore. But now it all seemed different. All the hopes about being the best marine, winning all those medals. They all seemed crushed now, they were gone forever. Like the man he had just killed with one shot, all these things had disappeared and he knew, he was very certain, they would never come back again. The book ends with him describing memories from his childhood.

Making plans in the backyard for his future. His mother using the hula hoop. His sister teaching him how to do the twist. Playing basketball with the girls watching. How wonderful the whole scene is compared to the gruesome descriptions from the chapters before. How easy everything was. He ends the book with these few simple words. There was a song called ORunawayO by a guy named Dell Shannon playing one Saturday at the baseball field. I remember it was a beautiful spring day and we were young back then and really alive and the air smelled fresh. This song was playing and I really got into it and was hitting baseballs and feeling like I could live forever. It was all sort of easy. It had all come and gone. Through this book and through the eyes of Ron Kovic you are able to see just how intense and difficult this period of time was. Children were brought up to be extremely patriotic and democratic.

Some rebelled and some like Kovic remained patriotic and went to war voluntarily. It took this life changing event for Kovic to change how he thought of his country. It took many deaths and many years of trying to understand himself before he could see with open eyes how unjust America had been to him and his fellow veterans. I loved this book, it is so incredibly moving and you want to cry and hope that he will be able to walk again, but he just leaves you there with the memory of that old song. You want to turn the page and find another chapter, but there is none to be found.

You want to know that everything will be all right, but it wonOt be. This is not one of those stories that you can read and then disconnect yourself from it, saying it could never happen to you. I think about KovicOs story a lot. It sticks with you in your mind very clearly reminding you of itOs existence. This is not a fictional character that you can write off, this is not just a story. This man exists and he letOs you know he it. This is one of the best written books I have ever read and, were it not so unsettling, I would read it again and again. But it is definitely one of those books that everyone should read at least once in their life time.

Kovic's Book Born On The Fourth Of July. (2020, Jun 01). Retrieved from https://studymoose.com/kovics-book-born-on-the-fourth-of-july-essay 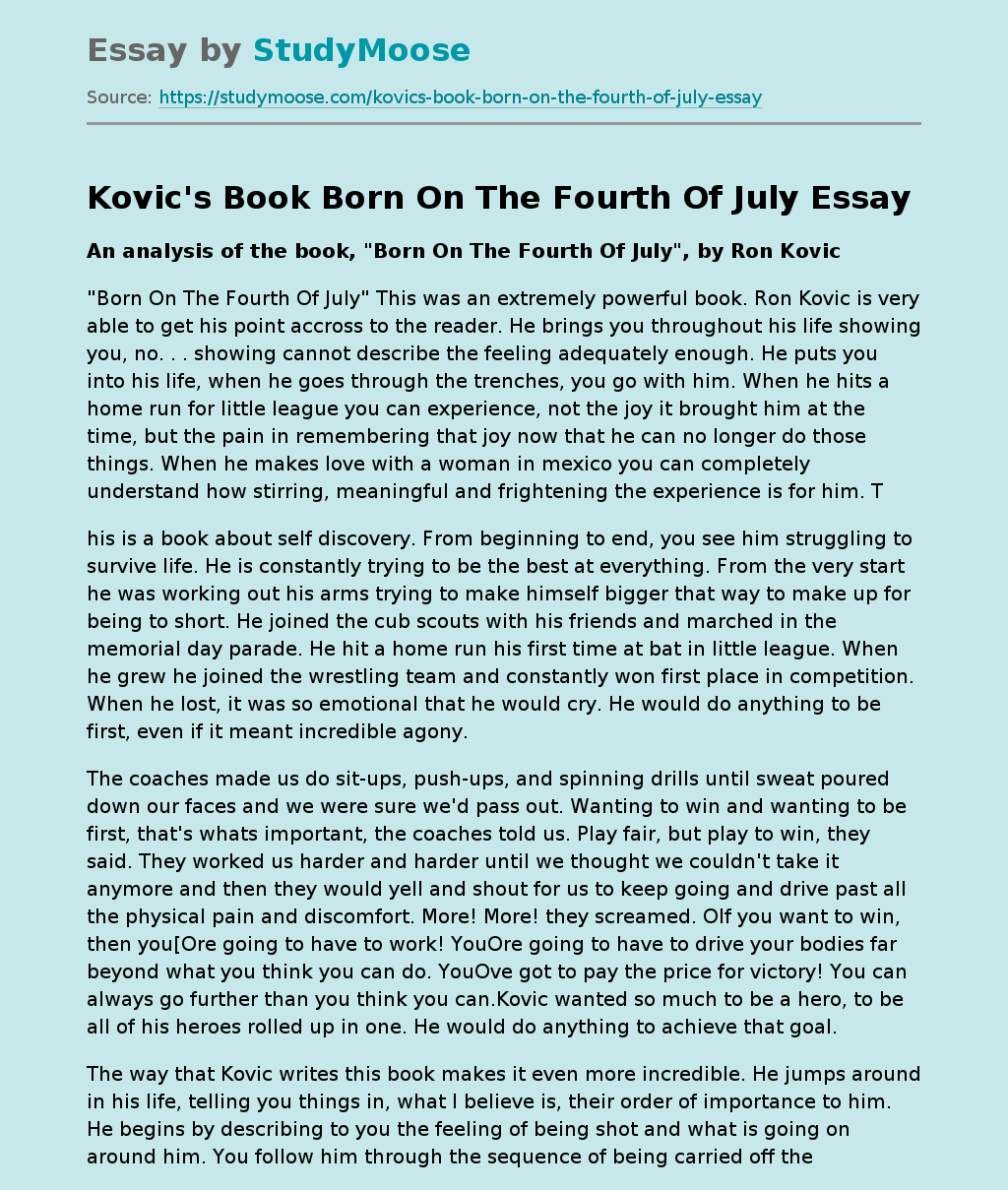