1. How was Komatsu able to evolve from a $169 million company with low-quality products to become a real challenge to Caterpillar by the early 1980s? How would you evaluate Mr. Kawai’s performance?

The long-term vision of “catch up and surpass CAT” opened up different product offerings and the extension of the Komatsu market. Initiating Total Quality Control (TQC) helped to develop a strategy to acquire and develop advanced technology. Project A also sought to raise the quality to match CAT’s levels, which marked the beginning of the Plan Do Check Act (PDAC) cycle.

Don't use plagiarized sources. Get your custom essay on
“ Komatsu Case Study ”
Get custom paper
NEW! smart matching with writer

Kawai’s performance and policies to make Komatsu internationally competitive in cost and quality leads me to think he did a great job in his role. The company was growing in sales and increasing quality and cost, actually making CAT nervous about competing with Komatsu.

2. Why did performance deteriorate so rapidly in the mid-1980s? What grade would you give to Mr. Nogawa’s term as CEO?

1982 marked the beginning of an era of falling demand, worldwide price wars, a rapid appreciating yen, and heightened trade frictions throughout the industry.

Nogawa also focused more on cost cutting and aggressive sales tactics than he did on internationalization or the stagnating construction industry. I don’t think Nogawa was a great CEO because he ignored focusing on improving the company and instead tried to cut too man costs risking quality and holding the business back during his term as CEO.

3. How appropriately did Mr. Tanaka deal with the problems he inherited? What is your evaluation of his brief tenure as CEO?

I believe Tanaka dealt with the issues pretty well with a good strategy to get away from overall growth and focusing on profits.

Although his strategy was well planned, Tanaka lacked the leadership that would have made him more successful. He did well in terms of profit, but failed to compete on market share against CAT, as had been the norm of his predecessors.

4. How effectively did Mr. Katada take charge? How would you assess his new
vision for the company? His new strategy? His new cultural and behavioral objectives? What grade would you give him for his performance?

Katada effectively took charge and was able to return to good performance and connect his strategy with his management style. Katada’s new vision for the company, including new company goals and culture, affected the entire company but because of his long-term commitment with Komatsu, employees were accepting and trusting of the changes he made. Katada changed with the times and the industry, putting Komatsu back into competition with CAT. Katada focused on active participation with all employees instead of a top-down directive approach. Employees, at all levels, were encouraged to bring ideas to management and be actively involved in the vision, path, and overall success of the company. 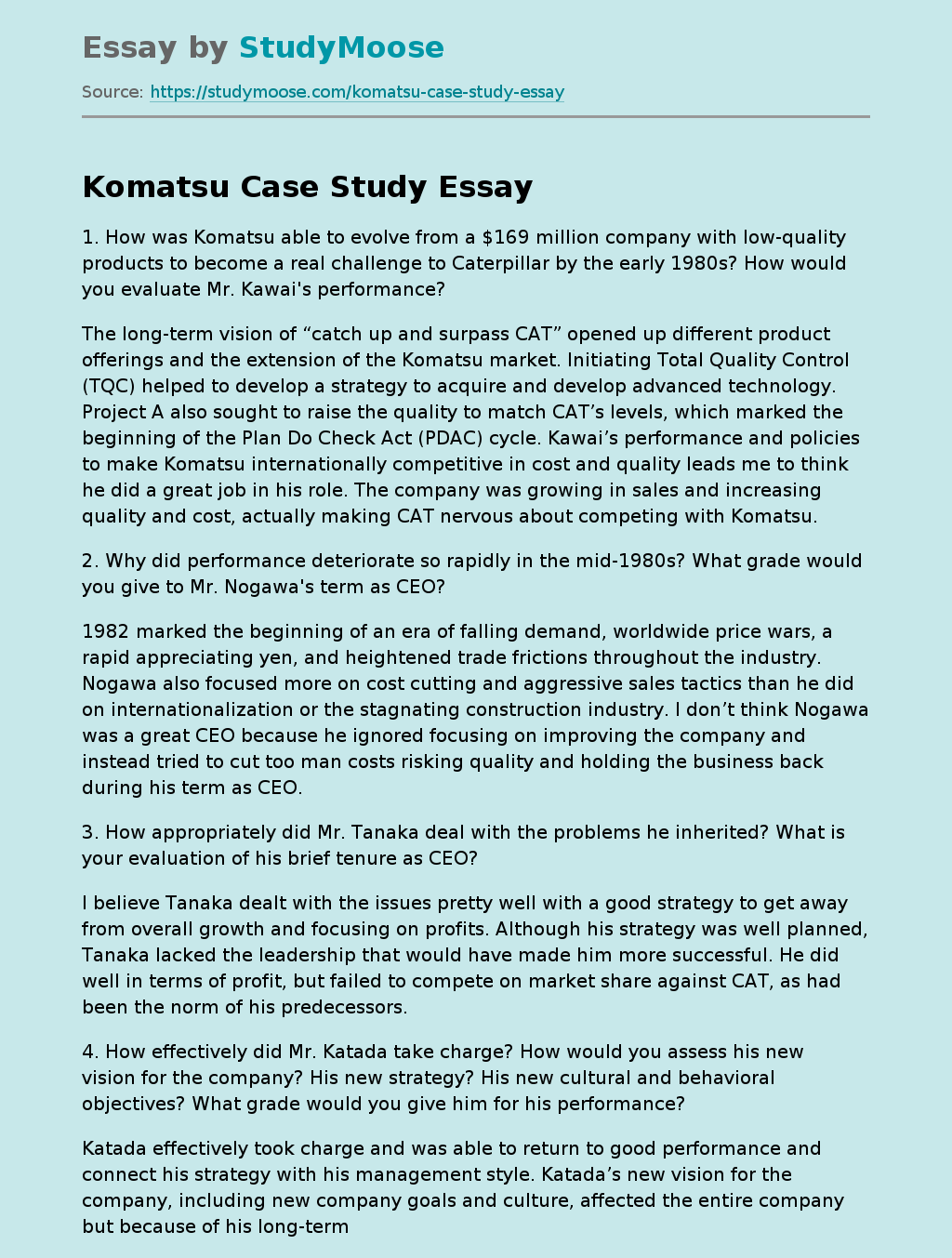