Natsume Soseki throughout this novel went into great detail about friendship and the different stages of friendship. With a little help from a man he met on the beach at Kamakura he went from a young man trying to grasp the future to a very intelligent university graduate with all his morals set straight. Soseki’s novel the Kokoro (“The heart of things”) was a very pleasant novel to read. This novel was written in 1914 which was two years after the death of Emperor Meiji.

Don't use plagiarized sources.
Get Your Custom Essay on Kokoro written by Natsume Soseki Just from $13,9/Page

Throughout this novel a lot of questions were raised and for the most part eventually answered.

Japanese people during Meiji era (1868-1912) were in the midst of a major reformation, The moderation of the country of Japan. Natsume Soseki at the later parts of the movement was perhaps the most profound and most versatile novelist of them all[1]. Japanese people at this time mostly lived in Traditional housing. By this I mean houses were usually one story basic essentials nothing like some of the houses that are being built today.

Sensei[2] on the other hand lived in non traditional housing thus meaning he had some kind of wealth.

After a few visits that Soseki had given Sensei at his lodgings I began to realize that Japanese people at this time were very humble. Although Sensei was very confused on why Soseki continued to visit him and seek knowledge from him there was never a point in the book that Sensei wished anything harmful or bad upon Soseki. Around this time of the first meeting of Soseki and Sensei, Soseki was going through a change as well. It states that over the couple months that Soseki went home to be with family and his return to Tokyo that he was no a University student.

This caught my eye because it states that he was a college student before[3]. After much research on this topic I could only come to a few assumptions of what this could meant. First “College” student might mean high school student here in the US. Secondly it might mean undergraduate whatever the true meaning behind it is it definitely caught my eye as intriguing that their educational system was different. Sak’e was a traditional alcoholic drink in Japan at the time. Sensei states “Drinking sak’e does you good to drink occasionally[4]”.

I could not begin to think that during this reformation that Japan was going hrough that Sensei was the only one drinking sak’e. Although Sensei’s wife was not the biggest fan of the drink Sensei sure did enjoy it. Looking at the relationship between Sensei and his wife I couldn’t help to notice the extreme devotion they had towards each other. Although throughout the book Sensei’s wife Shizu always seemed to express herself more, you could tell that Sensei had the same devotion. Shizu was always very obedient to Sensei needs. I imagine that this was custom for women at this time in early Japan to be very obedient to their husbands.

It’s about this time when Sensei first learns about the Sosekis ( Soseki) father being extremely ill. After hearing the symptoms of his father’s illness the reader begins to realize that Sensei is extremely smart and knows far more then the typical man during this era. Yet Sensei remains unemployed. In today’s world most college students continue their education after high school for one purpose and that purpose is usually to get a nice job and to become financial independent. Chinese people during this time by know means had the same state of mind as us in the United States right now.

Throughout this novel I also began to wonder about how Chinese people interacted with each other Sensei was very secluded and did not want affection from anybody he also was very reluctant to trust anyone at one point Sensei asks, “is your family very wealthy”[5] he then goes on to say that if you “Give a Gentleman money, and he then becomes a rogue[6]. Sensei could not have been more right. His distrust in people and his generalization of the people of his day seemed to be somewhat crazy to the university student he had told.

Later on in the book the Soseki father has passed along with his mother around the same time. His uncle who he had trust in persuade him to let him take over the house and the inheritance while he was in Tokyo continuing his education. Sure enough the exact words Sensei had told his peer happened. The uncle dwindled the inheritance of the Soseki thus causing hatred between the two sides. At this time I feel like very few people could be trusted altogether. If you had money there were always people trying to manipulate you and steal what in essence was given to you.

Sensei said he could trust nobody and liked no body except his wife. The Soseki after the loss of inheritance to his uncle “I have come to hate the entire human race”[7] . This sounds exactly like something Sensei would have said thus leading to question if most people at this time felt this way. This novel was very enjoyable to read. I must admit I’m not a big reader but this novel kept me hooked. That being said the last point I would like to get to is a very serious one suicide. Suicide is a very serious problem in today’s world.

Honestly before reading this novel I really only thought it was a problem now and not so much in the early 1900s. What surprises me the most is these three men in this novel committed suicide because they all felt they were disconnected if you will to what they had yearned for. None of them tried to reconnect. I cannot help but wonder at these times was it very traditional for a man or woman to commit suicide. Between illnesses these men were facing to the every day stress of financial stability and the devotion these men had towards their wives suicide might have been thought as the best option at the time. 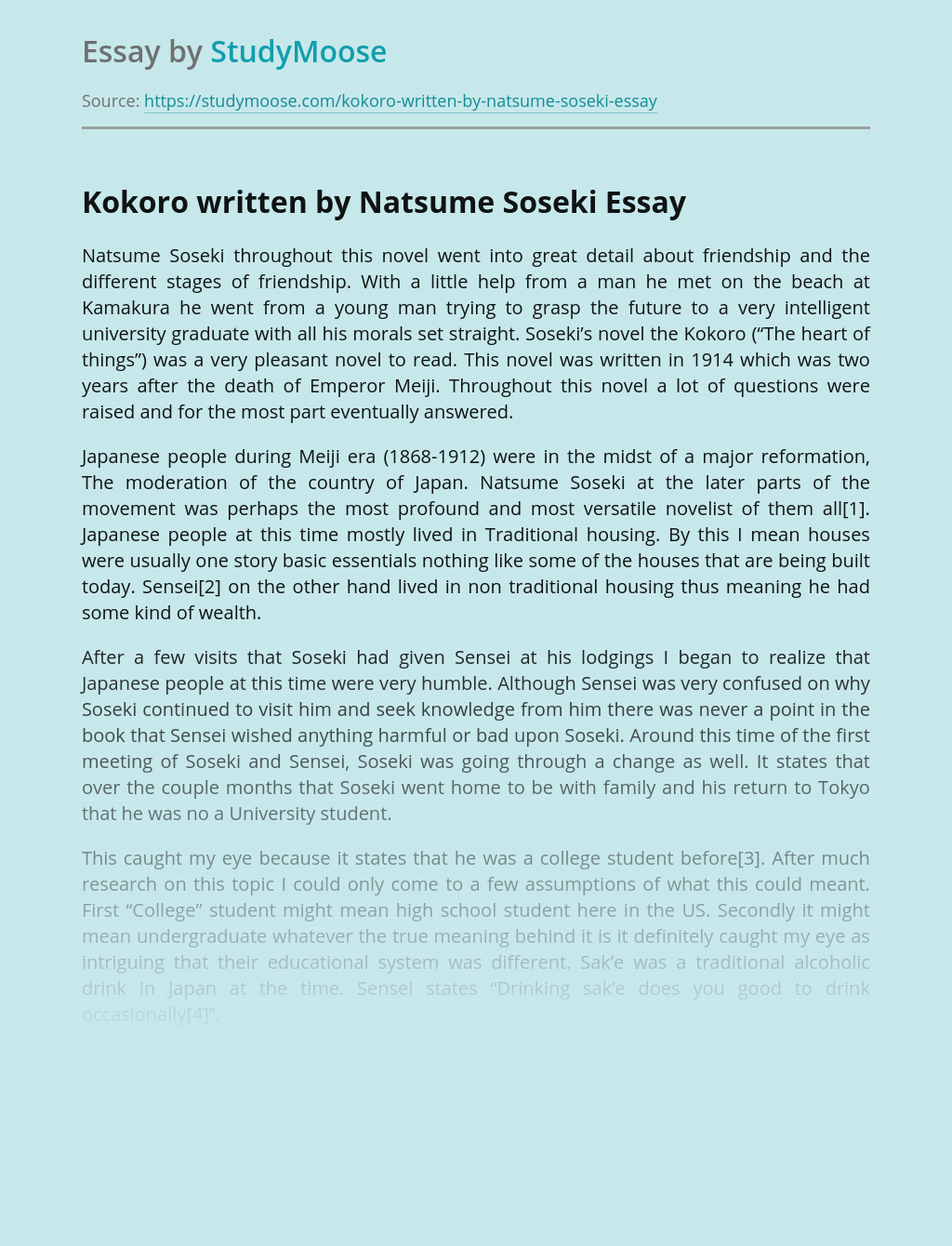