In the early 1990s, Kodak entered Russia. At the time, the country was deep in the middle of a turbulent transition from a Communist-run command economy to a fledgling democracy that was committed to pushing through the privatization of state-owned enterprises and economic reforms designed to establish competitive markets. Kodak’s entry into this market posed a number of challenges. Russian consumers had little knowledge of Kodak’s products, and the consumer market for photography was very underdeveloped.

Moreover, apart from state-run stores that were generally poorly run, here was little or no infrastructure in place for distributing photographic equipment and films and for processing film.

To compound matters, Russian consumers were poor and unlikely to be able to afford all but the most inexpensive cameras and films. A decade later, Kodak’s entry into Russia is widely regarded as a major success. Russia accounts for a significant proportion of the $2. 59 billion in international sales in emerging markets that Kodak registered in 2004; and with a growth rate of 26 percent over the prior year,

Russia is the fastest-growing emerging market for Kodak, outstripping even China.

How did Kodak do it? First, Kodak had a clear and consistent marketing message that it communicated to Russian consumers through a number of media, including radio, television, and print advertising. The marketing message was based upon the idea of “saving memories” by taking pictures in a quick and easy way. “You press the button and we will do the rest” the ads stated. As it turned out, this was the perfect message for a consumer market that was not used to photography.

To complement the core marketing message, Kodak spent heavily on promotional campaigns, exhibitions, conventions, sponsored events, and the like, in an attempt to educate consumers and raise awareness of the Kodak brand name. For example, in addition to standard media advertising, Kodak owns a traveling photo park with a fleet of hot air balloons that have become very popular in Russia. Kodak has also invested heavily in promoting a corporate image as a firm that takes a stand against corruption and black market practices. The company has been ery clear about its business practices and about its refusal to engage in shady dealings.

In a country where such practices were once commonplace, and still persist to a degree, this stance has been well received by consumers and has helped to build the company’s brand image as an enterprise that can be trusted—which, as it turns out, has been good for business. Kodak also boosted its corporate image by opening a factory in Russia to produce cameras, film, and chemicals for film processing. In addition to the public relations benefit, this move lso helped Kodak lower its costs by utilizing cheap Russian labor and by avoiding tariffs on imports of photographic products into Russia.

Recognizing the limited income of Russian consumers, Kodak’s product strategy has been to sell lower-end film and cameras in Russia. Kodak offers simple cameras for around $20 to Russian consumers, something that the company can afford to do because the cameras are made locally. It does not sell disposable cameras in Russia, since at $10 each the cost would be too high. Instead of trying to sell top-quality Kodak Gold film, hich is popular in the West, the cheaper brand, Kodak Color Plus, is marketed heavily in Russia.

Another of Kodak’s marketing tactics has been to try to build demand for its products by encouraging major enterprises to give cameras to valued employees, rather than the traditional bottle of vodka. Kodak has also worked closely with travel agents, giving them cameras to give away to their customers. Kodak’s hope, of course, has been that consumers will purchase Kodak film to use in these cameras, and to a large degree, that seems to have occurred.

Finally, Kodak realized that it needed to build a distribution channel for its products. Rather than invest directly in its own stores, the company set up a franchising program to open Kodak Express stores throughout Russia to sell its products and develop film. These owner operated stores adhere to strict business guidelines Kodak set down in its master franchise agreement. The stores are clean, attractively designed, have a consistent appearance that helps promote the Kodak brand, and are staffed by friendly and polite employees.

These stores rapidly set a ew standard for retailing in Russia. Within three years, more than 350 Kodak Express outlets had opened in Russia, and today there are several thousand. This case describes how Kodak entered Russia and promoted their product throughout. It describes how they marketed their product and adjusted to the economy of Russia. They also adjusted their production of cameras and film to the area by opening a factory in Russia to reduce costs. Opened a franchising program in Russia to distribute their products through local stores instead of investing in Kodak specific stores. 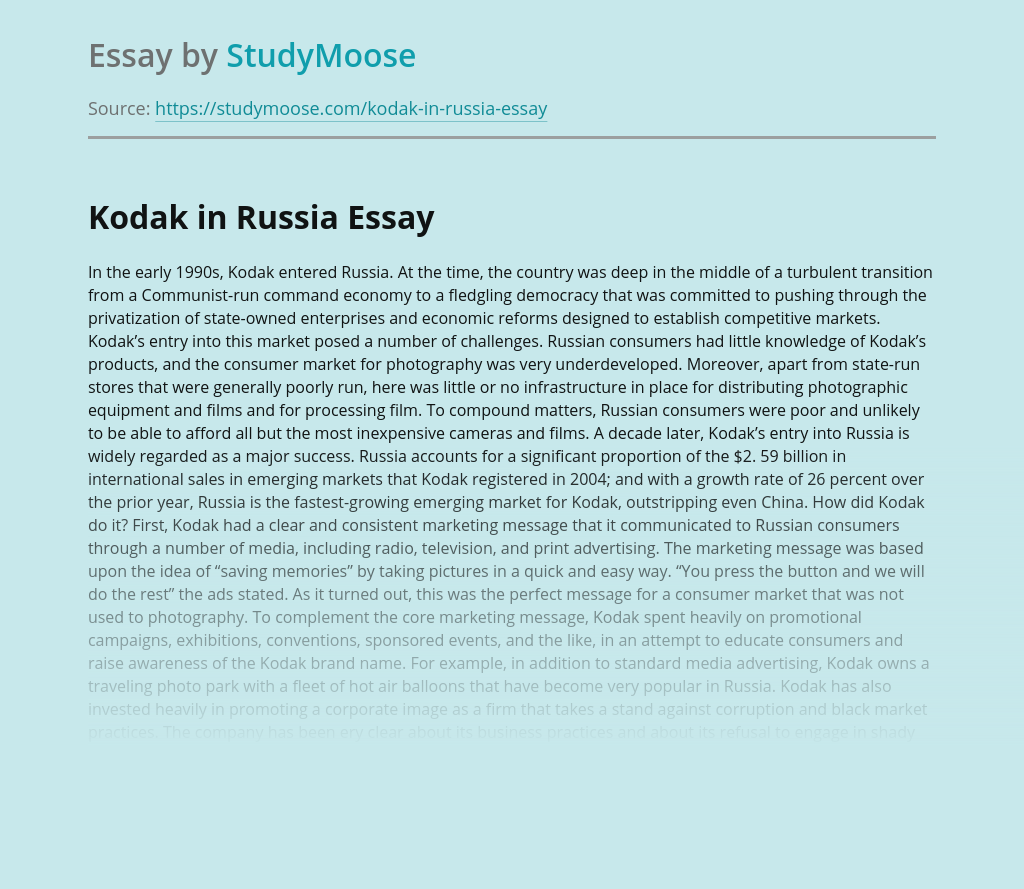 Don’t waste time
Get a verified expert to help you with Kodak Franchising in Russia
Hire verified expert
$35.80 for a 2-page paper
Stay Safe, Stay Original