In the novel “The Kite Runner,” by Khaled Hosseini, one of the main themes is the influence and importance of the father-son relationship, specifically the influence and importance that Amir’s father has on him from his early childhood all throughout his life and into his own experiences as a father. Throughout the novel, Baba, Amir’s father, guides Amir through certain events which are crucial to his coming-of-age, and does it in a way in which it is not always clear what his intentions are.

Don't use plagiarized sources. Get your custom essay on
“ Kite Runner: Baba and Amir ”
Get custom paper
NEW! smart matching with writer

Baba takes Amir out of Afghanistan before the Soviet invasion, and while not specific events, he leads Amir by example, and helps him to get out of his shell and experience America at last. Throughout the novel, Amir makes it very clear that he aspires to become Baba’s favorite, and generally wants to be in good graces with his father. What he does not realize is that he already is in good graces, being Baba’s son, as Baba views his duty as a father to be the most important aspect of his life, and always strives to protect his sons.

This is most evident when Baba risks all of his possessions, his career, and his own safety, in order to evacuate his son from Afghanistan before the Soviets invade and take over. Baba had been leading a very successful life in Kabul, but when news of the Russian invasion came, he evacuated his son and himself as fast as possible, leaving “dishes smeared with kofta….

laundry in the wicker basket… Baba’s business suits hanging in the closet. (Hosseini 112) Baba left Afghanistan physically, but he also left emotionally, which took a great deal of maturity to do, and while Amir did not realize it at the time, this act instilled in Amir the knowledge that he might have to me the mature one when he became a father. Throughout their trip out of Afghanistan, Amir incurs what he sees as ridicule from his father and humiliation for his fathers actions. He believes his father ridicules his weakness as he “lifted the tarpaulin, and threw up over the side of the moving truck. (111) However, Baba is really teaching him a lesson in behavior, especially amongst strangers who might be dangerous, to never seem weak and suspicious. Amir does not notice this because he is too busy being afraid of his own father. In a nutshell, the entire sequence of events in which Baba and Amir escape Afghanistan is actually one of the most positive and influential events between the father and son at that point in the story.

Another, more general way in which Baba is a positive influence on Amir is not through any direct interaction between the two, but rather through Amir’s observation of Baba’s way of going about life. In other words, Baba is very important to Amir’s upbringing through his practice of leading by example. One of the key situations is when Baba forgives Hassan for “stealing” Amir’s watch and money. Throughout his childhood, Baba had reminded Amir that “there is only one sin, only one. And that is theft. (17) However, in this instance, he let’s Hassan pass without punishment, even though he had broken the one sin Baba believed in. While not an immediate influence, later in life, this gave Amir the courage to see past other people’s weaknesses and faults, and forget his own prejudices when dealing with people, especially his now deceased best friend Hassan, who was of Hazara descent. Similarly, Baba had shown Amir early in life how to treat others correctly, even if they were not of the same ethnicity as you, or perhaps the same social class.

Baba was always best friends with Ali, who is a Hazara and Baba’s housekeeper, since the day Baba’s father took Ali in off the streets, and “Ali and Baba grew up together as childhood playmates… just like Hassan and I grew up a generation later. ” (25) Baba’s childhood actions had greatly impacted his own future, and therefore influence the childhood and future of his son, showing him to be accepting of people and not to believe the prejudices that other people talked about. In Amir’s life, Baba’s “silent” influence was likely the one of the greatest importance.

Finally, while occurring later in both Amir and Baba’s lives, Baba helps Amir in the way of getting him to come out of his shell, mostly while adjusting to life in the United States. The most obvious way that Baba’s accomplishes this is by helping Amir gain the Generals daughter’s hand in marriage, in the proper Afghan way. This was the turning point in Amir’s life, where he could begin to deal with his past, because of Soraya, his new wife. “In the rear view mirror, Baba was hobbling up the Taheris’ driveway for one last fatherly duty. (163) One of the very last ways in which Baba helps Amir in America is believing in him, for once, as Amir views it. While Baba had always viewed Amir’s interest in writing to be a waste of time, in the end he actually gets Amir to believe in himself and share his work with other people. Baba showed Soraya the first story Amir had ever written, breaking the tension, and even making Soraya not “believe you can write like this. ” (172) This is one of the last things that Baba does for Amir before he passes away from cancer in his sleep, and it proves to be very important to Amir, instilling in him a onfidence that he had finally made Baba proud and had seemingly done something useful with his life. In conclusion, Baba is one of the most positive influences throughout Amir’s life due to his physical evacuation of Amir from Afghanistan, his leader-by-example mentality, and his help with Amir’s problems with shyness and timidness. Baba plays a pivotal role as a leader and a mentor, and while Amir and Baba’s relationship is strained at times, they fight through and are both better people for it. 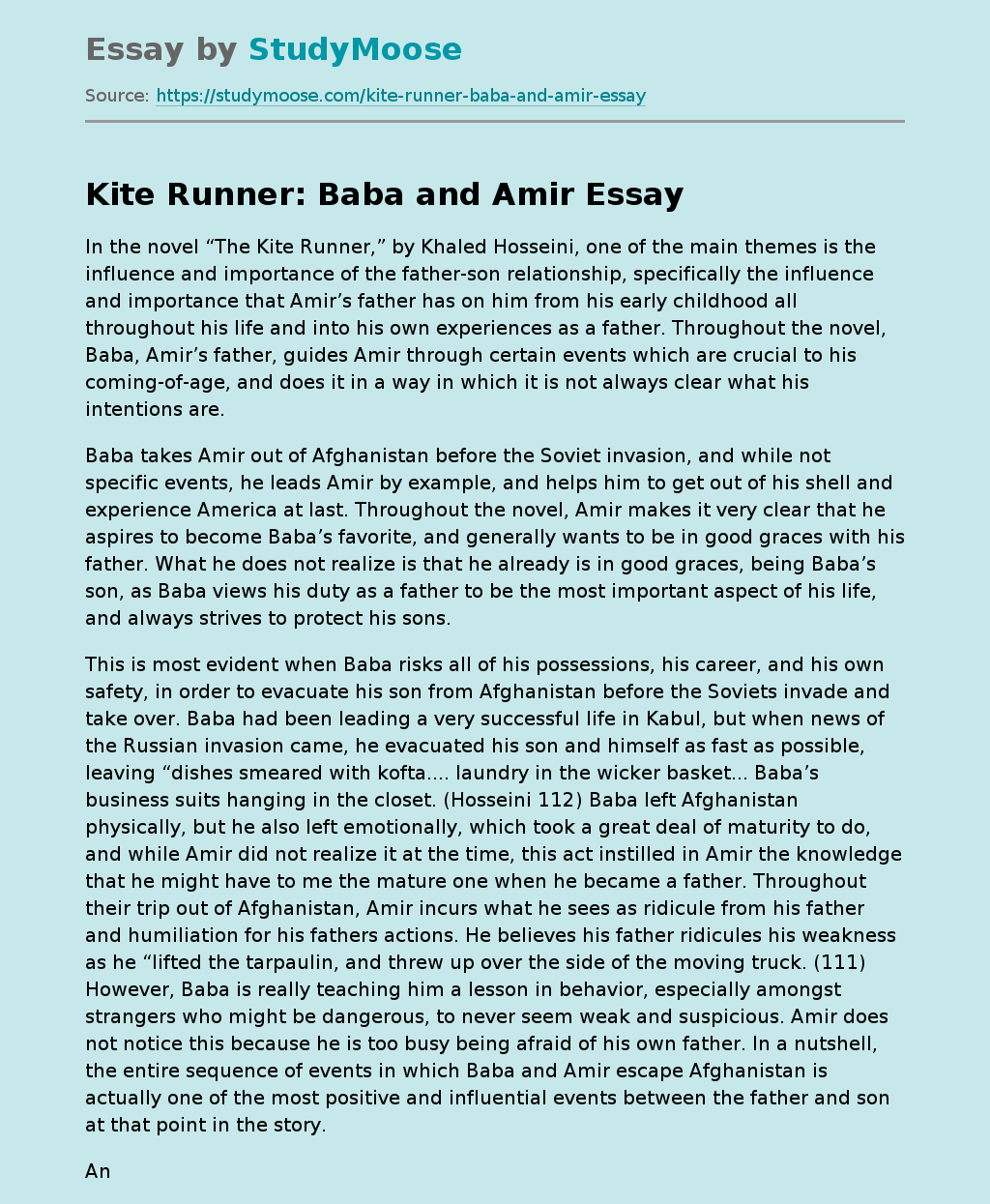