King Lear is a metaphorical tale of an ailing man’s journey through hell in order to forgive his sins. Lear’s untimely, sinful surrender of his throne results in a chain reaction of events that send him through a treacherous journey. It is a tale that graphically describes the consequences of one man’s foolish decisions; decisions that greatly alter his life and the lives of those around him. Lear suffers terribly, as a result of ignorantly dividing his kingdom among his eldest daughters, Goneril and Regan.

Turn in your highest-quality paper
Get a qualified writer to help you with
“ King Lear’s Foolishness ”
Get high-quality paper
NEW! AI matching with writer

By the time he realizes his daughters’ tyrannical nature, it is too late, and they have already begun their plot to kill him. Amidst his increasing insanity however, Lear does become a wiser man, as he finally receives the ability to see people’s true faces, something he from which he had been blinded from for so long.

Lear was foolish in many ways, and was viewed that way by many different people.

His most foolish move was questioning the love of his three daughters, Goneril, Regan and Cordelia. He created a contest which would reward the largest third of the kingdom to the daughter whom loved him the most, “Tell me, my daughters (since now we will divest us both of rule, Interest of territory, cares of state), Which of you shall we say doth love us most? That we our largest bounty may extend where nature doth with merit challenge.” (I, i, 47-53) He planned to divide the kingdom among the three to prevent strife, not realizing that it was an invitation to civil war instead.

He asked his daughters to tell him how much they loved him in public. After Goneril and Regan flattered him with lies, Lear gave them third and second prize.

When Cordelia, whom the largest piece of the kingdom was reserved for, refused to play the same flattery game as her sisters had done, Lear’s rage exploded. Cordelia could have easily like her sisters, however she did not care to be rewarded with land and riches under false pretences. Lear, being blind to this, disowned Cordelia and banned her from her homeland. Foolishly, Lear also banished his only loyal follower, Kent, for sticking up for Cordelia, “To plainness honour’s bound when majesty fails to folly. Reserve thy state and in thy best consideration check this hideous rashness.”(II, i, 36-42) Assuming God’s duty was Lear’s primary downfall.

He was King of England because God had put him there, and it was God’s decision as to when he should be dismissed. Lear, however, put his fate into his own hands, and attempted to pass on the kingdom himself. It can almost be said that Lear’s suffering was God’s revenge upon a man who refused the gift of supremacy. Even Lear’s fool, who many consider to be Lear’s own conscience, tells him that he has been foolish in his decision making:

Fool: If thou wert my fool, nuncle, I’d have

Thee beaten for being old before thy time.

Fool: Thou shouldst not have been old till

Immediately after Lear divides the kingdom in half among his two tyrannical daughters, Goneril and Regan seek revenge upon Lear, and begin to plot his death.

Lear is incredibly ignorant, and honestly believes Goneril and Regan’s claim that they truly love him. Only when it is too late, does he realize that the only daughter who does in fact love him, he did outcast. After Goneril only allows Lear fifty of his hundred servants and soldiers to spend the night, Lear questions her actions, and in doing so questions her true love for him. Insulted, he goes to Regan, thinking that she will be kinder to him, however Regan acts much harsher than Goneril, and only allows him twenty-five followers for the night. Upon seeing this, Lear angrily realizes that his two eldest daughters are wicked and do not love him at all.

As king, it can almost be said that Lear was sheltered, as he never had to deal with problems himself, however now that he is simply seen a peasant, Lear no longer has the luxury of people making his decisions for him. He blindly draws the conclusion that though it probably isn’t much, Goneril must love him twice as much as Regan, if she will allow him twice as many followers, “Thy fifty yet doth double five-and-twenty, and thou art twice her love.” (II, iv, 291-292).

As the play progresses so does Lear’s madness. After returning to Goneril’s and being locked out, Lear sets out for Dover with the fool. However as Lear becomes more insane, and his madness increases, he receives the vision that he had been blinded from before. Upon encountering Edgar, as Poor Tom, Lear becomes completely mad. “Here’s three on’s are sophisticated! Thou are the thing itself; unaccommodated man is no more but such a poor, are forked animal as thou art. Off, off, your lendings.” (III, iv, 109-112) Many misinterpret this scene as Lear’s final surrender to madness, however this scene is possibly where Lear becomes most sane.

Lear realizes that sophistication is dressing up nicely to give the impression of being something you really are not. He sees Edgar in his plain clothes and starts to rip his own clothes off to get away from the trickery and the falsehood of the world, as he sees Poor Tom has done. His daughters dressed up their words with lies to get what they wanted and Lear realizes that without clothes you cannot distinguish the difference between a king and a beggar. King Lear’s vision is no longer hampered at the peak of his madness because although he is mad, the words he speaks make sense and have truth to them:

Lear: They flattered me like a dog, and told

Me I had white hairs in my beard ere the

To everything that I said! “Ay” and “no” was

No good divinity. When the rain came to wet

Me once, and the wind to make me chatter;

When the thunder would not peace at my

Bidding; there I found ’em, there I smelt ’em

Out. Go to, the are not men o’their words!

They told me I was everything. ‘Tis a like-I

All of the pain that Lear suffers can be traced back to the single most important error that he made. Lear chose to give up his throne. Out of pain and anger, Lear banished Cordelia, and split the kingdom into two halves, divided among Goneril and Regan. This one sin bears massive repercussions upon Lear, and the lives of those around him, eventually killing almost all of those involved. Lear does not realize the mistake that he has made, until he suffers the banishment of his two eldest daughters. The fall of Lear is not just the suffering of one man but the suffering of everyone down the chain. Gloucester loses his status and eyes, Cordelia and Kent banished, and Albany realizes his wife’s true heart. Everything that happened to these characters is affected by Lear’s ultimate decision. If Lear had not banished Cordelia and Kent then the two sisters would not be able to plot against their father. Lear cannot see the true faces of people, and this is his tragic flaw. The pain and suffering endured by King Lear eventually tears down his strength and sanity, and leads to his ultimate demise, death. 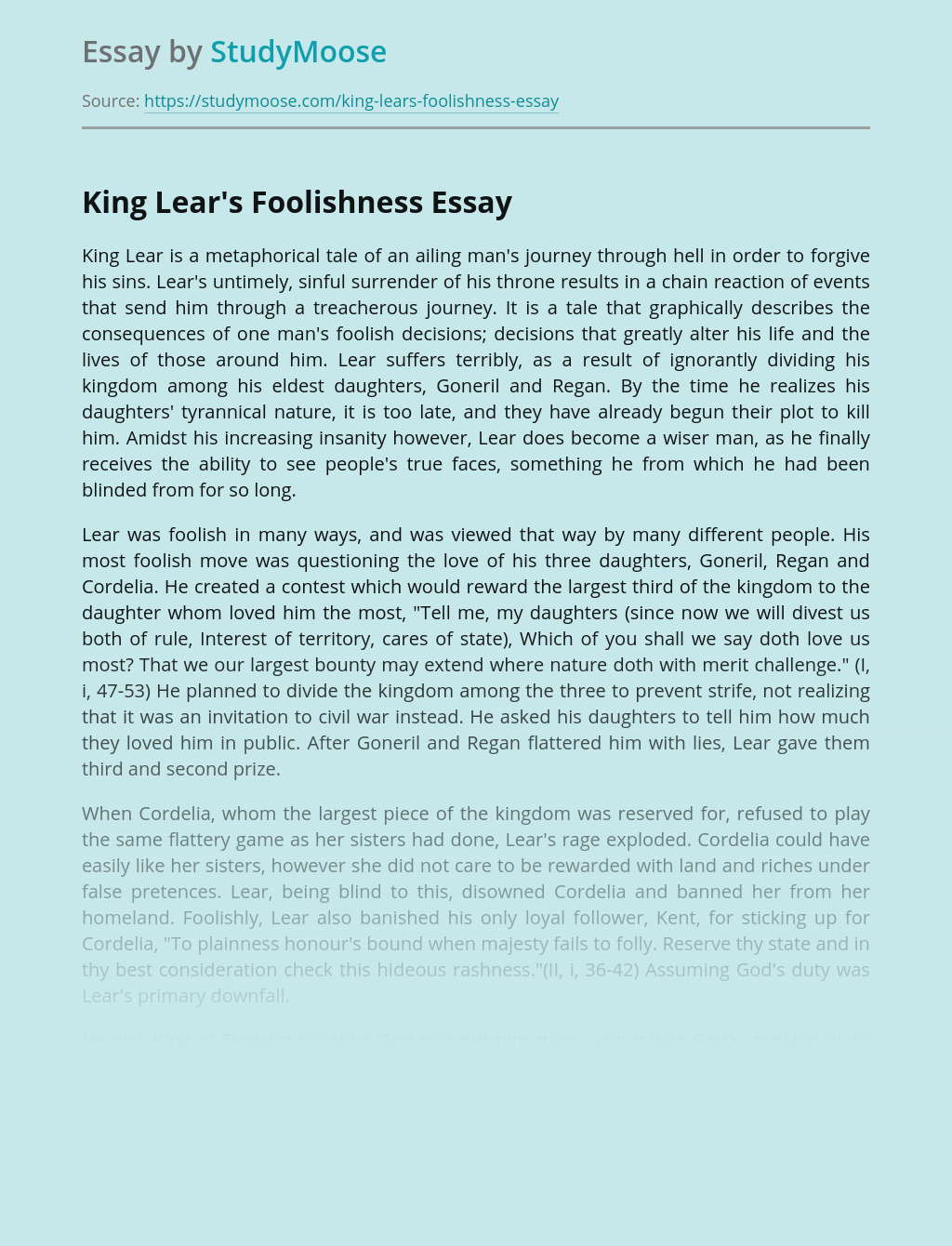 Turn in your highest-quality paper
Get a qualified writer to help you with
“ King Lear’s Foolishness ”
Get high-quality paper
Helping students since 2015
Stay Safe, Stay Original